When will Hollywood get it? People need to be trained in proper handling of firearms, “props” or not. And they’re one of the biggest anti-2A contingents out there; maybe this is why, they haven’t got a clue.

No word yet what happened, but I’m predicting it’ll be some kind of stupid behavior. 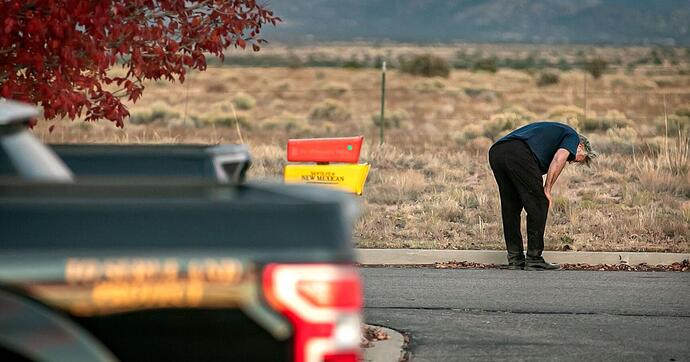 This has happened how many times? Sheesh!

They may call it “accident”… but we all know the real name for such behavior.

It’s an Alec Baldwin movie. The Hollywood hypocrite shouldn’t have allowed a gun, not even a replica gun on the set. They should’ve just used CGI.

Alec Baldwin is a Hollywood elite, he doesn’t make mistakes, he committed murder, why is he not being burned at the steak, beheaded and displayed on an Oscar statue, while his body is interred in solitary confinement cell at some black site being tortured to find out why he shot and killed somebody! The crying is definitely Oscar worthy!

Isn’t it time the US attorney general issues a memorandum on Hollywood domestic terrorism? I want to know, is he still permitted to fly, I may be on a plane with a true terrorist, is anything being done to stop this and all the “ACTORS RAGE”. This is devastating news. This is worse than Idi Amin. These actors need to be reigned in, no pun intended. Where are all the Generals and when is the congressional hearing!
Furthermore isn’t he committing a felony buy not wearing a mandated mask out doors for a company that employs more than 100 people?
We don’t need investigations, don’t we just throw you in solitary and work it all out in a year or so?

I believe this is not his fault. Of course he had a prop rifle, pointed it directly at the camera and pulled the trigger. This is how you film a motion picture. It is not his responsibility to check the prop weapon for function, and in all likelyhood it was entirely a terrible accident, because I read the injuries were caused by fragments, not bullet.
Of course we know Alec Baldwin is a raging hoplophobe. Can discuss role of premonition in phobias I suppose.

The article I read said the gun was loaded with a live round. Why would they even have live rounds on a movie set.

I don’t like him, but, I wouldn’t wish this on anyone.

It is not his responsibility to check the prop weapon for function,

Sorry, he’s entirely responsible! This whole administration is responsible, from the radical left wing toilet bowl cleaner to the disrespectful Alec Baldwin. LETS NOT FORGET THE MCLOUSKEY’s who in fear for their lives, came out, legally, with their guns to to protect themselves from 500 rioters and they were charged. No I’m not going to forget any of this, the past six years are engraved on this old brain! I will NEVER forget what they turned this country into with the help of people like the “great” Alec Baldwin.

If someone hands me a Nerf Gun, dart gun or a water gun I’m checking it. A prop gun that fires projectiles, of course I’m going to check especially if I’m going to be point the muzzle at someone.
Absolutely NO excuses for this, it’s Manslaughter One, a class one felony 4-15 years. It comes with the territory, someone hands you a firearm, you check It and check it again, should be second nature!
When I’m about to clean my firearm I check it twice then my wife checks. There’s no such thing as an “accidental” discharge! He didn’t check and he physically pulled the trigger! You and I would be raked over the coals!
Prop or no prop. You check!
Why do I get the distinct feeling this would NOT be covered under USCCA terms?
From what I’ve read she was enjoying her freedoms in the United States of America, until socialistic communists like Alec Baldwin took it all away from her. He killed her, the ultimate in Cancel Culture! If that constitutes malice it jumps to 2nd Degree Murder! Now is the time to set the example, he should hang! Please tell me we are not going to feel sorry for this guy! Honestly six years ago, I might have given him the benefit of the doubt. There is NO DOUBT

There are a lot of theories and opinions out there this morning, it was Baldwin’s fault, it was the prop master’s responsibility. Hopefully, time will give us honest answers about what really happened. Let’s take a step back however, and look at this from a broader perspective.

We here are responsible gun owners. We understand, and take gun safety very seriously. We train and practice it. We know that it is each of our individual responsibilities to make sure the firearm we are handling is in a safe condition. Why doesn’t Hollywood?

Who among this community would take a gun that was handled outside of our direct view, and trust that it is ready for its intended purpose? (Remember the cop who shot himself in the hand with a loaded pistol from behind the gun counter?)

In one sense, Hollywood needs broader latitude; there’s not going to be much action or suspense in a gun movie if the actors can’t point guns at each other. But for that very reason, other safeguards need to be much more stringent. It’s called the “film industry,” so why doesn’t OSHA and every other entity, from actors unions to studios, require actors, prop masters, anyone who will be handling a gun, to have completed a thorough safety training program before they’re allowed to even touch a gun while practicing their trade?

Maybe it’s not the industry standard, although it should be, but everyone in the chain of custody of a gun is responsible for it being in a safe condition. Someone being injured or killed because this was violated is tantamount to reckless endangerment or negligent homicide.

I’m not making light of the fact that one person died and another was seriously hurt.

But, this tragedy couldn’t happen to a nicer guy. 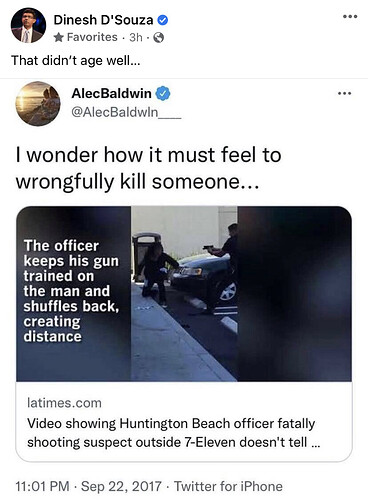 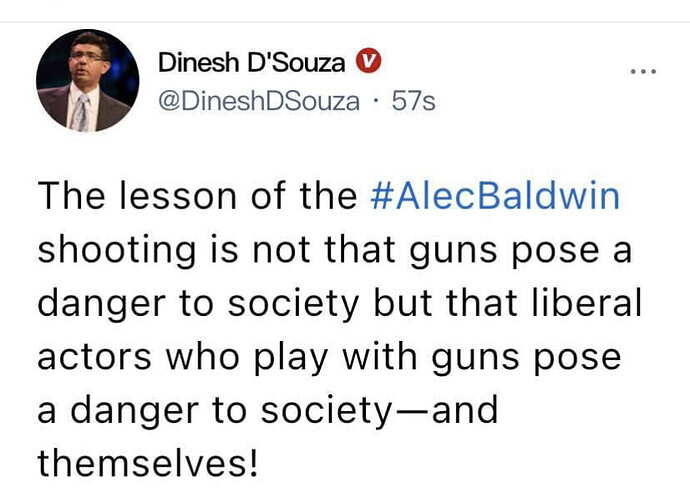 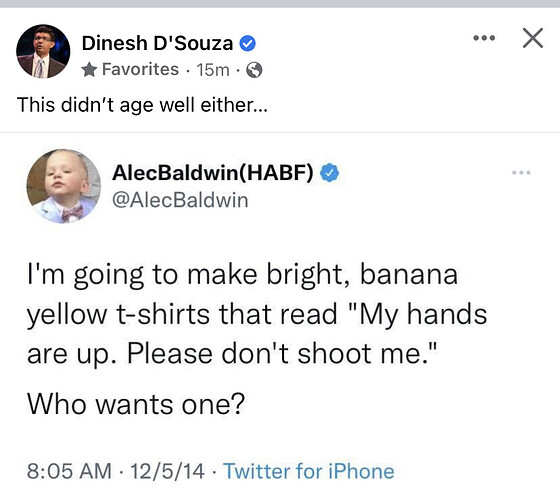 I’ve worked in the Entertainment industry for almost 3 decades.
The Prop Master (or weapons consultant) is responsible for training the actors in safe handling of the weapons.
From what I’m told, the Prop Master’s union didn’t have a rep on site as the entire crew was locally staffed.
I’m actually torn on this one.
I feel for everyone involve, but at the same time, when someone has a gun on their person, they are responsible for the safety of those around them.
Being on a movie set doesn’t absolve someone of that responsibility.

…he had a prop rifle, pointed it directly at the camera and pulled the trigger. This is how you film a motion picture. It is not his responsibility to check the prop weapon for function…

I think it’s worth noting that “prop” is short for property — it doesn’t necessarily mean fake. In addition to the real tragedies, I suppose there is at least one property, firearms, and/or pyrotechnics expert who will never appear in film credits again. Especially if a live round was somehow on set and found its way into a gun.

It would be nice if everyone everywhere — including actors — were obliged to be trained, competent, and observant of safe gun handling practices. Some are, some aren’t. Maybe that’s a good thing for OSHA and unions to look into. Or is that totalitarian overreach?

But, if an actor is:

how does the actor (even one you don’t like) become a principal culprit in the bad outcome?

I think if Baldwin gets jammed up on this it is likely to be for his role as producer on the film (i.e. something of an employer responsible to assure worker safety, cf. OSHA) — not because he was the person who pulled the trigger.

Stunts and effects are known to be hazards in entertainment, and it is important that they be mitigated as much as practical — just like any other workplace.

Brandon Lee was killed when he pointed a gun loaded with a blank at his head and pulled the trigger, not realizing that even blanks discharge material when fired. 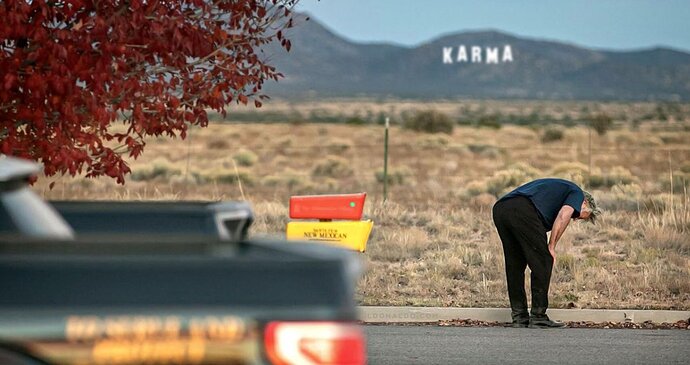 I always thought someone hit him in the torso.

how does the actor (even one you don’t like) become a principal culprit in the bad outcome?

So if my wife loaded my firearm and I negligently discharged it and killed somebody, I would not be responsible, how does USCCA cover that one?

Still bigger picture remains. Headline - Antagonistic Anti-gunner, Socialist kills innocent with toy gun loaded with live ammo, NOT CHARGED!
You can spin this til we are dizzy, he still took a life, just like any drunk driver! Radical liberal leftist are obviously ABOVE THE LAW!
Why are we giving him a pass?

It was John Eric Hexum who shot himself in the head with a blank. Brandon Lee was hit in the torso.

So if my wife loaded my firearm and I negligently discharged it and killed somebody, I would not be responsible, how does USCCA cover that one?

That’s a lousy straw analogy. Get real.
Instead, let’s say that:

When the gunshot killed that other person, the naive victim of your misguided counsel would would be the culpable party? That’s nonsense.

When the gunshot killed that other person, the naive victim of your misguided counsel would would be the culpable party? That’s nonsense.

With all due respect, that’s also a stretch. In the actual incident, the person who pulled the trigger isn’t a naïve victim, but rather a colleague who wasn’t pushed into doing something, but was working in collaboration, and relying on someone else to load the gun in order to perform the action they intended.

This is why I described above what I think the industry standard should be, that everyone in the chain of custody of the firearm is responsible for its safe condition and operation.