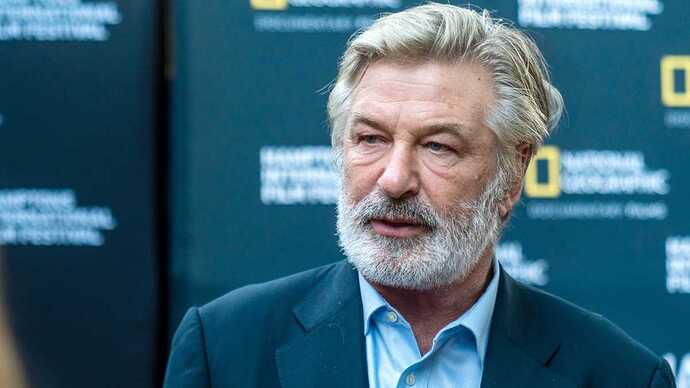 Baldwin's lawsuit centers around the fact that live bullets were loaded into his prop gun without him knowing.

The responsibility belongs in the hand of the person holding the gun. Yes,there is expected protocol in place that should have prevented this. Obviously it didn’t. Alec Baldwin has handled many firearms in his movies, so I’m sure he is aware of firearm safety. This was an unfortunate, tragic, preventable incident.

That is just mind boggling. I hope no film crew will ever work with him again.

I hope New Mexico, throws the book at him. I don’t understand how he hasn’t been arraigned.

Alec Baldwin has handled many firearms in his movies, so I’m sure he is aware of firearm safety.

He knows nothing about firearm safety, sadly he is a leftist POS that bashed guns and people that believe in the 2nd amendment.

So, if he is initiating a civil suit, that means the opposing council gets to depose him also, correct?

He may be exposing himself to more potential criminal liability depending upon what testimony is extracted.

The people around him were not at fault,it is ALL on him,he broke the rule of not checking the weapon in the first place, and every weapon is considered to be loaded until YOU verify that it is clear of rounds

In my business, heavy industrial construction (power plants, mines, refineries), it’s a well know and followed mantra, The guy at the controls has the last word because he IS RESPONSIBLE. We’ve had crane operators dog off for no apparent reason, we’ve had Yellow Equipment guys and gals say Nope. To me it comes down to one simple but important principle “The person that pushes the button is responsible for what happens when the thing does it’s thing”.

I hope New Mexico, throws the book at him. I don’t understand how he hasn’t been arraigned.

Have you seen the color map of NM from the recent election? Birds of a feather… and here, I’m talking dodos.

I cannot, for the life in me, get past the science and the mechanics of a single-action revolver just going off! Coupled with that, the existence of a live round being in the cylinder, him being oblivious to either, or yet would claim no responsibility while being the operator. This causes my skin to crawl, and my brain to ache.

He should have checked the pistol himself.I was taught when someone hands you a gun check to see if it is loaded first thing. It only take a few seconds to check.

The elephant in the room is live rounds being on the set, instead of blanks.

Who purchased those?
Who brought them there?
Who switched them for blanks?
Why???
Was it premeditated murder with a perfect cover-up?

Was it suicide with hopes of framing him?

I get blanks are still dangerous and you still shouldn’t aim at someone. I’m still suspicious there is more to the story.

In the end, That Really Is The Question.

I was taught when someone hands you a gun check to see if it is loaded first thing.

It is unreasonable to expect the safe firearm handling rules to be followed while filming a movie. Movies would look pretty silly if everyone never pointed a realistic looking firearm at their targets and never pulled the trigger. Because of this real firearms should never be allowed on a set unless they are modified to not fire anything more than blanks. And with CGI they don’t even need to take that risk anymore.

The real crime here is that the producers (Alec Baldwin being one of them) allowed real firearms to be used on set in the hands of completely unqualified actors like himself. They compounded that negligent decision by hiring an under qualified armorer and then burdening her with additional duties. They further compounded that by ignoring dangerous firearm mishandling events in the days prior to this completely preventable tragedy and not ordering a stand down to review safety procedures. Seems like criminal negligence to me on many levels.

By suing for negligence the people he was responsible for hiring he is proving his own culpability in this event.

I didn’t think of actors not knowing anything about pistols.

Actors just pretend to know what they are doing

So keeping the muzzle pointing in a safe direction and looking at the rear of the cartridges, could anyone distinguish real rounds from blanks, without ejecting them?

Most actors these days are just that, “actors.”
Watch movies as late as the early 90’s and you’d find movies with stunt doubles but stars could actually ride horses and shoot real guns.

Keanu Reeves is an anomaly.

So keeping the muzzle pointing in a safe direction and looking at the rear of the cartridges, could anyone distinguish real rounds from blanks, without ejecting them?

I have never shot or even seen blanks in person so cannot answer that question. The only dummy rounds I use to practice reloading or dry firing are rubber, plastic or colored aluminum and easily distinguishable from the real thing but I still don’t point my real firearms at people even when I know they are empty or full of snap caps. I believe the apparent difficulty in distinguishing live rounds from dummies or blanks is one of many reasons to make sure that firearms capable of firing live rounds should never be allowed on a set where they will be pointed at other people.

Based on the way actors try to imitate recoil, I don’t expect any of them to know jack about firearms.

Therein lies the problem. Playing kid games in an adult world does not absolve him from being responsible for his part in the action. And then there should have been an RSO, Armorer or a Certified Instructor advising them and on the set. They should not have been pretending with a real firearm without one. So, there is culpability here, IMO. And then, as stated, He had the inherent responsibility to check that firearm when he first received it, which is a sticking point with me. And ignorance is not a suitable excuse under the law. So, I do agree with negligence.