How do you people carry all that stuff?

Its all muscle memory. I dont wear a shoot me vest though lol. As I carry try to look avg as possible. But heading to the range I’m 511 gear and such 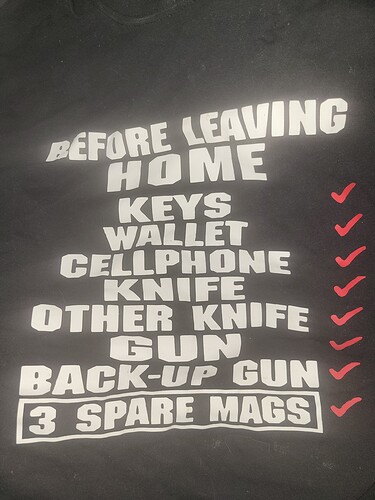 The cousin who gifted me this tee had an item removed, I simply don’t recall which.

Ya gotta know, I used to carry two 5" 1911’s with a total of 50 rds ready to go…in addition to the two knives, a flashlight, etc…which reminds me, a small 511 light with tailswitch is a good EDC item. Bad ppl get very uncomfortable when u take their dark away…but it was a weapon my cousin had removed, not a flashlight…who knows hardware it was!

That pretty much covers it 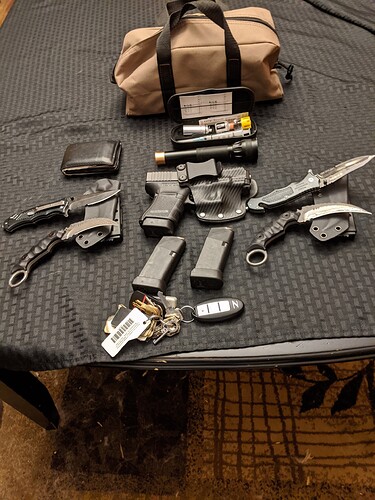 That’s my EDC I put it all on the same way, every day. Every single time. It weighs 16 pounds and I’m just used to it by now.

However, I dress around my EDC. So it isn’t visible.

@Zavier_D that is a lot of stuff brother and I’m sure you can be comfortable with it.

@Zavier_D the big question, why so many keys?

What? No lip balm?

I might consider swapping one or two of the four knives for a non-lethal like pepper spray and/or on-body first aid/IFAK.

Yes but four knives are so much cooler than two or three.

What type of on-body first aid kits or IFAKs do you suggest? I have really like the one from the Warrior Poet Society.

Great question! I have a hard time comfortably-enough concealing very much bulk on me, so the only IFAK-like kit I have managed to actually carry is this: (it’s about the size of a medium wallet, it’s all vacuum packaged and is smaller than the over-bag pictured)

The Pocket DARK Mini Individual First Aid Kit (IFAK) and Trauma Kit is Pocket Sized Trauma Kit Comes With Everything You Need to "Stop the Bleed": Equipped a Tourniquet, Combat Gauze, Gloves, and Duct Tape - backed with our Kit for Life Guarantee!

And that doesn’t have a TCCC approved TQ (or even close, swat-t stretch wrap and tuck style) so it’s not really a bona fide IFAK. Still, IMO, much better than a 3rd or 4th knife or 3rd magazine (to me, I’d rather whatever medical I can fit, as opposed to even a 2nd magazine)

During the summer in lightweight shorts the most I can bring myself to EDC from the IFAK-list is a SOF-T TQ. I mostly have CAT’s but the SOF-T does pack down better for a pocket.

I like to shop medical stuff on dark angel medical, north american rescue, or chinook med

I’m also a big John Lovell fan, am subscriber/member whatever. He has good stuff and great messages.

I firmly believe that even just, say, 1 SOF-T TQ is a better carry choice than a second magazine or second knife. Much more likely to have a use for a TQ than an nth mag/knife/gun, I think, based on all of the stats and data as well as anecdotal I have been able to find

Dark Angel’s MINI is pretty good. I also tried this pocket kit from Live the Creed and its also nice (similar if not exact same components).

Back in the “Do you carry trauma kit?” thread I mentioned I was going to pickup this “EDC Pocket Trauma Kit” from Live The Creed I got this kit a couple weeks ago and have been off/on carrying it around. Overall I like it, but I don’t quite love it. I will continue to incorporate this into my EDC rotation, and I may make some changes (more on that below). But it may also be right up the alley of some other folks, so hopefully this review may help someone else here. There is mostly good about t…

I can only really carry either one in a cargo pocket. For me, they are too fat for rear wallet pockets, and they are barely manageable in front pockets. I’d love a slimmer, maybe wallet-size IFAK. I’ve thought about sewing my own, but my skills there are pretty limited

And that doesn’t have a TCCC approved TQ (or even close, swat-t stretch wrap and tuck style) so it’s not really a bona fide IFAK.

One of the main benefits to the SWAT-T (IMO) is you can use it for a wrap to hold a bandage in place, not just as a tourniquet. Whereas the better TQ are pretty much single purpose. Not saying one option is better than the other, but each has pros/cons.

I was going to try and sound all tough but and . Just in case the gun and all the other knives where I could still use the keys.

Reality: I am lazy.

3 That bag at the top carries my IFAK. A Rat tourniquet, Israeli battle bandage, chest vent, few other odds and sods.

It’s small enough I can keep in back pocket.

How do you carry that bag on you?

Also, what made you pick the rat TQ? I have one, but it gets left in the basket in favor of CAT and SOF-T now…rat just seems too narrow and not as easy to get tight, generally it seems preferred for kanine or possibly peds use because it’s easier to get on a smaller limb but overall…TCCC approved > anything else i

If your first aid is all in your car, you have none. Which is totally your decision, just putting in my $0.02 on carrying 16 lbs of gear and no first aid