Did he cross the line 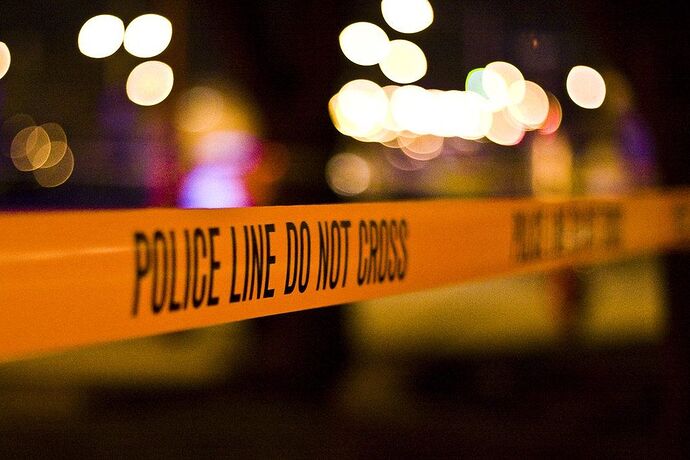 Man who killed armed robber in Houston ready to talk

The armed citizen who put down an armed robber in Houston is now ready to sit down and talk to police, according to his attorney.

Problem No. 1, We’ve only been shown a snippet of the event, and it was grainy at that.
Problem No. 2, We could not have known of an alleged “fake gun.” Who was the person lying on the floor when the perp was flagging the gun (or fake gun)? What was that about? The assumption I held was that he was shot by the perp flagging the gun! So, this is very, very confusing for me.
Problem No. 3, When was the threat truly over? Who judged it? The media footage (which was grainy), we who would be watching it, or those in the room? Courts and jurors have their work cut out for them.
Problem No.4, As for them not charging the defender, I can understand given the snippet shown, but as for a name missing; this has never stopped LE from putting out an APB on an individual or others.

I stick with my original premise, that until something else shakes out, my only question is whether the defender was legally authorized to possess a firearm, as I’m sure there will be more to come.

Shaking my head over the “fake gun” thing though…

Problem No. 3, When was the threat truly over? Who judged it? The media footage (which was grainy), we who would be watching it, or those in the room? Courts and jurors have their work cut out for them.

If you see the complete video, it is clear that after he took the gun away from the miscreant, he came back and shot the kid again in the head.
THAT shot could easily be the basis for charges against him
It might help to listen to John Corriea and Neil Weidner comment on teh event with teh full ficeo at Victim Picks The Perfect Time To Turn the Tables in Houston - YouTube

I’ll watch a clearer image. brb, and thanks for the link.

OKAYYY!!! First of all, @Craig_AR thanks for the link which showed much clearer and length of footage of the incident. Commentary is cool but the footage is most important coupled with what we are trained to know what is proper generically and more specifically according to the applicable laws of our respective states. Second of all, I do thank ASP (my brother John Correia) for posting this to Youtube.

I can clearly see (according to this footage) that the shooting should have stopped when the gun (fake or not) was no longer in the perpetrators’ possession. And that any after shots could be considered overkill or crossing the line. And a court and jury will definitely have to make that determination if the DA pursues it, or public outcry demands it.

I can also see the man under the table was not there because he had been shot, but simply trying to hide or maybe something else was going on, it does appear that he threw some money out on the floor.

But again, as to why the defender may not have stuck around was probably to ensure his best chances of getting access to legal counsel for, perhaps, safety, direction, protection, and representation.

I like that they explained why this might be legal in Texas (the first 4 shots, anyway). That’s a good thing for us to understand. Whether this is legal could vary from state to state.
Know your state and local laws.

Bla, Bla, Bla. Sorry had to change the body slightly.

I don’t understand why he took the perps gun then shot the then unarmed man in the head. I wasn’t there, and I don’t know the whole story, but it doesn’t look too good from what I did see.

If he didn’t breed already, he would be in line for a Darwin Award.

in a confrontation,you really dont know just how you will act or react

I can guarantee you that I will not shoot someone in the head that is laying down and disarmed. in the video, the perp is not moving after he hits the floor. At that point the person acting in defense removes the perps firearm from his reach, and perp doesn’t appear to move. At that point, the threat is eliminated. After this, the person that was acting in defense squeezes another round into the perps head. That last round appears to me to be an execution, not defense. I will not do that. I may be tempted, but temptation is nothing unless acted apon. I refuse to act on that temptation.

temptation is nothing unless acted apon. I refuse to act on that temptation.

When you are in that same situation, we will judge you similarly. When pumped full of adrenaline, you are not “thinking”. I recall talking to an officer after an accident about what was going through my mind in the one or two seconds before I hit the car in front of me. He said if I had that much time, I had time to avoid the accident. the guy was at a stop just past a curve in the road. without a turn signal nor brake lights. A vehicle was approaching in other direction. The edge of the road was a steep ditch. In my mind, the only route was not one a car could navigate, which it did not, but that was the only possibility I saw in my mind. In retrospect, I understand the time distortion of adrenaline. Your reaction time and the thoughts you are experiencing will not match the scenario. Good luck in the future.

When you are in that same situation, we will judge you similarly.

I would expect nothing less IF I am ever in a similar situation. If I ever take a shot in the way the last shot in the video was done, I deserve whatever 12 people think I deserve. I have no problem with his initial action of self defense. I initially didn’t even mention the four shots after he is already on the ground as that could be adrenaline or whatever. My problem is that last shot. To me, that last shot was not a righteous act. Everyone has their opinion, and that’s all it is…all it will ever be.

To me, that last shot was not a righteous act.

I agree, but in the “heat of the moment”, one might do what one logically would not - the point of my prior post.

I wonder if the threat said something to him after he got shot to egg him on to check his pulse?

I hope that in the moment, if it comes, we all fall back on our training and lessons from others, and stay on the righteous side of a conflict.

I have a couple of WTF moments.

In 2015, Washington was convicted of aggravated robbery with a deadly weapon and sentenced to 15 years in prison in connection with the fatal shooting of 62-year-old Hamid Waraich two years prior.

How do these violent felons keep getting out of prison?

because of the weak prosecutors

Those re not weak prosecutors. They are doing these actions quite intentionally. See Chicago, Los Angeles, Baltimore, and others.