Democrats' the party of gun confiscation? 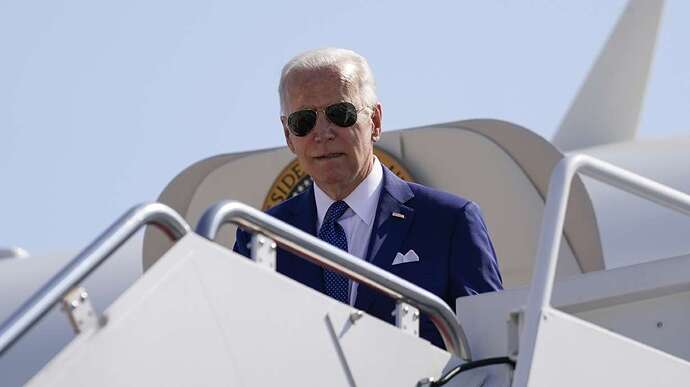 President Joe Biden is forcefully defending the FBI as the agency and its employees have come under criticism and threats of violence since executing a search warrant at Donald Trump's Florida residence earlier this month.

“We’re not stopping here. I’m determined to ban assault weapons in this country! Determined. I did it once before. And I’ll do it again.”

I remember back a year or so, some body jumped on me about calling the democrats’ the party of gun confiscation. I don’t know, looks like Joe wouldn’t mind an AR grab.

The democrats are definitely taking the lead on the confiscation ban wagon but they have gotten plenty of support in words and actions from Republicans over the years.

“We are writing to urge your support for a ban on the domestic manufacture of military-style assault weapons. This is a matter of vital importance to the public safety”

“While we recognize that assault weapon legislation will not stop all assault weapon crime, statistics prove that we can dry up the supply of these guns, making them less accessible to criminals. We urge you to listen to the American public and to the law enforcement community and support a ban on the further manufacture of these weapons,”

From a letter signed by Ronald Reagan in support of the 1994 Assault Weapon ban. Several Republicans said Reagan’s support was what made them vote for the ban.

“I generally oppose gun control, but I support the ban on assault weapons and I support a slightly longer waiting period to purchase a gun,”

Donald Trump from his book - The America We Deserve.

“We’re in the final two or three weeks, and I’ll be able to write out bump stocks.”

Donald Trump when asked about his move to have the ATF ban bump stocks.

Oh, Good, Donald did it. I feel much better now.

They have all been doing it to us for several decades now.

Both were Democrats until they ran for president. Reagan was not a 2A-supporter as Governor of California; he started “gun control” there. We got the FOPA under Reagan, not stating that was good, either. However the worst “gun control” laws were passed under Democratic presidents, the NFA, FFA, GCA and the AWB (FDR, LBJ, WJC).

They shall not infringe on the 2nd Amendment!!! We all know sadly to say, the 2nd amendment must have an asterisk next to it in miniscule print that only the Hubble telescope can read. It has to say that politicians decide coercion seems to be a better phrasing. I know I cant afford to take a court case to the supreme court to help me keep my weapons of choice. We are still not able to own military weapons which we should since the military shouldnt have more powerr than the malitia.

There is very clearly a substantial, predictable, consistent pattern when it comes to gun control.

choice. We are still not able to own military weapons

We are still “allowed” to own military weaponry - with the right licenses, etc. Most weapon systems are manufactured by corporations, so with enough money and government approval, you could do that, too.

Is it just for Jews this time or will any old Conservative do?

We are still “allowed” to own military weaponry

I know a farmer with a whole collection of tanks.
I wish he’d sell me one for my morning commute.

Interesting Joe Biden the leader of the confiscation party says that the Right (American Citizens) needs weapons bigger than guns, all while telling us he is going to confiscate our AR-14s, you cannot make this stuff up, we get closer to being a Banana Republic everyday.

Yeah, there’s a lot of irony in his contradictory arguments.
Then again, the anti-2A crowd isn’t known for their rational arguments.

Remember Beto in Ohio arguing that the Kent State massacre was an illustration of why civilians shouldn’t be armed?

Can you explain that? As a person that believes he is living in reality, though lately the reality is beginning to appear surreal, I do not suffer any emotional trauma. Neither do I get emotional over someone else’s irrational thoughts and behaviors.

As I have explained, I have witnessed firsthand the psychoses of those that are anti-rights. As I explained, I did not even react, my emotions were in full-check. I am a man, it takes quite a bit to get a reaction from me. Life is too short to worry about emotionally-crippled people that are unwilling to live in the real world. I can’t help them and it’s not my job.

I am more than willing to help those trying to learn, understand and better themselves. The rest I have no use for. May they see God - the sooner the better, but that’s not my job, either.

I admire your thinking. As long as I am not emotionally crippled I want to help those that are. Not that I think God needs my help. It just helps me feel at peace.

If you take all the guns away you can control the country.

Article VI of the Constitution requires all members of the Executive, Legislative and Judicial branches of government both federal and state are required to swear an oath to defend the Constitution. I doubt there is a Democrat that has not violated that oath. Every member of the FBI and other police organizations has sworn that oath. “There is no honor among thieves.”

required to swear an oath to defend the Constitution

Instead they choose to attack the Constitution of The United States:

“A well regulated Militia, being necessary to the security of a free State, the right of the people to keep and bear Arms, shall not be infringed.”

“I said that there was still work to be done to keep our communities safe and keep dangerous firearms out of dangerous hands. … Today, House Democrats acted by unifying to pass an assault weapons ban to keep weapons of war off our streets, save lives in this country, and reduce crime in our communities.”

During the 1956 Hungarian Revolution, elements of the insurgents tracked down and killed both known and suspected ÁVH officers and informants.
The FBI is fast becoming the AVI, KGB, Stassi or other similar secret police organizations.