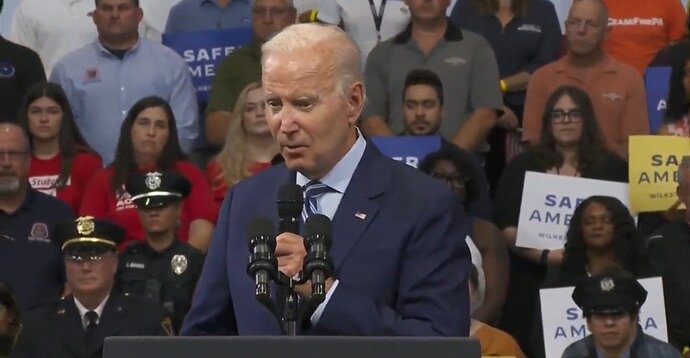 Joe Biden on Tuesday traveled to Wilkes-Barre, Pennsylvania to promote his ‘Safer America Plan’ to ‘reduce gun crime.’ Biden delivered remarks at the Marts Center at Wilkes University after hiding out for several days. At one point Joe Biden went...

I think A-10’s would give him a greater tactical advantage.

I’m sure our left thinking friends will have something clever to say about it.

“For those brave right-wing Americans… if you want to fight against the country, you need an F-15. You need something little more than a gun,” said Biden.

He seems to be forgetting our not so stellar record over the last several decades against countries like Vietnam and Afghanistan who’s people were able to fight us off with little more than some rifles and other improvised weapons.

Or maybe all the kleptocrats in DC are painfully aware of the limits of their power now that their Ponzi scheme is nearing the end? They are forgetting one important thing about a Democracy. You don’t need arms to get rid of the despots and kleptocrats. Just enough voters to throw them out of office and enough jurors to throw them in jail.

He seems to be forgetting a lot these days.

I know, right? And yet, here we are. I cannot “unsee or unhear” a “President of the United States” threatening it’s citizens.

Fighting against whose country, his?
Sounds North Korean to me.
So he can threaten the American people all he wants but if you say one bad thing about him you’re labeled a domestic terriorist?
“Cornpop was a bad dude”

Well we all know that doesnt always work. A certain recent president was leading 5 states just before or at midnight…morning comes around and he loses all 5 states!!! Things that make you go hmmmmmm​:thinking:

Some of us stayed up and watched it happen.

I did as well…was mad as hell when I went ro work the next day.

I got laid off the following day, and decided to retire a bit early. Saved a bunch during the Trump years and have no regrets about my decision.
Fwiw, my shift ended at 3 a.m. and I had Trump with a minimum 294 electoral votes at that time during the election. Realistically it looked like he’d have 307. 4 hours later I woke up and found the impossible had happened.

Save it, print it, frame it.

The next time someone tells you that you don’t need an AR-15, point to it and tell them they’re right. According to Joe, you need something a lot bigger.

Was more than 5 states, it happened in Virginia, too.

Couldn’t believe I was witnessing a coup of my own country on TV.

Baiting, so that Marshal law can be enacted, so the elections get shut down. They may be nuts, but they are unquestionably very systematic. (Systematic like a swarm of locusts)

I wonder if people felt this way in 1861? I wonder if such notions of a civil war were unthinkable then? Granted, the conditions and situation were very different.

As I read about his statements last night, I am astounded at the recklessness and hubris he displayed. Many on the left are calling for war too.

Just what exactly is he trying to do? Is this a pretext to declare some sort of emergency proclamation and/or marshall law before the midterms or 2024?

What is he trying to do here? Does he even know what he is doing? Such talk should greatly alarm citizens who know anything about history. All of this has happened before.

Unfortunately, each time an inch is given, a mile is taken.

We’re seeing it play out in real time now.

Interesting a President who is holding a Live Nationally Televised Political Commercial Thursday Night to talk about " Protecting Democracy", just a couple of days earlier threatens American Citizens, the Wee fellow and the Dem party have a sickness and its not COVID!

We have got to realize, Joe Biden along with other Presidents don’t seem to hesitate to issue executive orders for damn near anything. After the Supreme Court Ruling I’m guessing that will be his next move in regards to the evil AR “Assault Rifle”.