Why kids shot up schools

A young girl killed herself because of online bullying by another girl.

Another reason I believe social media apps are a bad idea, people can pretty much say what ever they want online, hiding behind a keyboard and do not think twice about the implications.

You may enjoy the newest Jordan Peterson video! WOW. What a tongue lashing.

Wonderful, isn’t he? Love the man’s logic and clarity.

A fair proportion of mass killers have been folks who were known to mental health professionals and being treated by them, including prescription of psychotropic drugs. One of the problems, in my opinion, is that those individuals were never reported to the NICS as prohibited persons. Examples include: (1) Parkland FL shooter, handled more than 30 times by LE and long time client of mental health professionals; (2) Virginia Tech shooter actually adjudicated as a danger to himself and others, but none of those officials who handled him bothered to report him to the NICS; (3) Aurora CO theater shooter who thought he was the Joker and dyed his hair orange was being treated by the head of the psych department at the University of Colorado – nothing to see here; (4) Southerland Springs church shooter involuntarily committed, dishonorably discharged from the Navy, actually escaped from a mental hospital, but no report to the NICS; (5) Las Vegas Mandalay Bay shooter prescribed drugs by his doc for anxiety issues but no report to the NICS, no follow up;

I’m sure there are more. Yet, when folks like this go on a shooting spree, the public demand is to make folks like me a criminal by outlawing the types of firearms I might possess, outlawing magazines with capacity greater than 15 (my state, CO), demands for universal background checks, but no demands for holding mental health professional liable.

folks who were known to mental health professionals and being treated by them, including prescription of psychotropic drugs

I’m not sure the mere existence of psychotropic drugs should necessarily be disqualifying. I believe it was within the last ten years, the FAA allows pilots of all stripes to take one of four different SSRI medications for anxiety and depression. The side-effects of these four meds are very minimal.

Nor am I sure that a psychological condition should necessarily disqualifying. OCD? Anxiety? Panic Disorder? These are the common-cold of mental illnesses (and I’d bet money that a fair number of people on this website who carry experience one or more of these mental health conditions.)

What about people who hear voices? The vast majority of these folks never hurt anyone.

How about borderline personality disorder, or bipolar? How severe does someone’s symptoms have to be in order to be disqualifying.

Two conditions I might agree should never be allowed anywhere near a weapon, and that would be people with antisocial personality disorder or narcissistic personality disorder. The former is devoid of a conscience. The latter is pathologically controlling.

30 visits with LE AND mental health issues. Yes, probably. Adujicated a danger to self and others, Yes, probably. Orange hair guy - what was he being treated for? Does orange hair make someone a danger?

People who are actually a danger to self and/or others should be reported to NICS. But not every single person with mental health struggles is a danger.

He was Live posting video on Facebook while on his shooting spree today, 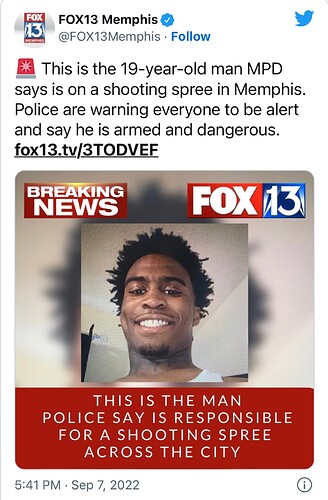 If he didn’t have the ability to live-stream his shooting spree would he have still done it?

Impossible to answer for sure. But since he was live streaming it is very likely that attention was a prime motivating factor. He would have had a lot less attention without the online platform to share his sick endeavors.

I think the main problem with the internet is that it allows and encourages us to seek out and then only hang out with strangers who’s opinions closely align with our own. It is way too easy for people to unquestioningly validate their own beliefs in an echo chamber without thought or care to those outside their self created bubble who may disagree with their opinions. This can lead to actions well outside societal norms that get internally normalized while being cheered on, or egged on, by their online “friends”. It also allows for much easier manipulation by people with nefarious agendas since it is much easier to create a false persona online than it is in person.

When we could only hang out with our family, neighbors, classmates and coworkers we had little choice but to deal with, consider and adapt to opinions and points of view that differed from our own.

The Columbine shooters were bullied and harassed for years; technology has made it possible for that to continue 24/7/365.

It might be a bit before your time, but smart phones really started to be around in 1999 and where in widespread use by the time of the Sandy hook shooting. That being said no motive has been determined for the Columbine or Sandy Hook shootings however, some have suggested the Columbine shooting could have been bullying. The shooter in the Sandy Hook shootings had a history of mental illness and according to some reports had learned that his mother planned on having him committed which may have been a factor. Also, it is doubtful that any form of cyberbullying was involved as even though the internet was well established by then it did not have much of a social media aspect. It did offer group chats, but the look, and feel of these was completely different. Even though these things did not come into play with these earlier shootings, the stage has changed and today many new pressures are put on people of all ages, many caused by social media. Social media also makes it easy to become internet famous giving another reason to preform horrific acts.

What about people who hear voices?

I went to a clinic once and the young PA asked me out of the blue if I hear voices. I could have ignored her but I chose to answer yes. She gave me a dirty look and I said “ oh you mean when there is no one there”. She kind of threatened to have me committed under her breath.

Yes, this is thought revealing for those that do not take the time to listen to their kids. Life isn’t perfect but this is a good step forward. Give kids other outlets so they can feel wanted and understood. Parents tutor your kids values and common things and they will never forget that. I know I have not forgotten teachings from my parents but from others as well. These cell apparatuses are wreaking havoc with the new generation. There is an assault on our kids minds as well as their spirit and that is not a good thing. The way forward is to really pay attention and give insight into their lives regardless of circumstances. The above statement posted above says it all.

Who knows if this is another one on drugs legal or illegal or another false flag. Anything now is up for grabs, no? No conspiracies here just going on some logical thoughts or ideas that can be of some value. The FEDS Cannot be trusted on anything they put out in the media as well as the media itself. What a world.

I think if we focus on the beauty in the world it will put us in a better position to know what and how to fix the thing that need to be fixed.

I believe the kid has a point! Many of you zeroed in on smartphone, but the real point was KIDS desiring attention that they are not getting from their environment (i.e., home, friends, other adults). A phone does not take the place of personal face to face contact where emotions can really be seen though body language observation. And NO a face video is not a good substitute. Please give your kid a hug for me for being so truthful and insightful in giving his opinion, as he is on the ground floor of it all. Whereas, if you are aren’t a teacher or attentive parent good social skills, who makes it a point to talk true listen versus talk-over kids you’d miss it a mile away.

Who cares about smart phones and when they came into pandemic use by kids! I’s all about giving kids proper attention and finding out what makes them feel good and sad. Create projects for kids where they can both excel and flounder a little. Be there to help them through the effort and merit them accordingly.

And it isn’t just kids starving for attention/affection. We’ve created this monster with no way to undo or alter it.

I hope there’s a way to undo or alter it.