The image of gun owners

Back in the 1970s, Honda forever altered the image of the American motorcyclist. They did it in their ads with the tagline “You meet the nicest people on a Honda.” That ad campaign, plus the introduction of the Honda CB-750 and, subsequently, the Honda Goldwing, took motorcycling out of the bad boy culture and into the suburban mainstream. It’s never turned back.

In the gun-owning, pro-2A world, we would do well to consider ways to project an image of the nice person next store who you would trust to take care of your kids, your dog, water your plants, take you to the airport and, oh by the way, they are responsibly-armed citizens.

When I flip through the pages of Concealed Carry, I see some variety, and that’s good. Let’s make it better. I also see plenty of guys in their 30’s and 40’s, looking well-armed and kinda scary, and I’m not sure how that helps project a positive gun-owner image.

A number of years ago, the NRA had their “I am the NRA”, showing common people as gun owners. I think that was right on. We need more of that.

I’ll leave you with some pictures of gun owners, the type of images I think we need to make more commonplace in the discussion about guns in this country. We need to remove the “scary thing, scary thing!” factor, and help people think “useful tool in the hands of a normal person.”

That’s how we continue to win the war for good guys and good gals with guns. 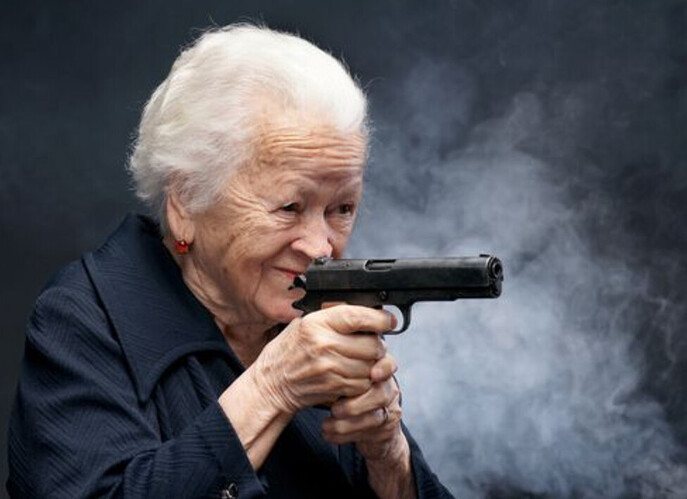 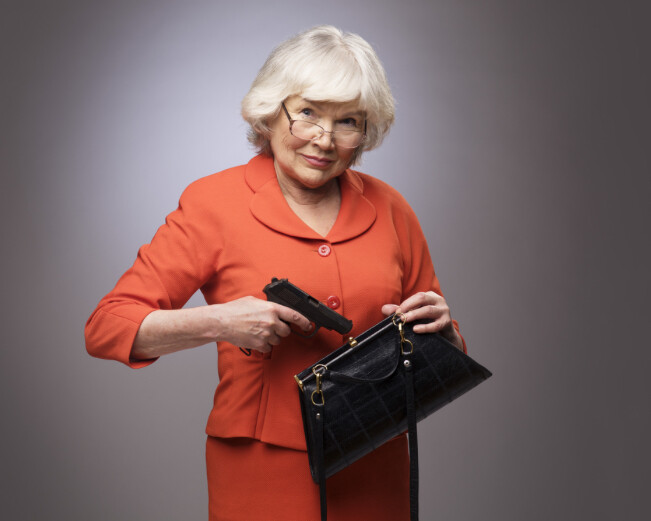 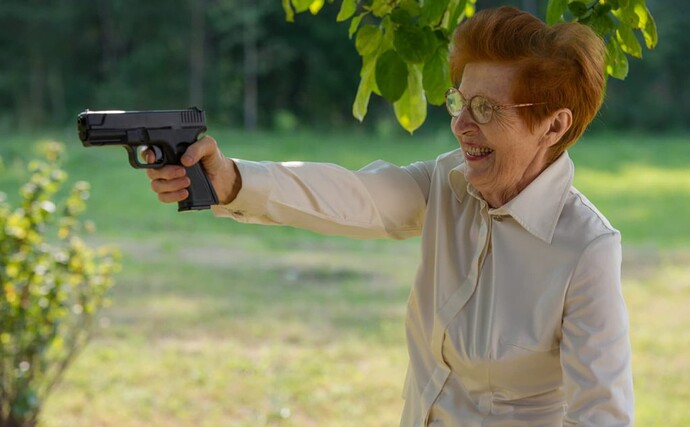 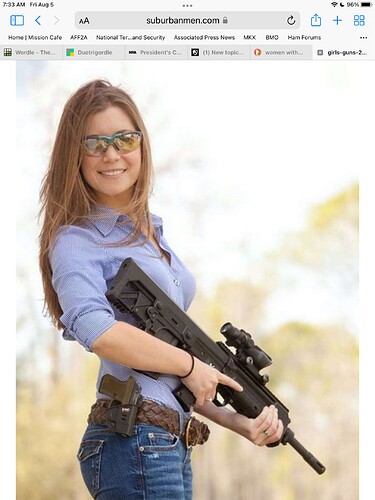 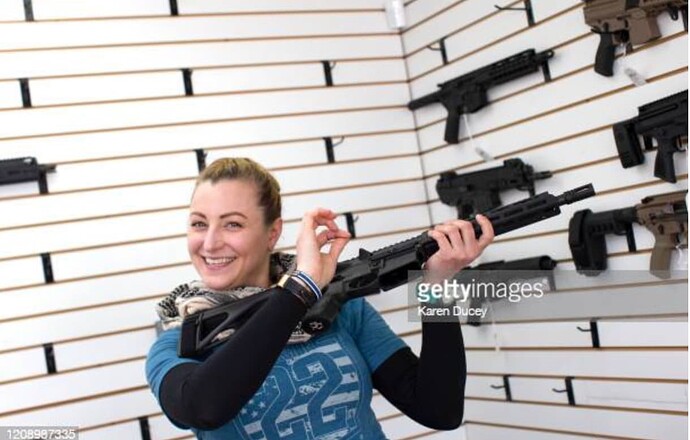 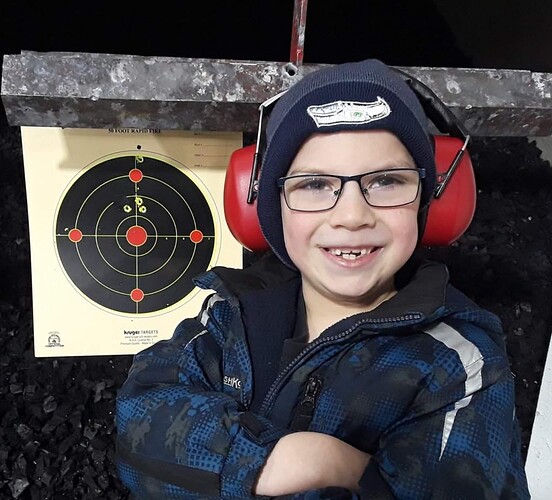 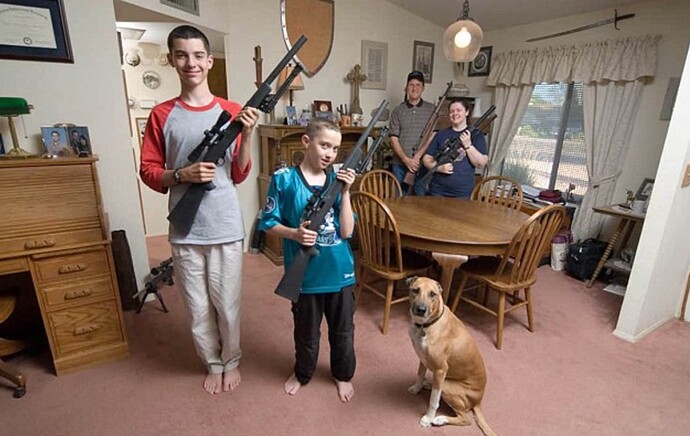 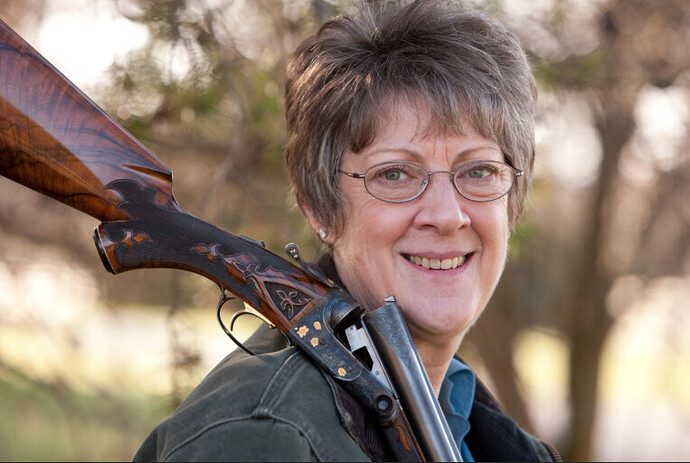 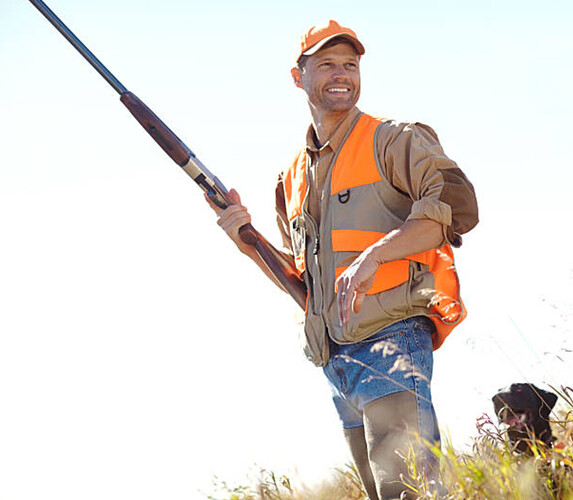 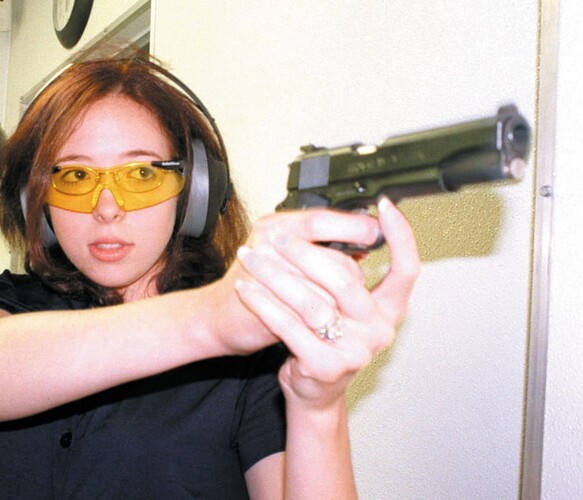 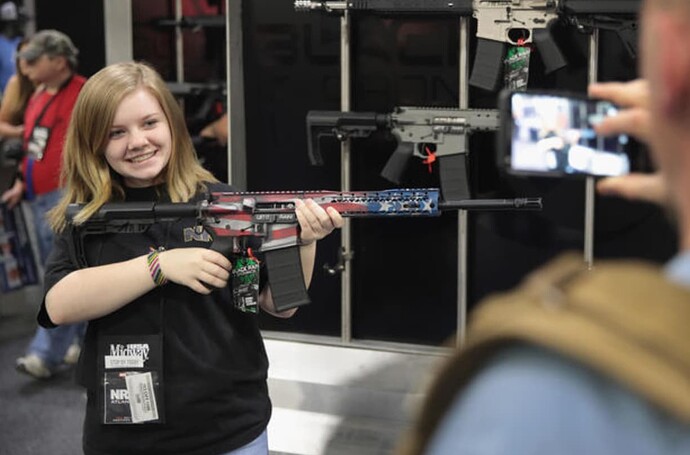 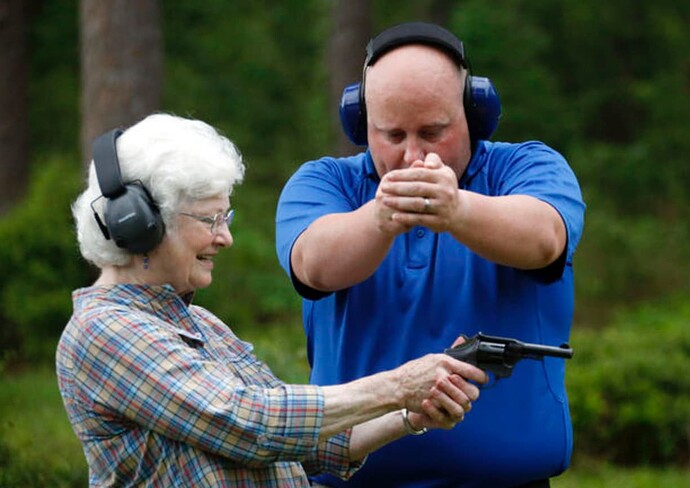 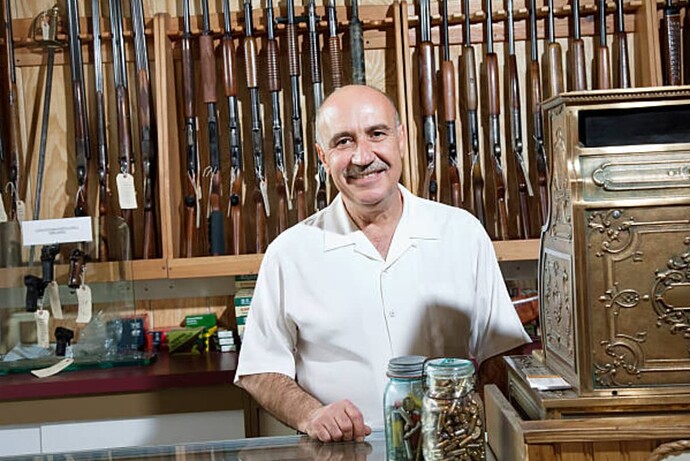 Interesting take. Perhaps that’s why the big news companies insist on making celebrities out of mass murderers. It perpetuates the worst negative images.

I would campaign on images that show people coming to gun ownership via different paths: competition sport, self-defense, food security. You have to show a variety of arms, and a variety of people, including “toxic musculinity” to appeal to widest possible audience and all lifestyles, and to destroy the myth of “assault rifle” and large capacity magazine. You have to emphasize education, safety and wholesome aspects of gun ownership. I would not hesitate using images from GTA or similarly inappropriate games, and Tarantino movies to depict threat and criminal danger everyday people face unarmed.

In traffic today, there was a person on a bullet bike wearing a suit and tie and fancy shoes. The wind had blown his suit coat up over his firearm. I pointed it out to R and she said “you notice that stuff more than me” I replied “It’s always nice to know where friends are.”. My point, we would do well to get the word out there that anyone could be a responsible gun owner.

Gramma #1 gonna knock her false teeth out from the recoil.
Gramma #2 sure has a nice trigger finger position ON THE TRIGGER! She gonna shoot a hole in her purse.
Gramma #3 has a low grip, almost half inch between web and beavertail. She gonna get bonked on the head when the recoil flips the gun up and over as her elbow bends.
Young girl in yellow shooting glasses has a SCARY grip (from watching movies?).

How about using only photos that show safe and proper gun handling based on reasonable training?

My favorite (yes, that’s my daughter) 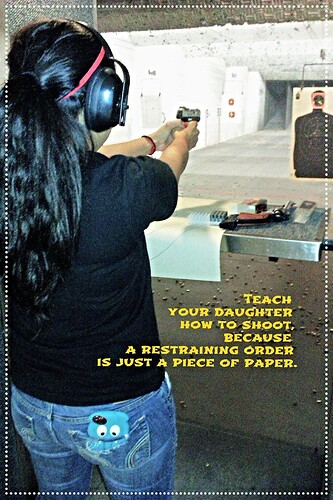 I think you’re on the right track here, it has after all, been largely a war of imagery designed and crafted by anti-gun ownership people and pushed by an eager monopoly of media. They will make it tough to get out any counter imagery that looks even a little on target, (pun acknowledged). So, the truths can’t be left out either, it is the truth as a whole that is most on our side. Emphasis on " as a whole", because selected parts in isolation can say anything you want them too.

Quoting a childhood hero, “I resemble that remark!”

We should also include this one. 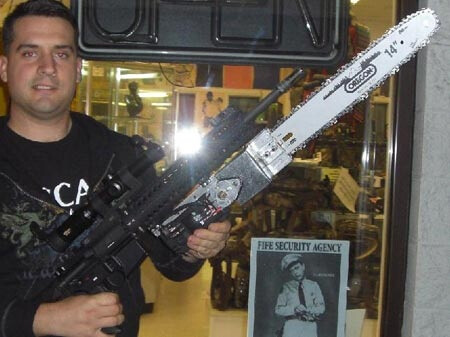 Finger off the trigger, looks like safety is on, no reason to believe direction is unsafe, PASS!

There are actors, directors, screen writers who are sympathetic to Constitutional and 2A issues. Financing could come in part from NRA and gun manufacturers, in part from crowdfunding. I am thinking series similar to Law and Order, reenacting real events, showing ordinary gun owners save lives. Call it Law Abiding Citizens (nothing to do with the vigilante movie, that one has horrific violent images, and shows desperation and broken justice system - I want to see the opposite)

How about clips from Active Self Protection, no actors needed. 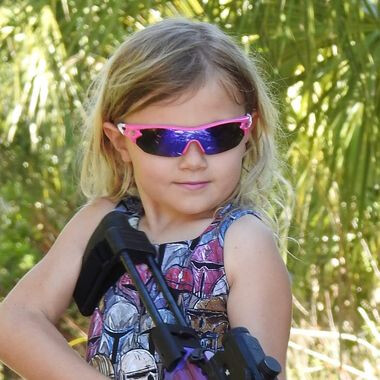 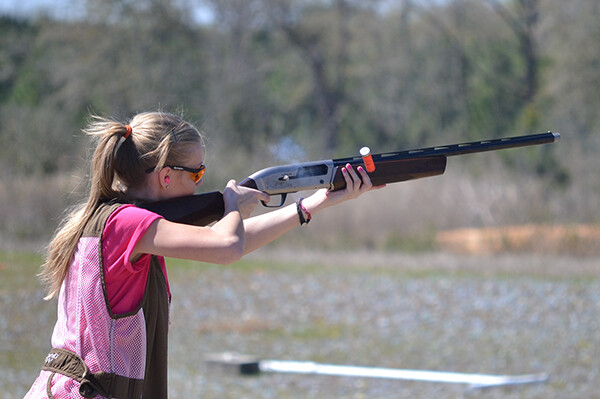 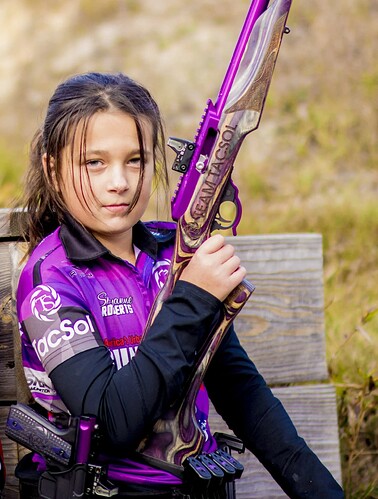 Ohmygosh, that first one is absolutely adorable!!!

Unfortunately, I can pretty well guarantee who the audience would be and that the phrase “preaching to the choir” would apply.

You can see her here. 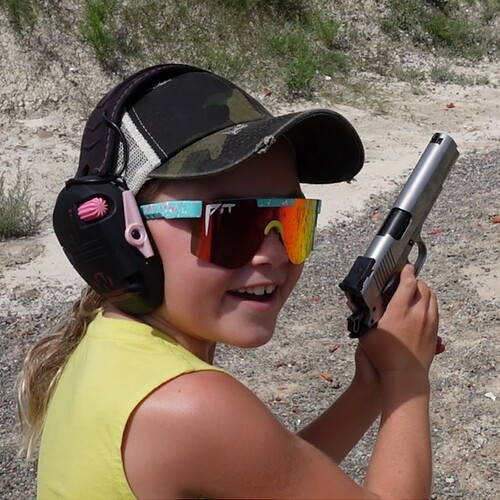 that first one is absolutely adorable!!!

Oh wow, she is hilarious. Yup, we need more like her, a very positive image!