Stay calm and Make Sure - Weapons in public

This weekend there’s an event called FANX going on here in Salt Lake City. It one of those deals where people dress up like super heroes and movie characters and run around trying to act the part. It’s a big deal, must be 100,000 people in town for this.
Today, I walked over to where R works, in a mall. Many of the FANX fans are walking around the mall, in costume. There were swords, guns, knives, clubs, laser guns, light sabers… A couple in particular caught my eye, one kid had a shot gun that looked real, the red tip was only inside of the bore not visible on the outside, another guy was swinging a regular pirates sword around, in public, like he was fighting. Sure would be easy to mistake some of this stuff for real threats. Just reminded me to asses the threat and be 100% sure before taking action.

Thanks for sharing @Mike164. I agree 100%! I grew up in the 80’s-90’s and I had a few toy guns they looked real. The kids nowadays will take these in public streets, parks, etc. The police get reports of a kid with a gun, and the police have to be very observant that it is in fact a toy, and based on how the person/juvenile is acting, may have to make a split second decision. We all knows what happens after that…

Just Google “child with toy gun killed,” and you’ll get lots of results like this example:

A teen boy armed with a fake AR-15 rifle was fatally shot by a man who had a real gun in Texas early Friday, according to a local report. The boy was shot around 2 a.m. on Uvalde Road in Houston, C… 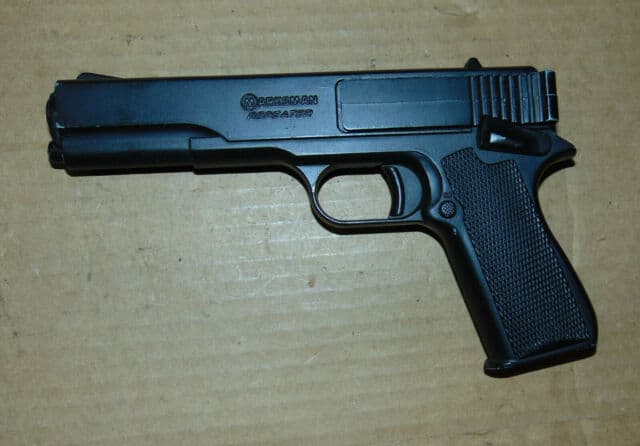 I grew up carrying this baby all around town…nobody came unglued, nobody called the police, wasn’t shot by a police man, did no damage to other’s property. Those were the good ole days.

The post above mentioned Houston. If teens approach you nowadays in Houston with what appears like guns, at 2am, you have a problem…
I am against toys that look like real guns and against guns that are made look like Nerf toys.

And by the time you are 100% sure you may/will be dead. If it looks like a gun and it’s pointed at me or mine I will react with deadly force. Period.

In Utah and I think most other places the standard is “What would a reasonable person have done?”. The police aren’t waiting around to see if it’s real, I don’t think regular civilians would be held to any different standard of “reasonable”.