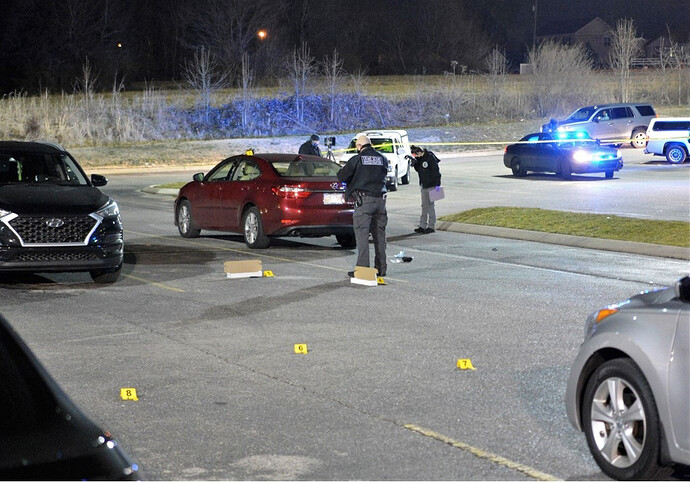 An attempted prank robbery in the parking lot of an indoor trampoline park went terribly wrong this weekend, leaving the prankster dead and the man who fired his weapon likely covered by self-defen…

Just saying… Its good to reside in Tennessee.

Stand your ground state… absolutely hate to think of having to use any form of force but glad I reside in Tennessee … got a fighting chance of political based prosecution.

Stupid games and all.

Seriously? A prank robbery? Someone should have been there to tell the kids how their prank could end. Sad that no one was.

Reminds me of a prank video a few years ago, some idiots staged some sort of murder scene in a park with bodies on the ground and the killer was in a clown suit. They got several people scared and yelling and running on video, but one of them pulled out a firearm and they halted all the shenanigans with the quickness. They raised their hands and got down and the camera people came out from hiding. IIRC it was a tense few moments but no one got shot.

I always raise an eyebrow when reading these articles and they keep mentioning “Stand Your Ground” as if it has anything to do with the situation. Was the group expected to run away from the knife wielders?

Yes, run away if at all possible. Even in a state with Stand Your Ground, the best thing to do is run away if you can. Probably the only option for many since only the guy with the gun can best the knife wielders in a straight up fight.

One might argue that the guy with the gun was trying to save others. Probably, that’s justifiable. For my part, I am unable to run so I would have to hide or fight. Seems like I was already seen so hiding probably won’t work.

Yes sir Harvey, in most if not all states… one must “run” or do whatever possible to get away from the situation… even in your own home!! The in your own home part is one that gets my blood pressure up a tad. I’m curious… anyone from USCCA ( officials) care to take a stance on this article? As a member I see that this is a HUGE promo point for them and training in this situation is there selling point.

In this case it is clear the pranksters were brandishing weapons and threatening to assault a group of innocent people. No reasonable person would assume they were joking. I think the vast majority of idiots on this planet are smart enough to not threaten a group of strangers with weapons as a joke. Stand your ground should not have any impact here. Even in all the states I know of without stand your ground laws, the person who fired his weapon would not have had a duty to retreat because he was defending the other innocent people in his group from the imminent threat of death or severe bodily harm.

Kwai Chang, the Shaolin, asked the Master of Monks what is the best way to respond to the use of force. The Master replied that the preferred response is to run away.

When alone, running away would be my first option if available. But when with people I care about I am not likely to run till they are all safely away. Especially if I am in a position to protect them. Since a significant number of people freeze when presented with a threat, it is likely the people he was with were not mentally willing or physically able to escape the threat.

Does that qualify for a Darwinian Award? Asking for a friend.

I think most my friends would say yes.

He’s got his five minutes of fame, posthumously.

Does that qualify for a Darwinian Award? Asking for a friend.

Well, Gorilla Girl has a leg up on the competition, albeit in the Non-Dead Category.

May not have been a prank.

It reminds me of cops and robbers, or cowboys and indians when we were young. We’d all be shot dead today. Not a great outcome…

From that story is this sentence, “Gun permits are not public record in Tennessee, but police confirmed Wilks was shot more than once.” I cannot make the logic leap from the first phrase to the second. Additionally, if someone were threatening deadly force, we are trained to stop/neutralize the threat, which would likely require more than one round.

There was nothing in that story to explain how the incident was “fake”. It’s not like crimes are never filmed, so the presence of a camera does not convince me that it was not real. I would assume, like any other criminal would, he/she to claim he/she did not really mean it. I had that experience once, too. The perp claimed to just want to ask for money. The perp was unharmed and decided to just find an easier victim.

“Gun permits are not public record in Tennessee, but police confirmed Wilks was shot more than once.” I cannot make the logic leap from the first phrase to the second.

The reporter wants to say something, badly, and it still won’t come out.

This prankster subjected a good, caring man to a lifetime of guilt. He is not just an idiot who barrels down the Niagara Falls, his irresponsible actions made a victim.

How do you nominate?

Gun permits are not public record in Tennessee, but police confirmed Wilks was shot more than once

When people make non-intelligible comments like this is “do you take the trolley or do you buy your lunch?”

The point was… self defense laws. Ya’ll can have have opinions and even jest a little about the article but you can find yourself in a bad situation in the blink of an eye. We are to the point in this world where we live more in fear of “what if I make the wrong decision” than actually fear for the bad guy. When you are faced with defending your family in a life threating situation… do you really want to have to hesitate and analyze the “laws” and decide its not worth it to stand your ground? I don’t.