I got to thinking from a couple of other posts that showed target results that it would be sort of cool to see the results from some of our training and do a little “humble bragging.” So with guidance from Dawn I’ve started this thread.

To be clear, we all hope to never have to use these skills, but we should take pride in the training that we do in order to be a proficient as possible should a threat arise and we find need to use them. This is not about scoring “kill shots” but rather proficiency/accuracy (deer, elk, etc target kill shots being the exception)

I was working on these drills as standard training for the average threat type I think I would most likely encounter.

I have work to do (notice the 10 rounds outside of the box) normally my second shot going astray (I’m still working on aiming with both eyes open).

However all of the times for drill #1 were under 2.25 seconds from conceal (and even the misses with the exception of one were very near center mass) and I’m pretty happy about that. 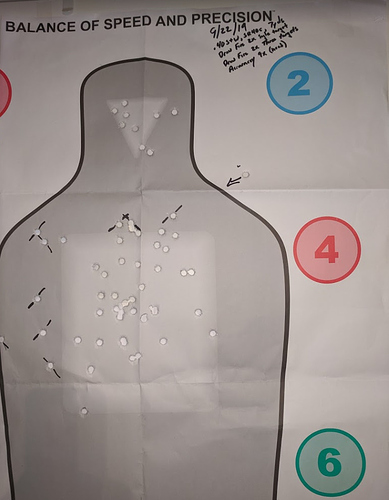 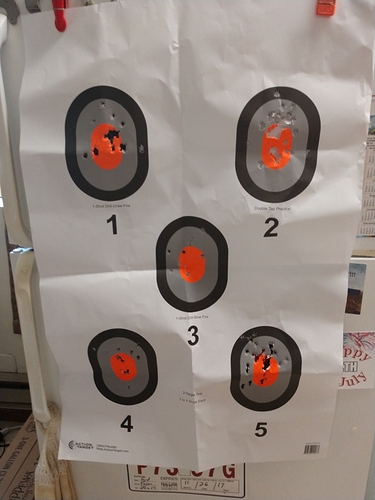 Personally I’d say it’s a bad idea to post your targets here or anywhere online as they could come back to haunt you if you’re ever involved in a self defense shooting.

If you show great skill someone will always use them to point out that “you could have just shot to wound you didn’t have to kill them”.

If you show poor or average skill it can be argued you lacked the skill to use a gun in self defense and thus were negligent and/or reckless.

Yeah, I thought about that…….Dave Young and his instructors talked a little about having “evidence” that from an average person’s perspective you’ve taken every reasonable precaution which includes training and proof of training.

So we have training logs where we document our range days and what we trained on that day, I save my used targets in the shipping box they came (probably have about a year’s worth).

A proficiency argument can always be made (and probably will be), but again as most of us here are not active LEO there is no “professional standard” for us to adhere to. So I don’t shoot well enough to pass the local Sheriff’s certification? That’s fine, I’m not a deputy I’m a civilian and as a civilian am not be expected to meet that standard to carry.

When chatting with Dawn, we were actually more concerned about inappropriate comments that might show up on the thread that might not reflect well on them at a later date.

It’s like a trap we have to live in. But @WildRose made a point… less info about you more chances you win the case .

So that is my response:

(post withdrawn by author, will be automatically deleted in 48 hours unless flagged) 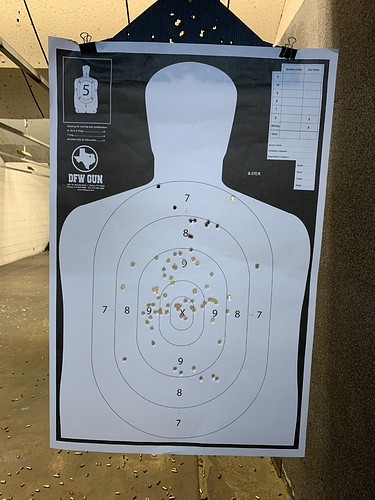 It’s like a trap we have to live in.

yep. I think that about sums it up.

So… damned if I do, damned if I don’t… Well, I’m just going to make my decision on other criteria because there’s no winner in that set.

Since I am not in full-hermit mode, and I am on this forum, and I am in the business of teaching… I’ll just be on this forum and teach. That doesn’t just mean teach others to shoot better, or to think better. It might mean modeling what I think is responsible behavior. Like training. A Lot. And tracking what I do. And asking for assistance with improvement when I need it. And talking about what I did to improve that worked.

Great explanation of the topic, @JamesR!

Were your flyer shots the first or last of the shots from the draw? That may give you a hint as to why they’re flyers. (Love the target by the way

Awesome looking target, @RocketPak! Do you regularly shooting more with your non-dominant hand?

@WildRose, looking for feedback on targets show that you are trying to improve. Even our absolute best targets can have room for improvement. Our targets show we’re training - in a safe and static environment. We know that a dynamic critical incident will change how we shoot a bit because of hyper-focus, adrenaline, and a dynamic environment.

Not posting anything could be used to say you’re not even training for responsible self-defense. A good self-defense attorney will be able to debunk any illogical argument about targets.

@KentR, welcome to the Community! I’m guessing you’re using an outdoor range if you can shoot from the kneeling position? Are you getting into that position dynamically or more precisely before you shoot?

@Dawn, this time was an outdoor range. In my area, we have indoor tactical ranges too. IDPA uses these ranges too.

I’d love to have an indoor tactical range, @KentR, those are hard to find!

@Dawn here is one of our local indoor tactical ranges: 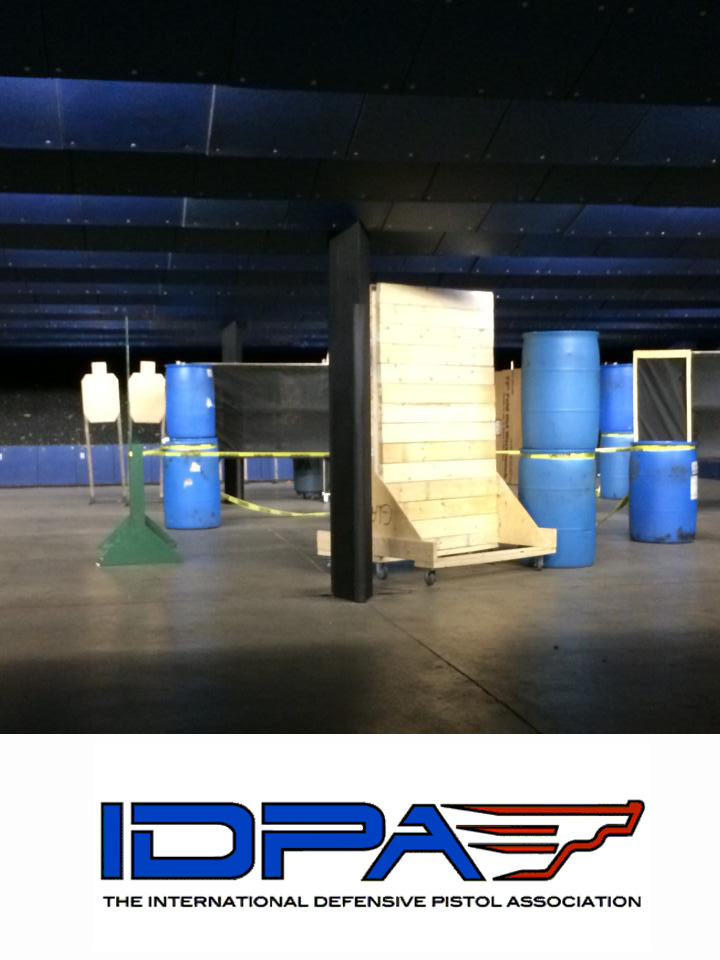 If you demonstrate an expert level of competency there’s an argument to be made that you had options other than a center of mass or head shot available and thus your clear intent was to kill.

If you demonstrate a miserable level of competency or none at all you open yourself up to all sorts of charges based on negligence and that you shouldn’t have been allowed to carry to begin with.

If you demonstrate an expert level of competency there’s an argument to be made that you had options other than a center of mass or head shot available and thus your clear intent was to kill.

I’m going to play Devil’s Advocate here just for the sake of the discussion.

Why doesn’t that standard apply to police officers?

First because annual or biannual qualification is a requirement of their jobs.

2nd because cops are held to a different standard than the rest of us.

That’s pretty much my point. They have to qualify periodically to demonstrate their proficiency, yet they aren’t expected to “shoot to wound”. They are going to target center mass every time.

Actually that’s frequently brought up particularly in civil suits against the officers.

The difference is that we are held fully responsible both civilly and criminally and to a different standard than are police.

Were your flyer shots the first or last of the shots from the draw? That may give you a hint as to why they’re flyers. (Love the target by the way

My “flyers” tend to be my second shot where I’m not managing my recoil and trigger control smoothly as I should/could…e.g. jerking the trigger and/or not having a “good grip.”

Lol, I figured you like the target…and the nightstand safe…what can I say I’m a brand loyalist.

posting them is not the norm and can certainly complicate your situation if you ever are in a defensive shooting incident.

Not the norm for whom? There’s actually an online group/club/app that posts weekly monthly challenges and they have to post their targets (special targets with different scoring sections) weekly and monthly (depending on how many contests you enter) and you can win prizes (normally cleaning supplies and additional targets). Group makes their money from selling targets that are posted online. So it’s quite normal for that group. Might be normal for other sub groups as well. Could become a norm for this group.

Who’s to say what’s normal? I’m sure a prosecutor might argue that owning more than three (or any arbitrary number) handguns, several rifles, a couple shotguns and several thousand rounds of ammunition is not normal either. In which case, based on various posts, I’m guessing about 70% of this community would be hosed.

Not trying to change your mind. I hear you and think you do have a point. However, in my layman’s opinion, it’s a small risk and an area that will be probed anyway (but that’s just me). I pray I (or anyone else in this community) never have to find out.

Normal is easily defined just pick your dictionary and look it up.

It is not the norm for most gun owners or shooters to post their targets online.

You’re free to do what you want but it absolutely can complicate your case if you’re ever in a defensive shooting.