Sobering reminder that our law enforcement officers live their lives with a giant target on their backs.

Also that there are deadly threats besides firearms. I recall an old police officer telling me that his car keys (not his sidearm) were the most dangerous thing he carried.

I would definitely like to hear what the cause was.

We will know more by later or tomorrow. It’s ashamed things like this happen.

If it makes big news Nationally. It was a Republican extremist. If you don’t then it was a Democratic extremist.

They are reporting wrong way accident, driver himself injured.

Oh wow. I still feel awful for the recruits, but now I guess I feel a little bad for the driver, too. Still angry at the stupid mistake that hurt so many people, but that’s different than someone intentionally running people over, I guess.

Not sure if that makes the families feel any better.

They are reporting wrong way accident, driver himself injured.

Even driving the wrong way, how do you miss seeing 20 people and how do you not feel the sensation of your car hitting a human?

I hit an armadillo once, and felt that shake my

I once hit a flying goose, and it doused my car in so much blood that I could no longer see the road. I can’t imagine what it’s physically like to hit a person. Probably somewhere between a goose and a deer, except add on a lot more guilt?

Not sure what kind of formation they were in, though. It might not have been possible to stop after hitting the first one. There’s a lot we don’t know. If it’s simple inattentive driving, that goes to show how costly it can be to be distracted behind the wheel. So sad.

Pretty heartbreaking news, just wondering if the driver could have possibly had a diabetic episode or something, or was deliberate which would be a sick thing to do, but can’t wait till the investigation is completed. Hope the driver wasn’t texting and driving.

Last week, I was in a school zone waiting at a red light. The light turned green, and no one moved. I was about to honk my horn (just a friendly little “hey bud, get your head out of your butt”), but then I became curious. How long could these people go before they realize the light turned green?

It turns out, a long, long time. Eventually, a police officer walked up to a car and knocked on the hood to get the driver’s attention. He then raised his arms in the universal sign for “WTF???” and traffic started moving. It was a pretty phenomenal display of inattention, and to repeat myself, it was in a school zone! 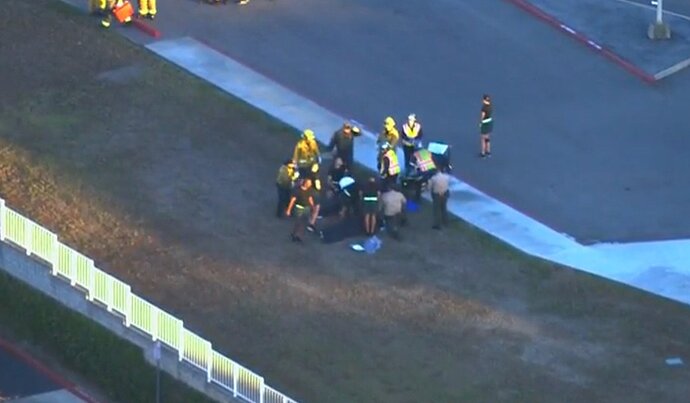 Suspect Who Plowed Into Police Recruits Released From Jail

The Gateway Pundit reported on the more than two dozen LA County  sheriff recruits that were injured after being struck by a wrong-way vehicle in Los Angeles in what authorities believe was an intentional act. According to the...

Wow, so they think it was intentional?

Not guilty your Honor, the California vehicle is an Uber Self-Driven EV taking me to work as I’m sitting in the rear seat.

“YOU ARE FREE TO GO”. Unbelieveable!

This PERSON should be held in jail without BAIL!

That video is making it hard to sleep

. I have seen some brutal, messed up, fubar crud in my life. This takes the cake.

Then they release him.

A real joke, can’t talk to a nut job out of pulling a trigger. And when they do show up a lot of damage is already done with more to come.

Here’s another one. This time, a driver smashed his vehicle into an Apple store.
Driver in deadly Massachusetts Apple store crash arrested, charged | Fox News

Let’s see if Massachusetts releases this driver as quickly as California did.

The actual body count was 25 people injured, 5 seriously injured and the report is that it was a deliberate act, not some unconscionable act of negligence. One of the injured cadets is now reported in grave medical condition. I don’t know if that was the one that lost a leg or had the head injury.

I worked for 25 yeas in the court system. This is the first time I have ever heard of an accused being released because they don’t know what to charge him with. For starters, how about negligent driving resulting in injury to another, a possible felony and with the ethnic background of the accused, fleeing to a foreign jurisdiction is not out of the realm of possibility, so surrendering a passport is not a step to secure against fleeing. Many folk of hispanic background flee south when accused of a serious crime. I know of at least one country south of the southern border that recognizes dual citizenship and I am confident there is more than one.

This is an egregious attack on law enforcement. The cadets were in formation running by the side of the road. This creep drove deliberately across the road and into the formation. He forgets everybody and their cousins have cameras these days and he is caught on videotape smashing into the formation. It is chilling to watch, although I notice now that at least the local TV station isn’t showing him veering across the road. Somehow that footage has disappeared. It just is showing the aftermath when the emergency response vehicles are on scene. dThe veering wasn’t something that happened suddenly as if one had dropped something and was reaching for it, it extended for a long enough period to establish a head-on position to drive directly into the formation. An accidental steering would’ve continued on off the roadway onto the shoulder.

I was always among the first to criticize cops who violated the law. I have always been of the opinion that law enforcement and the prosecutorial staff should be like Caesar’s wife, above suspicion that they were bending the rules. If we can’t convict following the rules, we shouldn’t be prosecuting and wasting taxpayer money on legal games. I was shocked to learn that at least one cop whom I believed to be a square shooter was firmly of the belief that it was okay to lie on the witness stand to establish probable cause.

That said, one of the first reasons for government is to insure the safety of the folks founding that government. First against foreign enemies and then against domestic violence. Except for ourselves, and in some jurisdictions, California being one of them, that right has been usurped and granted to the police. An attack like this is an attack on us too, even if just on the basis that no man is an island unto himself.

Well, I could go on but will spare you, generous readers, the rest of my diatribe.