Patriotism and Actions That Conflict with the Message

Two things I have noticed that I think conflict with US patriotism.

Prager U has an insert in You Tube about standing up for the flag and the thumbnail has someone holding the flag around their shoulders. It is borderline on advertising, but clearly using the flag as a garment.

USCCA has been sending direct emails and has an add on the website using this image with someone wrapped in the flag. Violating both rules, advertising and using as a garment. 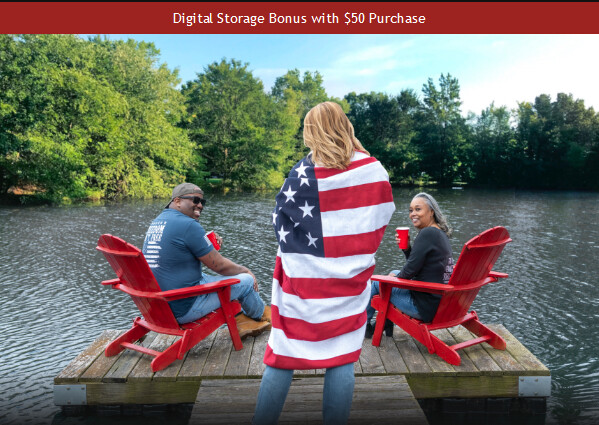 For those who are interested, here is a link to the U.S. Flag Code.

Similarly, flying a flag in the back of a pickup until it is tattered is in violation. Leaving the flag displayed in the pickup after dark with no spotlight is also a violation.

My request - If you are going to display the US flag to show your patriotism, then learn and follow the rules to show it respect. Don’t use it as a political tool or for adverting. Fly it correctly and with honor.

Thanks for letting me rant.

On the first, I think you express a valid point, but I wouldn’t make too much of it. Many of our official holidays float. New Year, Independence Day, Veterans Day, Christmas, and now Juneteenth are locked to a date; but Memorial Day, Thanksgiving, Labor day, Presidents Day, etc. are tied to weekend cycles. Pearl Harbor Day and Patriot Day are in remembrance of specific events, but not official holidays… and even then, most people call Patriot Day “9/11” or “September 11th.” I think most Americans know exactly what “4th of July” represents, even if they have a shorthand way to say it.

On the Flag Code, I’m 100% with you. But over the years, I’ve had to let it go, because I was stressing myself out. Yes, I wish more people would take the time to understand how to treat the flag. It’s not that hard. But I also recognize that a lot of people aren’t intentionally trying to dishonor the flag, they’re just ignorant of the nearly-century-old customs. Service Members and veterans don’t have these same issues, but then again, the flag code was born and updated from recommendations of veteran organizations.

In the meantime, watch the upcoming parade of nations at the Olympics (if the parade is allowed). You can tell pretty quickly who the veteran athletes are. They wear their berets correctly, they aren’t wearing a flag like Superman’s cape, and they don’t throw a hissy fit when the National Anthem is played.

I don’t care much that folks call it the Fourth, what I care about is that folks know why. As for #2 I was not aware of all these rules , so thank you. Never cared for flag clothing, chairs, towels, napkins & the like. Have a question though, what about flags with a blue, stripe & the others?

what about flags with a blue, stripe & the others?

That seems to be a sensitive topic.
Personally, I don’t like marking the U.S. flag so as to give it a different meaning. But if I say that out loud, people think I want to defund the police or that I don’t support firefighters. I actively support both, I’ve just never been a fan of the thin blue line or thin red line flags. But I’m a bigger nerd about this than most.

It probably helps to remember that our flag evolved as a symbol of protest, rebellion, and revolution. So I should probably give my fellow Americans more leeway on the manner in which they use the flag.

I remember as a kid in early elementary school we were taught various flag rules. We also said the pledge daily. I still have dim memories of being told things like you never let them get faded and tattered; if they start to appear so, you have them properly disposed of and not just tossed in the trash. Also never let them touch the ground or use as a decoration. That was a long time ago, though. I’m sure the ‘never drape the flag from your dinosaur’ rule no longer applies.

what about flags with a blue, stripe & the others

According to the falg code,:
The flag of the United States shall be thirteen horizontal stripes, alternate red and white; and the union of the flag shall be fifty stars representing the fifty states, white in a blue field

So, a flag with a “thin Blue Line” or Thin Red Line" is not a US flag. An exception would be an earlier flag from before we had 50 states. That would still be US flag, but should be retired.

Similarly, red, white, and blue clothing with stars and stripes is not the same as clothing made from a flag.

‘never drape the flag from your dinosaur’

An exception would be an earlier flag from before we had 50 states.

I don’t think there’s any official rule on outdated patterns. Not that I’ve ever found, anyway. I’ve seen different groups handle old flag patterns in different ways. Some have modified protocol, or even treat it like a non-U.S. flag.
The version I like best is an organization I’m in which treats any flag the same, so long as it conforms to the first authorized description of the U.S. flag from the Congressional Marine Committee in 1777:

Resolved, That the flag of the thirteen United States be thirteen stripes, alternate red and white; that the union be thirteen stars, white in a blue field, representing a new constellation.

So if it’s a 13 star or 48 star flag, we still render the same honors that we would a 50 star flag. So we never dip the flag, we always salute it, etc. But we always give the 50 star first precedence, so it’s centered on stage or at the lead of a procession.

what about flags with a blue, stripe & the others?

Based on today’s climate, those who fly flags in support of LEOs, first responders, etc. are on the “patriotic side” of the aisle so I’m not going to second guess them.

Have you met a bleeding heart liberal flying those flags or any version of the US flag?

Have you met a bleeding heart liberal flying those flags or any version of the US flag?

Not sure exactly what “bleeding heart liberal” means to everyone here, but yes, I’ve known many first responders and service members who vote Democratic.

many first responders and service members who vote Democratic.

Just curious, how has that worked out for them the last two years?

Like everything else, I suppose it depends on who you ask.

Not sure exactly what “bleeding heart liberal” means to everyone here

I had to clearly qualify that so as not to offend classical liberals.

liberal flying those flags or

Haven’t seen any real liberals for a long time. There could be a few left, probably in hiding. Don’t have much hope in them ever returning.

& thanks for the answers, guess I’ll just fly the real one.

Appreciate your post Jonald. I don’t mind that others disagree with how much I respect the flag similarly as you described. I guess it’s related to beliefs, and or upbringing. I must think that they do not mean harm, maybe they do not know better, and they meant well in that they respected it enough to purchase it. I will not change their minds overnight, but I’ll try to educate in baby steps. Carry on friend.

Haven’t seen any real liberals for a long time.

We are a people without a home.

Can we extend this to the National Anthem as well?
As a veteran I do get irate upon seeing people who don’t remove their headgear for the Anthem. Hell, half of them won’t even put their beer down or pause the conversation.

If you need to retire a flag please fold it properly and give it to the Boy Scout or the Knights of Columbus. We have a cerimony for that purpose. It’s really a reverent cerimony with deep meaning.

I used to be involved in high school sports. Based on my observation, kids who don’t show respect for the National Anthem get it from their parents. Then, they become adults and pass it on to their own children.