I took my CCW renewal course with an old friend. I passed the shooting portion, but my friend didn’t with one of his pistols, a .357 Derringer, so had to reshoot later in the week.
Didn’t pass again—in all fairness the course of fire went all the way out to 9 yards which is a long way for a Derringer with a heavy trigger and no sights—but passed with his revolvers.
He really wanted his Derringer on his CCW permit again, and asked to shoot again.
They asked his age and he was informed that at 80, he was too old and the State of CA wouldn’t renew his CCW permit.
OK, has anyone else in CA heard of this?
It sounds like discrimination to me

Yeah it does. Sounds like a few other things as well, and adding in the fact that he qualified with his revolvers makes these things even more pronounced.
Disclaimer…not in Cali…phew.
California, making Connecticut look free!

Maxine Waters, 84, and Nancy Pelosi, 82, still in office there, he shouldn’t be denied his CCW.

Man O Man, the more I hear about California the more I understand what is being said about it. And to think they actually want to put Gavin Newsom on the 24 ticket for President…

First time I heard of age as a factor.

I once was with a group that included an elderly guy on a walker.
While his condition gave him special consideration, he was treated like everyone else, subject to the same qualifying scores.
Sadly, he struggled with safe gun handling.
The provider of CCW course took him aside to politely tell him that he didn’t make it.

Those of us that passed were given certificates that we need to attach to our application packet to be submitted to the sheriff’s office.

If you follow the same process, seems to me the one who mentioned the age limit wasn’t from the issuing agency (sheriff’s) but a provider of CCW course.

Can your friend try getting a second opinion from another provider?

Can your friend try getting a second opinion from another provider?

Sounds good. And practice up with the derringer or just cut the losses and take the permit and be happy with what you can carry.

He can also choose from 25 other states where he wouldn’t have to be infringed upon. 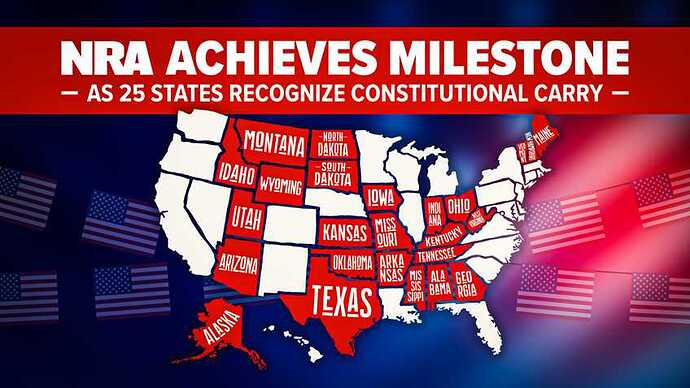 Can always head for the basement and run for President!
Just lost my breakfast, somebody mentioned Newsome in the same sentence as 2024? That’s the day we start the purge!

Do we have any information on the other southern states about the progress of constitutional carry being passed in them?

Personally I would not want to carry a firearm I couldn’t make reliable hits with out to at least 10 yards. But if he passed with the other firearms, denying his right to carry would be age discrimination along with a 2A violation. I don’t recall ever seeing any upper age limits in CA carry laws.

Once again the solution to this is to move.

I was involved with Gun Owners of American and the Texas Gun Right Organization lobbying for the passing of Constitutional Carry for Texas. Because of the hard work of the members of these 2 gun rights groups Constitutional Carry passed into law. During the meetings and hearings relating to the proposed Constitutional Carry I never saw anyone from the NRA. Once Constitutional Carry passed the NRA tried to take credit it. Keep in mind, the recent Red Flag gun confiscation law sponsored by the bought pull peddling gun grabbing open border supporting war loving traitor Texas Senator John Cornyn was supported by the NRA. In fact the NRA give the traitor Senator John Cornyn a A+ rating. Once it became known the NRA tried to deny that they support the Red Flag law. NRA is a fraud organization that always compromises on gun laws. They are just a media organization pretending to be a pro 2nd amendment group.

Personally I would not want to carry a firearm I couldn’t make reliable hits with out to at least 10 yards.

Derringers are not designed for that distance, they are for up-close and personal, when everything else has gone wrong.

Derringers are not designed for that distance, they are for up-close and personal,

I always get told the same thing by people with their full size pistols on the rare occasion that I go to the range instead of the local gravel pit and pull out my little LCP 2 or now Max that I sometimes pocket carry. But with those I get 7, 11 or 13 rounds in a pistol that is smaller and lighter than most derringers. I can also make good hits with the Max at 20 yards if I practice regularly.

I find derringers interesting from a design and historical perspective but for me at least there are much better and more capable modern SD options available.

WithOUT counting the Bruen decision, there doesn’t have to be anything about age since CA is a May Issue state and thus can say no without even having to give a reason.

Though, now that the Supreme Court has said what it has…

I find derringers interesting from a design and historical perspective but for me at least there are much better and more capable modern SD options available.

I agree, however, everyone gets to choose their own preferences. I prefer my PX4 in .45ACP.

Or just the difficult portion for the derringer fans?

I just watched an 80 year old store owner on the news. He shot a robber armed with an AR. He used a shotgun and hit the scumbag who ran away, screaming that “he shot my arm off”.

It was a feel-good moment. Sadly, the store owner suffered a heart attack afterwards. The news said he was expected to recover though.

Did y’all see the cideo this morning of the 80 something store owner shoot a robber pointing an AR/AK at him. The owner opened fire first and the robbers ranout with one screaming “he shot my arm off”!