'Let Me Tell You a Secret': AOC Whispers to Her Followers That Most People...

'Let Me Tell You a Secret': AOC Whispers to Her Followers That Most People...

Wow, she is that stupid.

She ought to speak publicly a lot more, so people see the power of her intellect

Remember the Amazon warehouse expansion proposal a few years ago? This was supposed to have created thousands of jobs in a poor section of the city, not to mention the construction jobs to build it and future renovations in residential areas. OKC campaigned to kill it - and this from a twit who didn’t know what a garbage disposal was in her apartment!

Just remember that someone elected her, i.e., there is a number of people that like what she says, the way she says it. Is there any hope that you and I can ever see eye to eye with these folks? Dunno.

Precisely - her constituents can’t be more than a bloc of piss-pathetic freebie-snatchers.

We need our own AOC media darling, but with a full brain. Now I fully understand what they meant when they said “if they had half a brain, they would be dangerous”. This is what half a brain looks like, together with all the other half wits, that’s just a recipe for disaster, that we are already living in! They’re not calling it the “Vampire State” for nothing!

Wasn’t it George Carlin that said to “beware of stupid people in groups”?
It was funny then but extremely dangerous now! 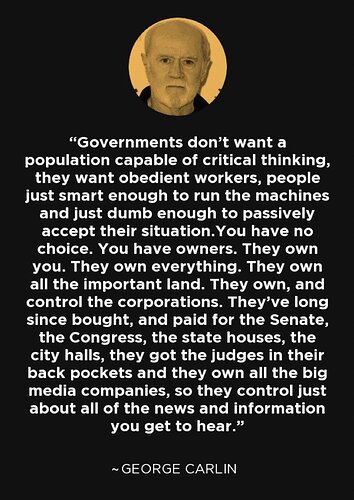 I emphasize his “critical thinking” point - trust NO ONE!

Occasional Cortex… She makes my head hurt. She is part of the Congress that is in charge of spending, and we have around $30 Trillion in debt. She can’t balance a checkbook. Anything she says is suspect in my opinion.

What’s surprising and puts a wrinkle in my “occasional cortex” ( love that, by the way ) is that she’s blowing up on social media! All media!

When I opened my art gallery, I was told personally by Bob Kane ( yes, that Bob Kane ) that “no publicity is bad publicity”.

We’ll, let me tell you a secret of why we spoke. ( no need to whisper here ).
When I opened my business I had a giant front, street side display window which I wanted to paint a mural of a Vargas Girl ( that’s NOT the one, can’t post it here either ) as an advertisement. 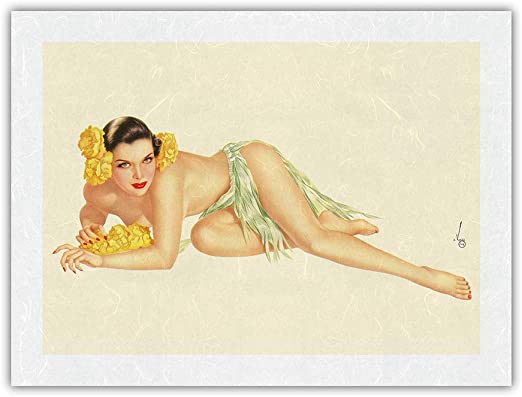 My concern was that my window was the bus stop for many young children. So, I had to wonder how many children are going to run home to mommy exclaiming, there’s a naked girl on their bus stop window!
By the way, there was no such thing as political correctness back then.
It was a my own moral thing! So I decided to contact some high end people in the art world, one of whom was the creator of Batman. He quoted P.T. Barnum. “There’s no such thing as bad publicity “

“Occasional cortex” lives by this standard. I, however took the safer route based on city ordinances and decided, to invite Ronnie Wood to my gallery instead. Yes that Ron Wood, he’s an artist!

Long story short, I don’t know which would have been cheaper, Ronnie, for an hour and a half, upwards of $50,000 or the city fines and moral protests at my gallery??? Thinking back, I should have gone the “occasional cortex” route! I could be whispering to my accountant about earning 20% on the beach! Instead I’m earning 2.5% on my lanai. LOL

I’m a firm believer in chaos theory, had I gone with my first instinct, we wouldn’t be talking about AOC and Brandon would not be sitting in the White House! My bad! 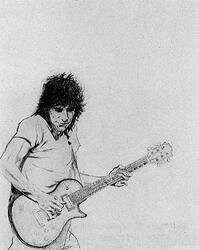 Basically a broke ass bartender who got lucky because her party decided to make/market a domestic Greta Thunberg, now feels compelled to tell everyone how to live and constantly embarrass the party who created her. Sad… but highly entertaining.

AOC is nothing but an idiot when it come to economy issues. And she is always going to be one. As far as I’m concerned she should go back to tending bar. Atleast there she knows what she is doing. 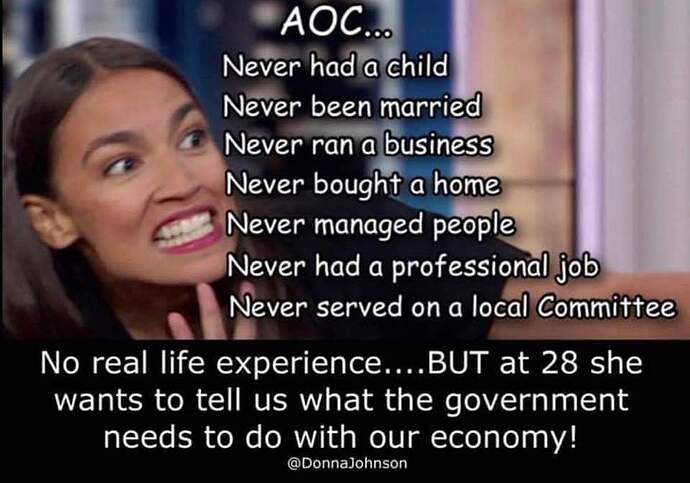 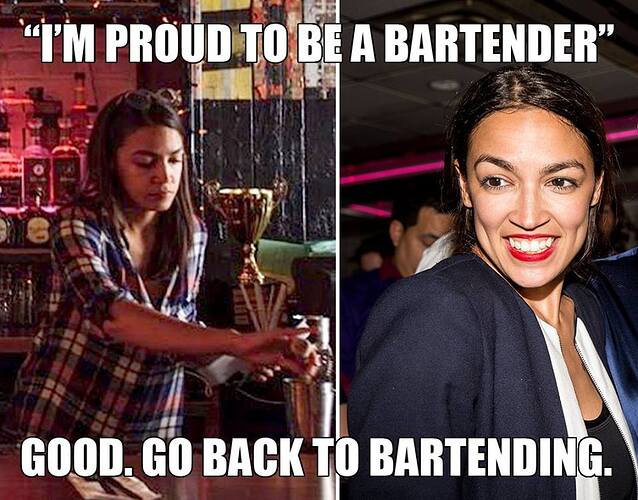 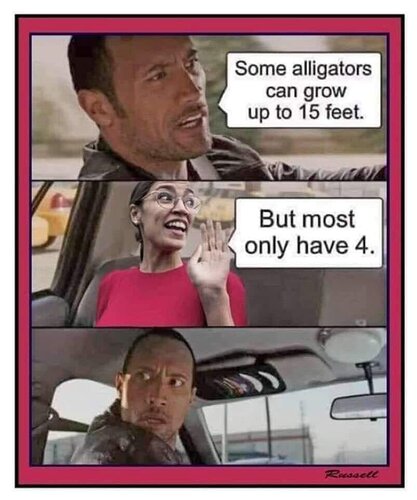 What’s surprising and puts a wrinkle in my “occasional cortex” … is that she’s blowing up on social media! All media!

She has a huge social media following. Don’t underestimate the influence she has.

The really sad thing is that our public school system has done such a pathetic job, that there are enough stupid people to vote her into Congress, and even worse there are people who actually believe the garbage that she says!

there are enough stupid people to vote her into Congress,

The key word is “re-elect.”
First time could be a fluke. Second time was just inexcusable.

If she REALLY wants to experience the full “benefits” of Socialism, she should move to Venezuela.

If she REALLY wants to experience the full “benefits” of Socialism

For years, I’ve been trying to get my head wrapped around Socialism (i.e. Communism) and National Socialism (i.e. Fascism). I know they’re different, but to a freedom loving Murican, they’re ugly twin sisters.

I still don’t really understand why they’re different- why someone would embrace one but not the other- but I saw a short documentary on Mussolini that was a bit enlightening. Il Duce was ousted from the Italian Socialist party for his public opinion that Italy should join the Entente in WWI. (He claimed the war would propel Socialists to power, especially in Russia… so I guess he was on to something.)

Mussolini then denounced socialism, because its existence is based on dividing people. Socialists specifically encouraged class warfare between the rich and everyone else, but it would always require an internal enemy to rally supporters. (Sound familiar?) His ideas on Fascism were basically to flip the script, so that socialism united people, by national identity. From its infancy, Fascism had violent encounters with Socialism, in part because they disagreed on whether the Great War was all that great, but also because of this core difference between class warfare or national identity.

We’ve seen appalling results from both Socialism and Fascism, but that seems to be the root distinction between the two… at least initially. It’s interesting to note that every time I’ve heard an actual socialist speak, they’re still using the 1912 playbook: divide the people by class, overthrow those in power, and then assume that power as their own.

Inexcusable is not the right term. There is a demand for what she is selling, and pretty big one. Why people have such self-destructive desires, is another question.

You people should show our elected officials more “respect”. 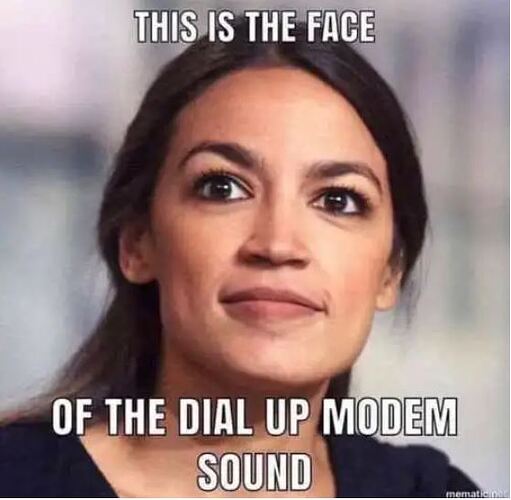 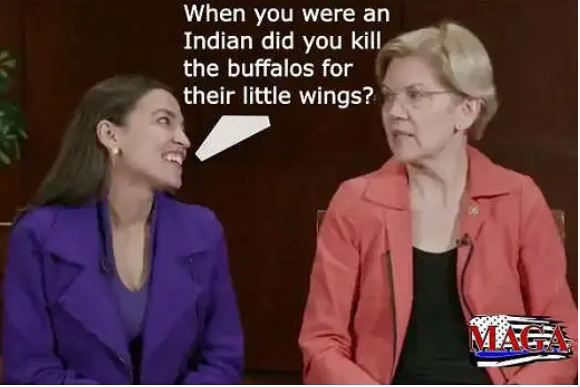 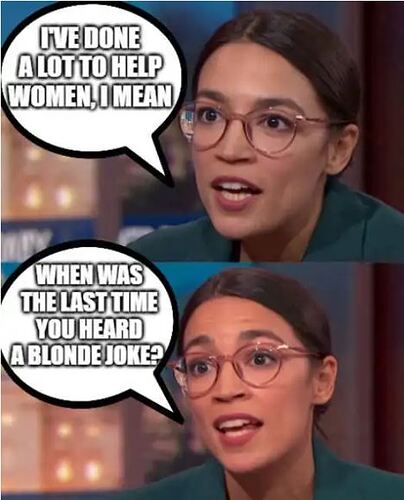