Ignorance Over Reaction or Proper Response 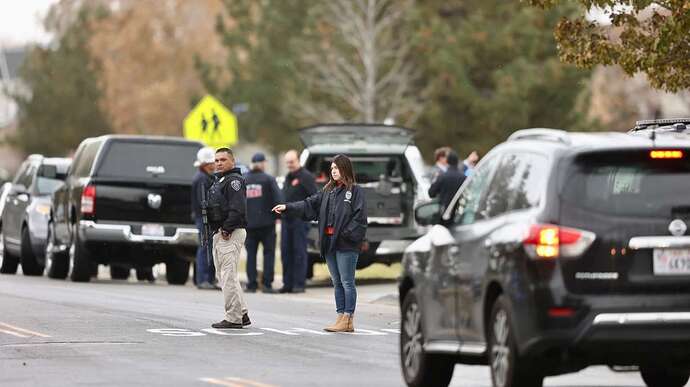 Granger Elementary School was evacuated Monday after police received a report of shots fired. Officers quickly confirmed, however, that no shooting actually happened and that a teacher mistook a science experiment in another classroom for gunshots.

I get kicked in the head for my response to these every time but here goes.

This was a disgusting over reaction caused by an ignorant teacher. It serves to scare the kids and parents and to keep words like “gunshots” in the head lines. It’s totally driven by an unrealistic fear of firearms and attacks on schools. We certainly need to keep our kids safe at school however, as illustrated in this case, we frightened them, traumatized them, for no reason. We need staff at schools that are able to make the correct decisions on the second by second basis needed during an incident. Instead we have “A teacher in a classroom heard what they thought to be shots fired and contacted police”.

Off my Soap Box Now, let’s hear the “Yea Buts and What if’s” that totally ignore the reality of what just happened.

Not having been there, I guess I can’t say much. But I’d much rather hear a teacher say “oops, that wasn’t gunfire, my mistake” than “oops, I guess that was gunfire, my mistake.” (Assuming the teacher knew what to do in case of an active shooter; I have low confidence in this.)

Part of the issue might be plain-old unfamiliarity with firearms. I’ve had plenty of times where someone in my group thought they heard gunfire. But how would they know? They’ve only heard it in the movies. Let’s be honest, if you’ve never been shot at, you probably don’t know what it sounds like. Throw in the myriad of different types rounds and angles they can be fired from, and it could get confusing.

Where I live, it’s common to hear what sounds like gunshots but my wife would just calmly ask, “did you hear that?”

A local gun store should take this as a teachable moment and start raising funds to bring the kids to a field trip at the range.

Totally agree. I’d say the science teacher should have anticipated this response, and warned classroom neighbors and administrators.

@Mike164 Nahhh, I won’t drop kick you in the head. I agree with you. Furthermore, I think that since schools have teacher workdays; I would think and have offered in my local area that Teachers go on a field trip to an indoor range and on a separate occasion, to an outdoor range, just for the purpose of hearing the difference in sound as it pertains to firearms. This will alleviate the confusion between incidental sounds and the distinguished sounds of firearms.

In other words, “own the mistake,” and not try to justify it by acting out of sorts because of buffoonery.

For me, when I was young, I heard shotguns during duck season, at varying distances, from within a few hundred feet to off in the distance. I was surprised several years ago, when hearing that sound again, back on the Island during duck season, that I still recognized the sound.

Since I took-up handguns, I only hear handgun shots with hearing protection or from outside the indoor range I go to or its sound-proofed shooting area. Hearing a live round outside without hearing protection, I would assume, would sound much different. I have heard outside, on a rare ocassion - off in the distance - what I assume to be a gunshot, but I am never sure as where I live hearing a gunshot in the neighborhood would likely be as rare as the proverbial “hen’s teeth”.

to determine whether you live in a rural or urban area

I live in the 'burbs. I lived in a rural area when I was young.

I live in the 'burbs. I lived in a rural area when I was young.

Did you move? Or did the suburban zombies take over?

Yes, over 400 miles from where I lived as a kid - from Eastern Long Island, NY, to a suburb of Richmond, VA.

I lived in NYC half of my life and know the difference. While I slept at night I heard them in the distance then I just watched the news in the morning.

Plus, your closest neighbor will want to see your new firearm🤣

Given the amount of mass shootings this year, I can’t really blame someone in their position for reacting in this way. They are unarmed, there’s not much in the way of protection, and if something were to happen, they have to react quickly/efficiently. They need more protection and deserve to feel safe. Do I think they should be more educated in general on firearms, yes. Do I think they should have the means and training to better protect the children they are responsible for, absolutely. I do think there should have been some kind of communication about the science experiment. Even if it’s a “by the way, we blowing sh*t up today! Don’t forget!!”

If you have never heard a gunshot in real life then you don’t actually know what it sounds like.

My wife only started paying attention after I brought her to the range a few times. One time, I checked out a commotion in front of our house after she said she had heard a gunshot just before our dog and those in the neighborhood started barking.
I saw two guys running away giggling like they did something silly.
Couple minutes later, cops were circling our area. Apparently, someone was fatally shot less than half a mile from us.

This is why our high school physics teacher was so popular with the students.

I was at a private school band concert many years ago. Rural school. The band played the 1812 overture. They didn’t have any canons. But 12 gauge shotgun blanks fired into a metal barrel make a pretty cool substitute. No cops were called. Likely several in attendance though.

Here’s how I hope teachers at my school would respond.

I can’t imagine this would result in a 911 call at my school.

We are a rural school. Gunshots are pretty common outside.

Part of the issue might be plain-old unfamiliarity with firearms. I’ve had plenty of times where someone in my group thought they heard gunfire.

Last night, I heard a loud “POP” sound, probably about a half mile away. I thought nothing of it. Then I heard it again, and again, and again with pretty consistent rhythm. I really had to start questioning whether it was someone shooting a firearm. I’m still not sure, but I never heard sirens, so probably not.