Do you carry trauma kit?

What would you do if a loved one was bleeding to death because a woman punctured their femoral artery with a knife in a parking lot?

I was at the Walmart in Jackson, Michigan, when a woman was stabbed twice in the parking lot.

The victim was a 40-year-old woman backing out of a parking spot when a car came behind her forcing her to stop quickly. She avoided hitting the vehicle. But two women in the car got out and started screaming at her. One of the women attacked her, stabbing her twice in the leg with a knife.

After the women finished, they got into their car and drove off before the police could arrive.

However, the police tracked down the knife-wielding 30-year-old woman and arrested her. She went to the Jackson County Jail, where she was awaiting charges.

The stabbing appeared on Mlive.

Have you ever backed out of a parking spot and had to stop to avoid hitting a car that came up behind you?

The victim did not even hit the car.

This could happen to you or me.

My mom was at Walmart when it happened, as was I.

What would I do if a knife punctured my mom’s femoral artery?

When this event happened, I had a trauma kit sitting at home in my range bag. But I had nothing on me to stop severe bleeding. All I could have done was to apply direct pressure and pray.

The woman was taken to the hospital but was not seriously injured. But you can’t count on a criminal’s incompetence to protect your family.

Incidents like this are Why Jackson Gun Owners carry pocket trauma kits. I started taking mine after this happened.

What’s in a pocket trauma kit, you wonder.

Mine has four items.

Plus, I am trained in emergency medicine, so I know how to use these tools to save someone’s life.

As a protector, it is essential to know how to stop a deadly threat and handle medical emergencies.

What would you do if someone you love was bleeding to death because a woman punctured their femoral artery with a knife in a parking lot?

I have kits in both cars, but I couldn’t stop major bleeding from a large artery. I think most of us are lucky if we can slow or stop the bleeding until help arrives.

@Jonathan4 - given your experience recently, do you still feel your kit is adequate?

I don’t carry a trauma kit but after reading this I will consider it.

I posted pics of a trauma kit in the post Bag Dump: Favorite Concealed Carry Bag?
Do not forget one for the bedroom, I keep a rather extensive one in a tote.

I am currently packing one of these in my (sometimes) EDC, which has a SWAT-T tourniquet, Quickclot, gloves, and duct tape (or chest seal). 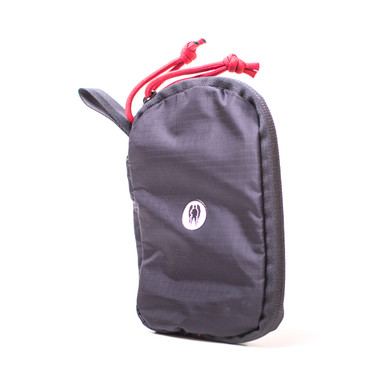 The Pocket DARK Mini Individual First Aid Kit (IFAK) and Trauma Kit is Pocket Sized Trauma Kit Comes With Everything You Need to "Stop the Bleed": Equipped a Tourniquet, Combat Gauze, Gloves, and Duct Tape - backed with our Kit for Life Guarantee!

But I have been looking for something even smaller to make it a consistent part of my EDC. I came across these guys the other day and I have one on order. It looks about the size of a fat wallet, and if it is it will become part of my EDC.

**DUE TO DEMAND/COVID CURRENT LEAD TIME IS 2 WEEKS** The LTC EDC Pocket Trauma Kit was designed so that you can comfortably carry life saving medical gear with you everyday. It features easy to use medical components capable of treating the number...

I have one of these in my car and in my bedroom. 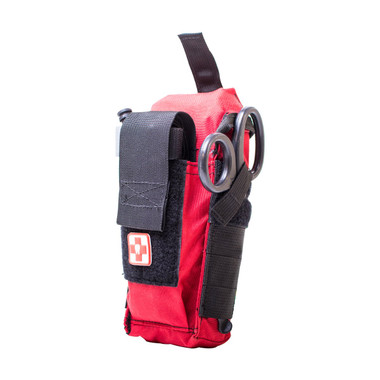 The D.A.R.K. has everything you need, and nothing you don't when it comes to a lifesaving trauma kit. The DARK is packed tightly with more trauma supplies than you can typically find in other trauma kits this size. This tactical style trauma kit, or...

But after my recent experience I started carrying a pocket trauma kit.

A properly applied CAT tourniquet which is what I have can stop a femoral artery bleed or slow it until a ambulance arrives at least. This has been proven in battle. The Quick Clot is what the military caries so I have confidence it works.

Would I be better prepared if I carried more ? Yes and I may add a D.A.R.K to my EDC backpack. But carrying a pocket trauma kit 80% of the time just like I carry a gun 80% of the time is better than not having anything.

The next stage will be practicing applying the tourniquet once a month at the least and ideally once a week. By the way properly applying a tourniquet hurts it’s not fun.

I hate the idea of being powerless to help the people I love.

So I am making adjustments to my EDC

Complete medical kit in the car, modified one left side cargo pants pocket. Always carried one in car, now that I carry, I keep, gloves, tourniquet, QuickClot and Israeli bandage on my body.
Not qualified in tension pneumothorax. Although was trained when in the service, but would not attempt on a civilian unless I was re-qualified.

I have an IFAK and 2 tourniquets in my truck at all times. I am also getting ready to order 3 more tourniquets to put in my go bag.

About 6 different kinds. From as small as an ifak to as large as a closet. Just my nature from my training military and civilian.

I carry my IFAC in my vehicle. I wear a RATS tourniquet around my waist. Run the end up against a belt loop and tuck the rest around me under my belt (inside of my pants). John Lovell have a video about the RATS and I got the wrap around idea from him. I intend to get one of the ankle carry kits from Warrior Poets Society. Seems to be the easiest way to carry a basic IFAC on you at all times.

Yes I do, and I try to add to it or upgrade it as I can

Great link Bruce, thanks for sharing.

@John384 I like and carry RATS also, I have 4 now in different kits. It can be used and reused in training and it can be used on children and animals so it is very versatile and easy to use.

In my go bag

Full blown kit in the camper shell of my pickup . Worked with the Yuma Fire Dept. to get the " Stop the Bleed " program to come here . Had a good turn out , but there were several open seats over the weekend . Had several experts examine my kit to be sure it was good to go .
Chris

Great question… Whenever possible, I wear my ankle cuff with Celox hemostatic dressing, SOFTT wide tourniquet, gloves, 2 Hyfin vented chest seals, and an Israeli bandage. In both cars we carry USCCA trauma packs, In the kitchen we keep a SWATT, RATS and SWAT tourniquets, Celox, Israeli bandage and Hyfin vented chest seals. I have read and studied and practiced out of the USCCA trauma first aid training book and plan to take the e-learning course soon. but with all these life-saving tools including the weapon systems that iedc on a daily basis and train and practice practice practice, it all comes down to that moment that if and when we have to, will we act…I’ve committed in my heart that I will, but I pray God give me the courage to act, if and when call on to do so.

I am a truck driver so i have a EDC bag i carry in my passenger seat of my truck while on the road and i have med kit on the front but i would not say truama kit i dont have the right stuff inside.