I don’t care what flag people fly, but they don’t always convey the message they think.

Why not? Are people allowed to display Antifa and BLM logos, etc.? I find that far more offensive given their short history of violence and destruction. No one is a CSA citizen. Further the “Confederate” flag is the flag of the Army of Northern Virginia, therefore it does not represent the CSA. It is not the flag of the CSA. When I was a kid in NY, people used the “Confederate” flag as a symbol of rebelliousness (not in the sense of the Civil War), that one was not a sheep, but a “free soul”, etc. It carried no essence of belief in the CSA nor slavery. I understand that certain groups in the South may not view that flag in that way, but we also have people that hate seeing religious symbols in public, too. I believe in tolerance.

Real flag of the CSA 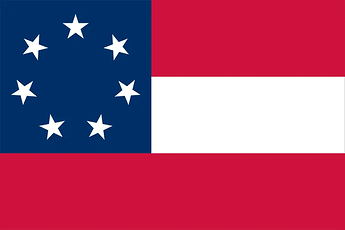 Flag of the Army of Northern Virginia

Allowed to?? Are you suggesting that “free speech” must be pre-approved in public spaces? That’s Lefty talk!

Yes.
The flag means different things to different people. To this swamp Yankee it represents southern heritage, nothing specific and nothing bad. Got kids in my New England town with the flag in their pick ups…think it’s just "redneck pride to them(not the original coal miner’s with the red bandana)…and once again, no issue from my perspective.

Why the heck not?
Note: There is no legal, moral, civil, or legal right not to be offended. It may be rude to do something that offends another, but it is not wrong under any of the rubrics I listed.

They should be allowed. Now is it wise for somebody to do it is another thing.

Now is it wise for somebody to do it is another thing.

All depends. If you believe in “grey man”, you are not wearing any logo clothing or patches, etc., so it would not matter if it was a “Confederate” flag, a USA flag, or Snoopy. If one is proud of one’s Southern heritage, one would likely sport it, regardless. I personally don’t care. Like a cross, it has no value to me. It only shows that one has commitment to one’s beliefs. As long as the person is good, it does not matter.

I dont personally care either. It’s the way our country is right now in that it will attract unwanted attention. The kind of attention that could lead to property damage including your house getting burned down by BLM.

I think the CSA had 5 flags.

The CSA flag I posted was the “official” version, and the flag of the Army of Northern Virginia that I posted was one of the first designed. Other designs of the latter flag are all similar to the one I posted, some with fringes or other slight variations.

Exactly. Being “Grey Man” means blending in and not causing anyone to notice you or remember you. I am descended from Founding Fathers Timothy Matlack and James Madison, so I literally have rebelliousness in my DNA. However, I do not have stickers on my truck, and I don’t advertise any Pro-2A sentiment (as it can be used against you in court should you have to defend yourself with a firearm). I have given-up trying to change anyone’s mind, as at this point, everyone is on the hill they are going to die on. I am preparing myself and my family for the hardships to come.

As for the Confederate flag, the “Battle Flag” was white, with the “Stars & Bars” in the top left corner, and a vertical red stripe at the trailing edge. Then again, during the Civil War, state units carried their state flags into battle, as allegiances were to one’s state before any unified government.

Freedom of expression. I don’t have to like it, just like I don’t have to like swastikas, blm flags, “abortion is healthcare” signs, etc. But last I checked, this country was still the last bastion of freedom on Earth, thus still worth fighting for. So, yes, they ARE allowed to display the confederate flags’ likeness, whether anyone thinks they shouldn’t be or not.

My friend whom I have served in the military with, described for me what the confederate flag meant or means to him. It caused fear. I am totally respectful of his feelings on the matter and have personally decided not to display it. On the other hand, that flag means different things to various people. This being a nation that promises the right to expression, I have a hard time suggesting limiting its display by remotely suggesting to others they may not. Freedom means the same to most.

Hello and welcome @Rickey13
Displaying anything these days is bound to be offensive to someone and the mobs will do everything they can to get their way. It’s sad.

People should be able to display whatever flags they want.
Sayings, statements, avatars, whatever. It is supposed to be a free country.
I see alot of things I don’t agree with, but whatever floats your boat.
It takes alot to truly offend me, but symbols, flags,etc, nope.

However when a group goes after others and start censorship and infringing on others rights to express themselves, I start taking notice and definitely have problems with that group…

Free speech is either protected in this country or it isn’t. If I want the right to freely express myself, then I owe that same right to others. I find hypocrisy much more offensive than speech I don’t agree with.

Welcome to the community @Rickey13 .

This being a nation that promises the right to expression, I have a hard time suggesting limiting its display by remotely suggesting to others they may not.

I agree on this. Either we are free to express ourselves or we are not.