A is for April Shooting and it consists of four aces and with four seconds on the clock and the target at 21 feet or 7 yards away one round per Ace for a total of four rounds. This drill will challenge your accuracy under a time limit while acquire different targets. The four seconds is listed because it is the fourth month of the year. If you can get off four rounds faster, then by all means let us know your time. 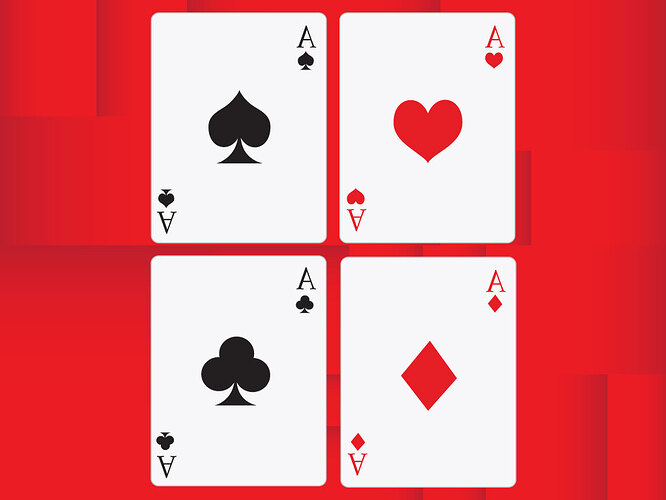 This is just regular playing cards taped to a backer?

Don’t think I’m going to get to do this at the range, so I took it out to the backyard, and used my Sig P226 air pistol. These are @Todd30’s cards stuck on my own background, and rendered at 3.5” tall (regulation playing card size).

It’s definitely a tough shoot at only 4 seconds. 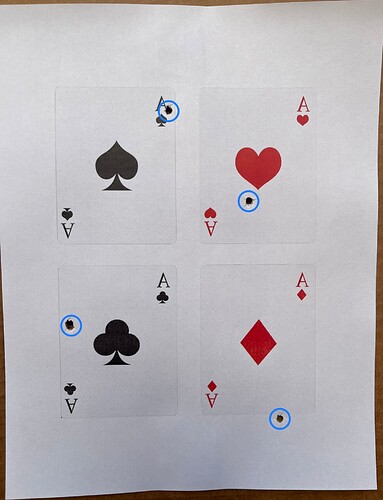 Thanks for this one @Todd30. Now I’m much more confident in the saloon while playing poker.

This is going to be a good one. Thanks @Todd30

Replica Air Guns/BB Guns ARE a Good Option for Training and Practice.

The S&W M&P Replica BB Pistols are exact same size as the Real Thing and the Triggers (Arguably the most important thing in shooting “Accuracy”) are much like the real thing.
Sights are 3 Dot - like Standard M&P guns.

And they shoot true to the sight alignment/Sights and Good Trigger Pull.
And fit in Real Holsters made for S&W Guns.
I use the cheap Paddle Holsters - just tuck in pants over your belt.
Can get RH and LH.

At 500 fps they will punch-thru Cardboard Targets.
AND the Ammo, BB’s are Re-usable.
Get a wand-magnet to pick up BB’s.
Wear Glasses incase of rebounds etc.

I use them for training. Have several.
Strap on a holster, show/teach how to draw, present, grip, sight-alignment, trigger control,
Gun Handling and Safety, etc
Shoot CARDBOAD TARGETS, like IDPA/Man-Size Cardboard Targets. Mark hits.
Set up movable wall corners and you can teach Combat Tactics.

You can set up a Shooting/Training area in your garage and “have at it”.
Good practice. And Fun.
Save Coke cans for kids - have a Ball and teach them young or friends.

Caution - You DO have to watch for hard surfaces like metal - At 500 fps BB’s can rebound and
500fps is No Joke. Use shooting Glasses for all.

Only thing you Dont get is Noise and Recoil.
Teach recoil for real at the Range “AFTER” they are trained in good handling and shooting techniques.
Lot safer and cheaper. 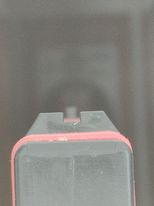 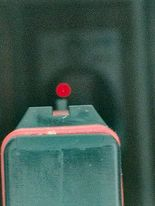 These also helps me with my range time and performing the actual shooting drill.

Dry fire, sirt, airsoft, etc, are great for a whole lot of the skills. Things done for multiple shots on the clock aren’t particularly relevant since there is no recoil, but slow fire accuracy, drawing to first shot for accuracy and for time, reloads for some of those, all great. Just doesn’t really work for timed multiple shot drills

aren’t particularly relevant since there is no recoil,

Still not particularly useful to run multiple shot drills on the clock since there is no recoil recovery or tracking of the sight.

You also may not know how good your grip is, until there’s recoil in play

I guess every tool has its purpose, but that doesn’t mean you can’t use use, say a small flat blade screwdriver to fill in for a phillips in a pinch. So while an air pistol won’t have the recoil of the “real thing,” it can certainly have the weight and approximate the action.

My Sig P226 Air is weighs very close to my P226 SAO, and I can say definitively that rapid fire has helped me with both trigger cadence and keeping my eyes on the target as I fire. Practicing at home when I can’t get to the range is a lot better than no practice at all. 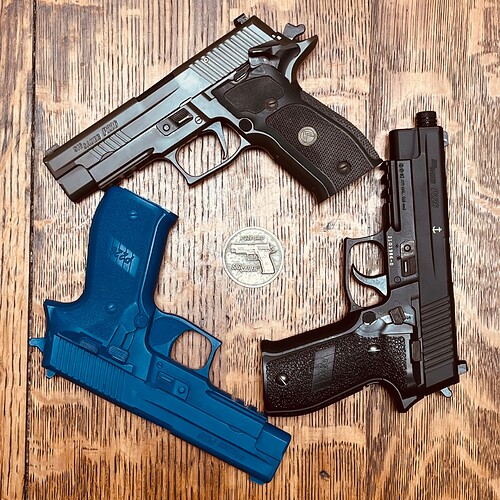 As I have said, I have been practicing this drill at home for about a week in a half.
Went to the range and warmed up then did the drill. 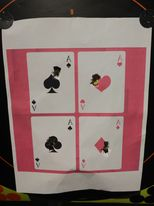 What I have been trying to say. See above.

Set up some IDPA Cardboard targets on movable wood stands in your garage and you can set up a “Shoot House” like the mil does for CQB and XCQB Training.

I do this for training of others.
Fundamentals then :
Teach Combat Tactics CQB and XCQB.
Like you say the All Important Trigger Pull is virtually the same on Air Gun vs Real Gun.

Reduce all the Shooting Variables down to Recoil Control and you are 90% there at a fraction of the cost of real ammo.

When I make a distilled down list, it only has two things on it: Front sight (or optic reticle), and trigger press (without disrupting the front sight/reticle). For practical self defense pistol shooting, that’s most of it, and for each individual one-in-a-vacuum shot, that’s pretty much 100% of it…if the sight is on target and you press trigger without moving it, the shot will be there.

The rest, stance, body position, grip, seem to me to be all about recoil control so that you can do those two main things in successive shots without taking a long time in between. I suppose they apply to the first shot too, since stance and body position and bring about acquiring sight picture through the muscle memory that puts everything pretty well lined up for you from the start

I did not say Recoil Control was Not Important.
I was saying you can practice most all the “other elements” with BB Guns while saving money on ammo.
Actually you should practice Recoil Control under every shooting position you can imagine. In a real fight for your life you likely will NOT be in a perfect stance etc to control recoil. So practice rapid shooting/Recoil Control from every position you can think of. I do this by shooting in IDPA Matches, monthly. for the last 10yr. Sideways around corners, on knees, flat on ground, fm inside cars/vans twisted around etc, Strong/Weak hand. kneeling, lay on ground, etc even upside-down. Also in Rain, Snow, Sleet, Heat, …
As you say - The other “Fundamental” critical elements are Grip, Sight Alignment, Sight Pic, Trigger Press/control.
Stance, Body Position etc ? In a Real Fight for your life - No telling what position your body will be in.
Nor are you likely to be able to assume a perfect position.
ps Recoil Control shooting Upside Down is a bit different and takes practice of its own.
Running like hell away and shooting behind you with 1 hand is also a diff skill set to practice.

Ok! I get all the positions, but the recoil management?
I hadn’t been to the range for almost a year, when I finally got there, I was concerned about breaking my wrist and the impact my 3” .45 ACP was going to have. This is my EDC.

I took a firm grip, pushed forward, in great stance, put three rounds in the head of target, reacquired target, let the last five rounds go, ( still in head ) checked clear, laid down my weapon and was surprised that I didn’t feel a thing??? There was no recoil. Even though I haven’t fired a round for a year.

I picked up my back up G43x and let six rounds go and I was all over the place ( snappy little thing ).

I had tighter groups with no felt recoil with my .45 than I did with 9MM.
( which is why my primary carry will always be the .45 ) I’ll have to admit I’ve been shooting a .45 since 1978. And no I have not had the pleasure of shooting upside down yet, all other positions yes.
But why didn’t I feel the recoil? 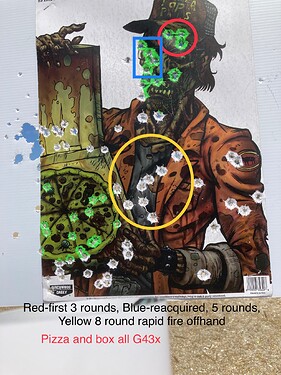 image1575×2100 387 KB
All rounds called. Left arm first two rounds shoulder, next 4 bicep, one to wrist, final round chest, strong hand only.
Distance was 7.5 yards no timing involved all from low ready.
At my earliest possible convenience I will take out those four aces!
Shamrock April 7, 2022, 1:57pm #18

I had the same issues as you @Scott52 after my first time at the range since losing most of my muscle mass due to my medical issues. But I actually did really well with my 9mm’s and fairly poorly with my .380 LCP max. I shoot 147gr ammo in my 9’s. Find it to be more of a push and less of a snap than the lighter loads. But they are also larger pistols and fill my grip better than the little LCP. Though I was pretty fast and accurate with that tiny pistol before the muscle loss.

EGO BUSTED, thought I was better after a year of no shooting!
No choice on distance. Actual practice distance anyhow! 7.5 yards
Speed becomes the factor, attitude and state of mind. Not a good morning, but had errands to run, so I thought I’d stop and shoot.
Best, worst and just for the heck of it!
Kimber SS/TLE/RL Pro .45 ACP from low ready. 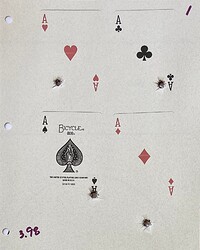 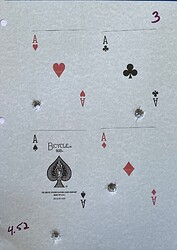 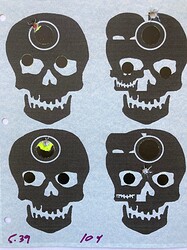 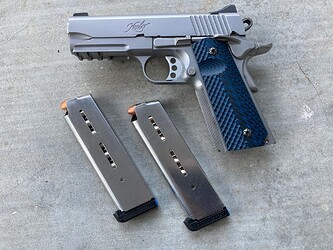 But think of this, AIM SMALL, MISS SMALL! Put a person behind the target and you would be an expert! Actually, this is how I did when I shot cold. Like I said, I practiced every day for a week with my SIRT then went to the range and warmed up and practiced the drill till I got the final result.
This is why I posted this one. It is a drill that will improve your speed and accuracy and can be worked on.
Keep training. practice, practice, practice!