Anyone else stepping up their defensive posture for the next 48 hours?

I’m not quite putting on my tinfoil hat at this point, but I am thinking the potential for violent unrest over the next 48 hours is real. I don’t feel like it’s too far outside the realm of possibility that a “red wave” could lead to the kind of violence we saw in DC by ANTIFA after the 2016 election and around the country during the summer of 2020.

I know when I left for work this morning I added a few extras to my IFAK I keep in my work bag and an extra magazine as well. Especially since I will be on the road most of the next few days till as late as 10p in areas of Pittsburgh and Cleveland.

Not paranoid, just prepared regardless. It cost nothing extra to take just a few extras just in case.

Nah, not really.
I live in a pretty quiet neighborhood. Most of my neighbors avoid getting too political, with the exception of the small parade we had after the 2020 election (some parents felt the need to teach their kids how to hate their neighbors).

There’s a neighborhood south of me that’s crazy political. You can go there any time of year and every lawn will have the exact same yard signs. It’s creepy. Pity the poor bastard that doesn’t have the right yard sign littering his front lawn. I’ll avoid that area for a while.

Anything is possible.
I’m in CA but not in a metropolis where rioting is part of the landscape.
I’ll have some chili while watching the election returns on the tv, as that adds another level of defense to my quiver
A silent but deadly level.

At this point, could a riot in a California city do any damage, anyway? Wouldn’t it basically be a controlled burn to clean up the homeless camps?

unrest over the next 48 hours

I disagree with the time frame, you are really looking between now and well into 2024.

A silent but deadly level.

I got a head start on you. This was my lunch today! 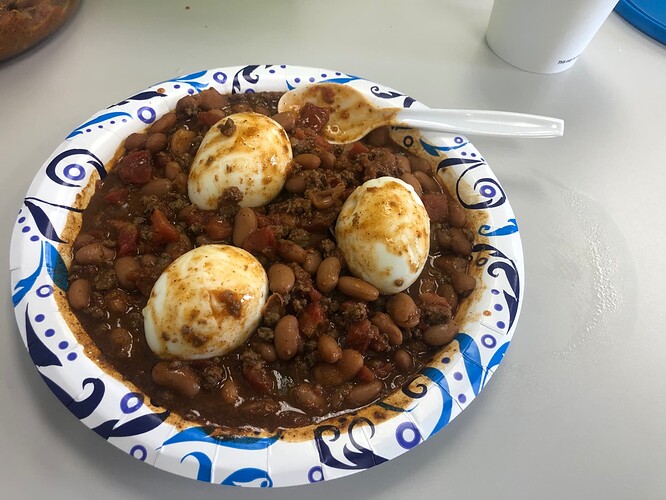 I am thinking the potential for violent unrest over the next 48 hours is real.

TBH, yes. Though I think the window for violence will be much longer. I spent this weekend teaching a survival/woodland first aid class to a group. I then spent last 3 days prepping my shelter in place, and then my backup bugout shelter plan.

Yes. Ugliness escalating to violence highly likely. I feel badly for urban residents in Democrat-led cities. Thus is going to be the nastiest election so far in America. But 2024 is going to be worse. Nonetheless, I am proudly wearing my “Don’t Tread on Florida” Ron DeSantis campaign shirt and “We the People are Pissed Off” hat. And carrying my EDC and permit. If that makes me a target so be it. We fight for the 2nd Ammendment to protect the 1st. Molon Labe.

I can not step up any thing since I am always at the Burnt Orange stage,and I am at the start CUL-DE-SAC and stay in my man cave most of the time and know the vehicles and people that belong on the street and My weapons are spread through the house and got my anti body armor DP-12 ready to go,so no abnormal prep is really needed

Not at all. Most of the loons are about to be voted out, cutting off the remaining loons at the knees. It won’t be much of a surprise to seem 'mericans liking a closed border, education, safety, etc. The few complainers are getting all of the air play.

Not paranoid but more mindful of what’s going on since I work near the state capitol.

Not sure though if people would tolerate the same BS Antifa unleashed a few years ago.

We’ll see with how they vote.

*they - those with voter remorse

Maybe it’s time!
However I think they are just going to stick to their old tactics of stealing the vote and blaming us for all their ills! How many more statues can they bring down, whatever is left to burn in blue states, let it burn!
I know they say “not to be in a hurry to die” at this point, I say BRING IT.
FYI, ever since he usurped the office, I’ve never stepped down my defensive posture.

It doesn’t take much these days!

Never said it was election related. But it was another example of political rhetoric adding fuel to an already lit fire.

Personally I think we should have tried harder! So, here we are!

I’m not quite putting on my tinfoil hat at this point,

Remember using tin foil on your TV antenna to get better reception? I would double think using one as a hat, just sayin’. Connect a battery to foil and it will burn so, please avoid any tin foil on your head!

I hope that all of the statues go back up. I love my country’s history, warts and all.

It’s 35 degrees and raining today, snow tomorrow. Around here the extremely important issues of the day don’t seem to be so extremely important when the temperature dips below 70 and the cold rain and snow start. We had a pretty big anti wall street or what ever they called it, protest/camp here. The city didn’t pay them much attention until they got tired of having to respond to calls to the fire department for frost bite and hypothermia. So No I’m not too worried about it.

People should worry more about the consequences of hyperinflation rather than Antifa. The collapse won’t be Antifa rampaging in the streets, but more like a collapse of the currency that wipes out savings, pensions and cash.

Government (both parties) literally prints money to finance its social programs and military adventurism. Printing money invariably leads to devaluation of the currency (inflation), just as happened in Germany, Austria, Hungary, Greece, Turkey, Venezuela, and Argentina. We are feeling the start of that printing press inflation.

Adam Ferguson’s book When Money Dies: The Nightmare of Deficit Spending, Devaluation, and Hyperinflation in Weimar Germany (2010) offers a good description of what happened in Austria and Germany when their currency collapsed as a result of government printing presses.