A couple of conspiracy theories floating around

Anybody see this video? Sounds crazy but then so did Monica Lowinski.

It’s 50/50 but it never hurts to see the enemy coming!
Heard from a second source, the possibility of the “act” being signed, and POTUS HAS LEFT THE BUILDING! From American Partisan/ Monkeywerx.
A second source gets my eyes and ears perked! Adrenaline is not flowing yet!

The second video is nested on his FB

Note: I do not follow these guys. I don’t even know who they are other than my research today. But both of these guys don’t claim this is prophetic but actual intel from their sources. It was sent to me by my sister. I took it with a grain of salt.

I’ll tell you what. I’m not saying this guy is right. But it could happen. I’m not going to be stuck with nothing. My kids need to eat.

So I am going to get food, bandages, tp, fuel and anything I can think of. Look, these are things that we will use anyway. Why not stock up a little bit just in case. We’re going to use it anyway.

We need to protect our families.

From an Army friend:the video is available but I don’t know how to share it.

SHOCKING DEVELOPMENTS: Highly decorated and respected Lt. General Thomas McInerney of the U.S. Military reveals the TRUTH about who has Nancy Pelosi’s laptop to VP Mike Pence committing treason and dishes out every detail about what is happening in Washington DC. Interview 1/08/21 MUST WATCH!

Patriots, this is one of the BEST interviews and updates you’ll receive by an insider within the walls of the U.S. Military and Washington DC. This is the ENTIRE interview.

If you’ve been searching for the TRUTH about what is happening inside our government - this is another person you can TRUST!

Here is the shortened version. The one I have is 20 minutes ling 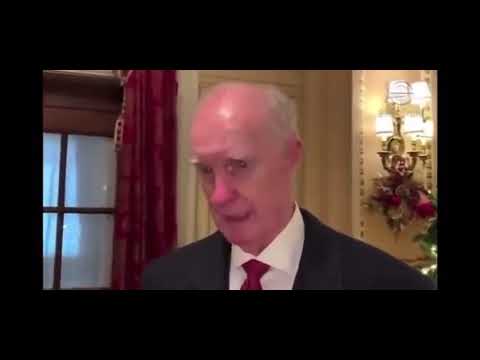 Very interesting indeed. There’s so much more out there than what is being said.

For real? That looks lipsynced!

I’ll reserve my decisions here. Seems to me people need real blood and bullets conflicts to keep their minds sharpened and attuned to real world events. Loose the life or death need for focus and our entertainments in television, movies, and books can evolve with our aging minds into a curtain which, though not fully opaque, can have just enough reality to entrain our beliefs.

If folks really need blood and bullets, have at your preludes to civil war. But, god help you, wake up and realize nothing comes of killing but more of it. The only answer is deciding we are family - here, now. Disagree yes, but there are plenty of other “families” out there who are not - us. And they don’t care one iota but that we are weakened and of no threat to them now. …so they may walk on our bones later… and own these lands we have already paid many a blood ransom for.

If folks really need blood and bullets, have at your preludes to civil war. But, god help you, wake up and realize nothing comes of killing but more of it. The only answer is deciding we are family - here, now. Disagree yes, but there are plenty of other “families” out there who are not - us. And they don’t care one iota but that we are weakened and of no threat to them now. …so they may walk on our bones later… and own these lands we have already paid many a blood ransom for.

It’s not that we want it @CHRIS4 . It’s what needs to be done to keep our freedom. Are you telling me you’d rather live in a dictatorship than fight for your rights? Are you so content with living by rules that you’d rather somebody tell you what you can and cannot do or where or where you cannot work or how much you get to be paid.

Yeah we have laws to keep peace and other things. A dictatorship is something completely different. If we allow them to take over then you won’t even be on this website no more. You won’t have freedom of speech you won’t have second amendment.

This is what people keep forgetting. All you see is violence and death. Unfortunately that is a part of it. But to keep our freedom we have to keep the government in check and right now they are so far out of check it’s going to take violence and death to fix it.

Nobody wants it. I don’t know a single person that wants it.

I’m kinda on the fence with this everyone. If they declare martial law then they are effectively suspending the Constitution and that is a rabbit hole I particularly don’t want to travel. Do I think the government is gone way off the deep end. Yes. Do I think there needs to be change that we need more accountability of them. Yes. Do I think that bureaucrats run most of the country now through the ABC agencies yes they do and that means that Congress has given them the power to pass regulations without much oversight. But to declare martial law means you no longer have the constitution to limit government on what can be done to you the individual. I haven’t seen any test of the national broadcast alert system lately in my area. But I also don’t watch tv much or listen to the radio much lately. So if it happened I could have missed it. I do worry that something like this could be very bad for our country. Not to mention you have have 50 state governments agree to this. And military leaders both active and guard and reserves to also agree to this. And then it goes to state police, county sheriffs, local police chiefs, mayors also have to be on board and what if they are not do they get arrested and replaced with someone who will. See the rabbit hole? Be careful what you wish for. I voted for the current president his challenger is showing signs and symptoms that I have seen before making him I believe unfit. I would be surprised if he makes it through his 1st term. Or that he won’t just be a figurehead doing the bidding of others. Either choice, martial law or figurehead seems scary. Protect your own keep your families close in case things do get bad. I know who I can trust and I know who will have my back if the SHTF. So stay safe all. And stand strong for Our Constitution. Family, Faith, Firearms, Freedom!!!

If they declare martial law then they are effectively suspending the Constitution and that is a rabbit hole I particularly don’t want to travel.

If the first amendment is already on its way out, with the 2nd soon to follow (give it a few months), is a good part of the Constitution already effectively suspended? I don’t like the idea of martial law either, but the trend in the erosion of fundamental/inalienable rights seems clear.

Americans need to open their eyes. Vote responsibly just like we carry responsibly. Learn what’s actually going on. Don’t just turn on ZCNN or Fox News. What all of the networks. Figure it out. Read between the lines. Watch CSPAN and outside MSM. People don’t seem to want to think for themselves. My guess is it’s hard (whinny voice).

Watch CSPAN and outside MSM.

NO!!! They are part of the problem.
We did vote responsibly and the left stole it away.
Whether you like it or not, there is tons of proof that the Democrats stole the election. And it’s not coming from Fox news or ZCNN there’s other sources.

I’m all for the martial law for one very strong reason.
If Trump pulls a martial law, then it will prevent a lot of bloodshed that a straight civil war will cause. Don’t get me wrong, there will still probably be bloodshed, but not near as much.

Do we want to be locked down yet again? NO!! But we have to look at every result of every avenue that we can take.
He’s tried every route possible to wake this country up. To show them the corruption on both sides of the line. I’m in Indiana man so of course I’m extremely disappointed in Pence. That was my guy. In fact when I voted the first time for trump it wasn’t for trump, it was for Mike pence.

But anyways, just sum up what I’m saying. Trump has shown the corruption on both sides of the fence. To show the American people how corrupt the system really is. It is up to us now to see it. If he doesn’t declare martial law, the American people are going to have to do something about it.

Justin, I suggested watching the different networks for people stuck in believing everything they hear on the news. Fox went south several years ago. That’s why I started watching OAN and NewsMax. I do not support the crap being shoved down our throats. So I get you guys reaction. Same here.

Seem to be lots of unverified assertions here.

Gerry, I agree. I just thought this was interesting.

I follow FEMA recommendations on preparing for disasters so I’m pretty much ok with food and water. I don’t own a generator though. Might be time to get one.

Please remember that the USCCA Online Community is a public platform for anyone to visit. Maybe people visiting are new to firearms, maybe they’re very experienced, and maybe they’re stopping by to see how responsibly armed Americans interact with each other.

Our goal is to help everyone learn how to best protect themselves and their loved ones as responsibly armed Americans. If you’ve got questions about topics or restrictions, please review the Community Guidelines.