Your firearm is a really expensive paperweight without ammo. What ammo do you prefer to carry?

How often do you shoot that ammo at the range? Notice any differences in how it performs compared to your target ammo? 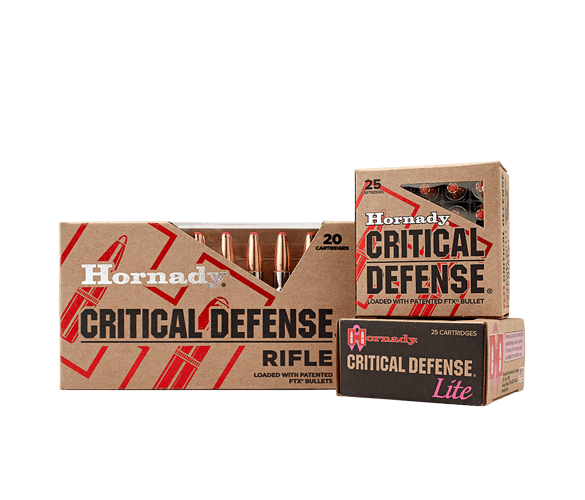 Hornady® Critical Defense® ammunition is the pinnacle in self defense ammunition.

I don’t notice a huge difference at the range. I know you’re not supposed to unload it and reload it into the magazine a bunch of times, so I keep a separate magazine for carry ammo. I shoot the ammo in it a couple of times a year to make sure there are no issues.

What other brands are worth trying?

I use Hornady Critical Defense Hollow Point in 40 S&W I don’t really see much of a difference either. I use that for carry ammo and Remington FMJ for target ammo. I carry 2 full magazines with my self defense ammo and use 2 separate magazines for regular target ammo. Practice with carry ammo once a week target ammo 2-3 times a week.

I don’t know that I have a favorite. Thankfully I have never had to shoot anyone so I can not comment on to which works best. Probably something cheap. If I have to shoot them they are not worth wasting gun money on.

I had bought some Monarch steel cased 9mm. But I’m afraid of over penetration. So I’m looking at SureFire duty hollow points. It seems to be a combo of frangible and hollow points. It claims that it’ll reduce collateral damage. Last thing I want is to shoot the bad guy and then kill a bystander.
@ShawnT why do you shoot your carry ammo?

That’s a very interesting thought, @TWeinzerl. I don’t want to waste money on someone attacking me - very true! As long as the ammunition works well and I can rely on it, it’s good for me!

Not to speak for @ShawnT, but I shoot my self-defense ammo to ensure I know how it shoots when I need it.

That makes sense, Dawn. I’ve never really thought of it that way (and part of the reason I joined this community in the first place: to learn more from more experienced people). How many rounds do you shoot? Just a couple or a magazine of them?

Gold Dots, loaded to +p specs by Underwood. Very consistent, accurate, and hard hitting. It’s also manufactured about 1/2 an hour from where I live, so I can drive right to the facility and buy it right off the assembly line.

I rotate ammo based on time of year… summertime I get Winchester .45 jhp… during the winter I use hornady… if I’m going to the woods or somewhere that i may get wet, I buy Russian wax ring ammo in case I have to cross a stream or deep patch of water…

Love the details and suggestions from everyone!

@luke_ouellette it varies. I know some people put 500 down range a month - some do that in a week - some in six months. A lot depends on what’s going on in my life and my schedule.

There are times when I have to make due with dry-fire practice instead of the range because of other time commitments.

I’m about 20 minutes from the federal plant… do they sell right out of their plant too??

I haven’t heard if they do, @Tankrachet86… that would be a fun tour!

It would be even better if they did what Jelly-Belly does and gives samples at the end of the tour!

I don’t worry about over penetration, with .45, they would have to be at the end of the muzzle I’d think
.

I don’t worry so much with hollow point, from what I’ve learned they don’t over penetrate unless as @Tankrachet86 said on top of the muzzle.