Violence in my little corner of the world

R. manages one of the stores in this mall. Funny thing is, she was at work when it happened and didn’t even know it happened until I called to check on her. Mall security and the city police said nothing to the other stores. 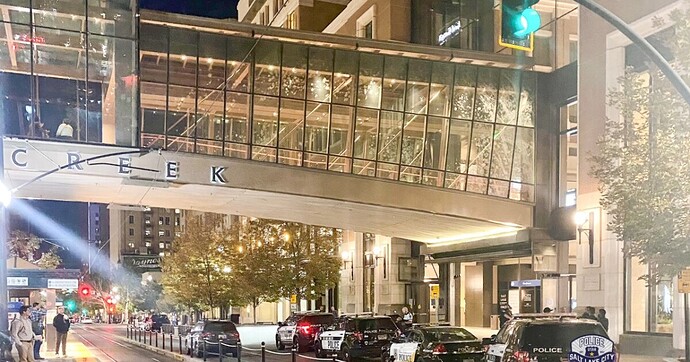 A man was arrested after he allegedly made death threats toward employees, shoppers and police officers at City Creek Center Thursday night.

Gang shoot out across the street from my condo yesterday night, windows in the condo across the hall from us got broken. The news won’t report it though. It goes against the crime is under control in downtown narrative the mayor and chief of police are regurgitating.

2 officers died last week the next town over, made national news, I heard a few highways were shut down for the funeral procession. Schools were closed all over, though not in the town where approximately 10,000 officers and others gathered. Local social media was wound up about not being able to get to work, and the seeming overexposure if this tragedy. Approximately 18 false events were called in during the procession, bomb scares and shooters.I figured our gov along with Blumenthal and Murphy will use this event in their next “assault weapons” attack. The good news was the third officer nailed the AR wielding perp (80 rounds from the POS, in a state with 10 round mags) in the neck with his handgun despite being shot.
Meanwhile, in my backyard,I woke up and had a deer family nosing about.

Dependent upon where you reside, it used to be that no serious regard was given to threats without the perpetrator actually following up on the threat made, but the day in which we now live no threat can be regarded as idle. And nothing can be more appalling than a cover-up of it happening. JMHO.

Meanwhile, in my backyard,I woke up and had a deer family nosing about.

A serious topic. My condolences to your community.

It seems like you got lucky with the family of deer

In your back yard. Could have gotten worse, if they had been some of those “Kevlar wearing, Assault Deer”.