Curious for the opinion of the community on this one.

Limited understanding of Oregon SD Law. However; they impaled the passenger side window nearly killing the female passenger.

Use of Deadly Physical Force
A person is not justified in using deadly physical force unless the person reasonably believes that the other person is:

A person may use deadly physical force only:

It seems that the police in Oregon are not allowed to protect the public from attack even in the event of clear danger of physical harm by a mob. This lesson needs to be a wake-up call to the rest of the nation that the liberal rulers do not want our citizens to be independent and safe. The party of lies and broken promises is trying to lead us down the path of Venezuela , Brazil and several European countries led by the one government United Nations dictators.

According to this article, ANTIFA was protesting a pro-veteran rally. They had sprayed the man with pepper spray before he got out of his truck, pulled out his firearm and shouted “Get away from me!” Salem police detained and disarmed the man but did not arrest him.

Disgusting. The police did not prevent nor stop these assaults by Antifa.

Antifa impaled the red truck with a large tree branch during their mob attack on the vehicle outside the Oregon state capitol. There was a female passenger in the vehicle at the time who was nearly killed. 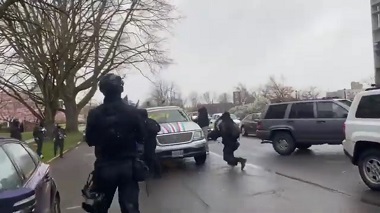 A Deeper Look at an Antifa Attack

Victim was traveling to church

That account sickens me. It is beyond words how awful this is.

I note in his account that there were police present, but they did nothing to stop the attacks on the man until he drew his firearm. Only then did police step in to make sure no one was shot. The rioters had already committed numerous instances of assault and were actively damaging his vehicle; the police should have intervened then but did not.

It’s as we keep saying, no one is responsible for your safety except you.

couple of Devil’s advocate type of questions for you all:

Answer 1) I go everywhere with a gun (so that takes care of that question. But the Pro freedom announced itself first and then Antifah decided to counter that rally. If I remember my Civics correctly we are guaranteed to be allowed to peacefully assemble and ask for redress from our elected representatives. Antifah was the ones who decided to start an unlawful assembly.

So are we supposed to cower in fear anytime I wish to peacefully assembly and Antifah decided to come show their true colors yet again. I refuse to cower.

Answer 2) That is actually what the police did. They disarmed him, took him to the police station and released him. Stating that he was acting according to that states rules for self defense.

Answer 3) I EDC a Glock, with one in the chamber. Ive stated my feelings many time. Are you going to try and put a seatbelt on in the moments before a wreck?