I have to inquire , In America ammunition and reloading components are in short supply. The normal excuse is all the new members of the gun community. I have to say though this rings hollow in certain ways.

I was recently doing searches for small pistol primers. No one seemed to have any for sale ( almost). The qualifier seems to be none for sale here( in the us).
An example would be bullseye north which has so primers but says when going to purchase we do not sell to the USA( put it in your cart and start the checkout).

Now there may be many reasons for this but they are not the only seller who has primers-- but cannot deliver to the US.

The issue is not US delivery,but that others have massive quantities of primers.

Unless you are in the US, additionally first time gun purchasers are usually years away from reloading,and reloading components.

While post ran awhile ago about shortages of ammunition or cartridges.

This question is about component parts ,and a contrived( due to intentional, perceived,or unintentional economic or political scenarios) vs the buying is so heavy for so long that no one nation wide can make enough product for a limited class of users?

Is this a sneaky assault on the 2nd ammendment?

Is this another sneaky assault on citizens rights ?

Is this just a “material” shortage and why( presuming the reloading world did not add untold millions to their ranks overnight?)

I have a friend who retired a few years ago from the Marines after a 20-year career. He now works for “some company doing some stuff” that he can’t talk about in any detail. His analysis is that, while ammunition is “manufactured” in the US, it is more assembled than manufactured. The components (brass, lead, etc.) come largely from China. China doesn’t like the tariffs imposed by Trump.

Will Biden reverse the China tariffs? If he does, will ammo availability improve? I don’t even have a guess.

I have to say that makes me nervous. I’ve worked a lot with brass, and the alloys coming out of China are very sub-par. Ammunition manufacturers could control that, of course, but it’s not just the labor that’s cheaper in China. The metals I’ve worked with from China simply don’t withstand normal pressures and heat.

Maybe I just haven’t been paying attention, but I would pass on casings that came from China, just based on what I’ve seen.

Last year was a perfect storm if you will. The COVID shutdowns, protests, a huge increase in new firearm owners, and an incoming President who isn’t the most firearms friendly all played into it.

The police and military probably stocked up due to the civil unrest. Some states were shut down for more than a month and now are only letting companies work at partial capacity, so production isn’t at 100%.

Look at how long it took for cleaning supplies to get almost back to normal. And if anyone breaths a word of a shutdown, the cleaning supply aisles are empty again within hours.

Not fully buying the perfect storm scenario. Military and most PDs requisition supplies far in advance and drudging through the bureaucratic paper pile to suddenly have a sign off on a huge increase in spending seems unlikely. JMO but I will admit panic buying by the wealthy among us doesn’t help.

There are non-military, non-law enforcement agencies buying tons of ammo esp, 9mm and 223 right now… the EPA, Dept of Education, IRS. Obozo started this concept years ago with the .22 shortage. Therefore I say contrived, but not my mfg, but Uncle Ivan. Its the government’s way of neutralizing the 2A and our congress is clueless.

One thing we know, it wasn’t the insurrectionists buying all the ammo. They apparently spent all their money on Viking outfits. Lesson learned: you need more than NFL Fan costumes to win a revolution.

There is no shortage of ammo, there is an overabundance of new shooters/gun owners, a LOT of folks hoarding and a HUGE NUMBER of folks buying at ridiculous prices so they can resell at a profit to take advantage of the situation. This too shall pass…

There are various aspects of the shortage… that is just one.

His analysis is that, while ammunition is “manufactured” in the US, it is more assembled than manufactured. The components (brass, lead, etc.) come largely from China. China doesn’t like the tariffs imposed by Trump.

^^^^^^^ This…sort of. The Chinese CAN’T import this stuff to the US due to Trump Admin regulations. They probably would if they could. And they probably ARE…if the price is right and you can keep a secret. I shot ammo at the range provided by a sponsor last Friday. It stunk like an open sewer and I did not recognize the brand. It all went bang, but these are strong indicators of ammo from Turkey or the former Soviet bloc. THEY can still import to the US. China can’t.

The Chicoms are the weirdest commies. They will do ANYTHING for a $! And they would have benefitted from high availability of cheap ammo on American streets until yesterday. So it was a win-win for them to sell ammo components and ammo in the US until The Big Guy was inaugurated.

This topic has come up several times. Everything I’ve seen from anyone who seems to have a credible connection to any of the supply chain says its flat out supply & demand.

Unprecedented demand from existing gun owners who bought “more” at the beginning of the COVID pandemic and just never stopped.

Unprecedented demand from NEW gun owners. Estimates say over 8M new buyers in 2020. If each new gun owner just bought 5 boxes (250rounds) that is TWO BILLION rounds of ammo over and above any normal demand in any given year. And we all know 5 boxes really ain’t that much.

Add to that people who may not normally buy but they bought now because they worry they might not be able to get it later. This includes agencies with contracts, LEO, hoarders, etc. Military ammo supply has no relation to commercial except in the previous occurrences of contract overruns that would go from the MIL pool into the civilian pool, MIL has their own supply chain.

Add slowdowns in the entire supply chain due to COVID. Raw materials, shipping, reduced staffing to keep social distancing rules, etc all contribute to slowing down production so even though some of the manufacturers are running extra shifts (I’ve heard some are running 24/7) its not enough to keep up with demand.

Well, I think we have pretty well defined the over all “why” we have a ongoing shortage. @Harvey summed it up pretty well.

Next question… Is there anything we can really do about it? If not are we just crying over spilled milk or just beating a dead horse.

There are various aspects of the shortage… that is just one.

My point is that there is plenty of ammo out there. I can go on Gunbroker right now and buy 10,000 rounds of anything I need (thou I really need nothing). It’s all a matter of price. I have actually been selling off my primer supply trying to keep other’s shooting and using the money to invest into training tools and materials. I want to keep cranking out new gun owners as fast as I can! Right now I’m personally certifying 20-25 every Sunday, and growing, with a 12 week backlog. I hope every instructor here is doing the same. I figure I’ll get a Sunday off to get back to Church when this is all over, and over it will be someday.

Big picture? Logistics chains are webs, not chains. They are more complex than a lot of us realize, and that makes them fragile. Write this down: the more complex a system is, the more fragile it is. Direct correlation between complexity and fragility. Think about the Butterfly Effect in a destructive sense.

I agree with Harvey AND blame disruptions to the supply chain for compounding the problem. Small hand gun primers are the proverbial Canary in the Coal Mine.

Here’s a level-headed article on the topic from some folks who do pretty good work. While they spend most of the article on the demand side of the issue, they mention the supply side problems wrought by the responses to the pandemic. They fail to mention that ALL firearms and ammo component producers in China have a direct relationship with the People’s Liberation Army and the Communist Party of China, as national defense infrastructure. The Trump Admin banned US companies from doing business with companies with ties to the PLA (due to things they do systematically like genocide, mass detention of ethnic and religious populations, organ harvesting, and other crimes against humanity). That has tossed a wrench into the supply chain for things like powder, primers, brass, copper at a time when Americans are frantically purchasing guns and ammunition due to a significant lack of domestic tranquility and obvious failures of governance under stress. Most Americans have lost faith in America, and that makes folks want more guns and ammo.

A few FFL dealers and range owners have told me directly that the MAIN changes they saw were:

Just in time logistics is how our country runs. It’s “lean” and “efficient.” It’s also EXTREMELY FRAGILE. When you increase demand 400% in 1 year, you will have horrific and long shortages and skyrocketing prices…for anything. You add the national security and geopolitical issue I explained to that mix, and you added YEARS, not weeks or months, to the shortage. 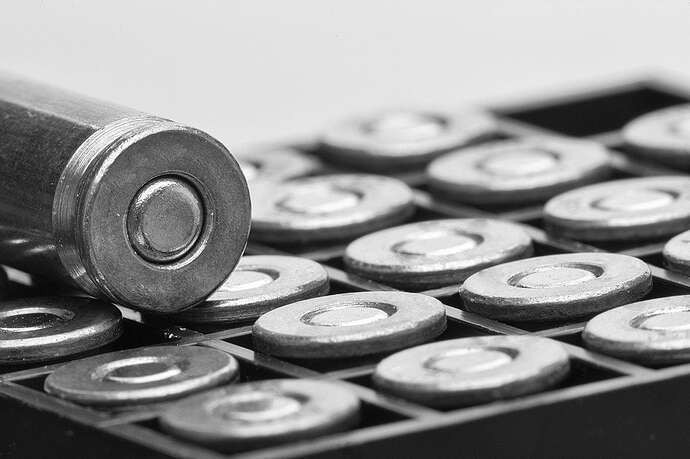 Ammo Shortage in the U.S.: Why It Happened, and How Long It Will Last

Are we in the midst of an ammunition shortage, or an unprecidented buying frenzy with no end in sight? Let's look at what we know.

I am a programmer and did this for a living for 40 years. I worked on many highly complex systems and I can say with authority that there is no correlation between complexity and robustness. In fact, most systems can be made more robust by adding complexity.

The problems we are seeing now are not a function of complexity.

You’re just wrong…in 2 ways. First, the opposite of fragile isn’t robust. It’s resilient. Programmers learn almost nothing about real life from their jobs. But thanks for trying. FYI, I was programming computers in machine code in the 1970s before I hit puberty. My father was William L Morrow, Jr, the principal architect of the Houston Port Terminal Railroad Association network. I worked in high level cryptology for Uncle Sam. I had plenty of programmers who worked for me in those days. After that, I designed and ran several of the most significant outdoor recreation websites in the world in the 1990s. Like I said, you’re just wrong. But don’t worry, you aren’t the first programmer who was wrong.

Well, isn’t this fun, debating the relative meaning of resilient and robust.

I could list my resume too but would rather not. I could list my father’s resume but it is hard to see how that applies to our discussion. I can work across the boundaries of a number of disciplines. Being a programmer doesn’t prevent that. I am not a programmer only. I am also a minister, a writer, and a musician.

Cool! Sound like a really neat guy. Seriously. But you are still wrong about the correlation between complexity and fragility.