This is how it happened today 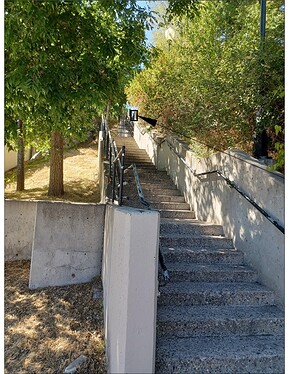 SOooo. I’m walking up by the Utah State Capitol. Part of my walk takes me up these stairs (I took this picture to show Wanda some of the stairs I climb). (I didn’t see the guy up there until I looked real close at this picture) . When I got to the first landing I see 2 rather ragged looking guys sitting on the steps As I approach one of them he says “What the Duck you taking pictures of!?!?”
My response “What the Duck is it to you what I’m taking pictures of?”
His buddy stands up and says “What’s up!?!?”
The first guy says “You’ll know what the Duck when I turn you into the FBI.”

By now I’m stepping past them on the stairs.

Guy one jumps up and says “I’m taking you to the FBI” and steps towards me.
I put my fingers under my tee shirt to make sure I was clear to draw, I didn’t expose, Brandish, anything, just making sure nothing was tangled up.

As he reached towards me I say “You better sit the Duck down MDucker!”
I think his buddy recognized that I placed my hand in a position that “Could” be important. he says “OK man, just forget it” and they both sit back down on the steps.

What is up with today? It’s not a full moon, not even close?
I had a guy accost me because I parked next to him. He was genuinely upset. I still don’t understand it.

So why were your two new buddies freaking out about the FBI? That seems like an odd thing to say. Were they on drugs?

Yea, I imagine so, lot lot lot of Fentanyl around here these days.

I had a guy in Walmart cursing me out because I was wearing a “Dad Joke Champ” shirt, but would not tell him a joke when he asked. I was on a Facetime call with my wife, to be sure I got the right items.

I could tell that was one of the college students, so I didn’t really react, but I explained to him that I am not one of the little kids in the area and let him know he needs to be more cautious of how he talked to people. I didn’t say it in a threatening way, or to make it seem like I am tough, but he may say that to the wrong person and get seriously hurt.

@Mike164 Glad it ended with your last COMMAND and the two AGREED to SIT back down. The idiots probably realized not only where hand was BUT that’s a LOOONG WAAAY DOOWN STAIRS!

Yes, you and your toxic masculinity… or else it was your “big *ick energy”.

too much for him to handle…

The first time they approached you about taking pictures, not sure how I would respond.
That’s why I try to avoid encounters with crazy people.

Guy one jumps up …As he reached towards me

Was he 21 feet away? I’m trying to picture how safe you were.

That’s about 100 steps so he was a good 150 feet away. I didn’t see/recognize that there were people up there until I got to the first landing.
When he reached for me he was 5-6 steps below me so probably not 21 feet.

At your homestead, instead of motherduckers, I’d imagine it’s “pork off,motherclucker”

Got some owls been freaking me out…spooky.

Nicely handled, and cudos to the two young men for being observant of where potential vic’s hands are. They will go far.

I am hesitant if dialog is appropriate under the circumstances, or if I should say nothing to characters and just watch them, or maybe remark on great weather. If they are mental, words will make them more mental. If they have a purpose, words are nothing, but hand signals, as in this case, are everything.

You probably parked where he needed his drug dealer to park. Or his “best friend’s” wife.

Ha ha. I haven’t given him much thought, but I assume he’s just a guy having a bad day. I had my kids with me, so I probably looked like an easy target for someone that needed to kick a dog with no repercussions.

I am hesitant if dialog is appropriate under the circumstances, or if I should say nothing to characters and just watch them

Very wise behavior. Say nothing and be vigilant.

Salt lake City has changed, violence wise, in the almost 3 years that my wife and I have lived in Utah. I don’t like cities but because of our criminal District Attorney (quick release of violent criminals) and our Salt Lake County Sheriff, Rosie Rivera, violent crime has exploded.
My wife and I are actively campaigning for Danielle Ahn, a Constitutional Law and Order (Lock em Up) Patriot running for Salt Lake County District Attorney.
We have befriended Nick Roberts, a long term Salt Lake County Law Enforcement Officer who is disgusted with the rise in our Counties crime so He is running to replace Rosie Rivera as County Sheriff.
We never thought we would need to get involved in Utah Politics after escaping from Leftist “Commiefornia” but the George Soros funded corrupted scum are quickly changing Utah into LA, SF, NY, CH & PA!!
If you love our American Constitutional Republic, you Must go Vote this Nov 8, 2022 and take your family and encourage your neighbors and friends to vote as well. Mike Lee and Burgess must be re elected to take back the Senate and the Congress in DC as well or else we’re all screwed! If the Republicans fail to get elected you can say goodby to our 2ND Amendment!!

Yes, Yes and Yes. Nice to see a Cali import that isn’t a far left zealot. Welcome to Utah my friend.

@Mike164 Jeez. A lot can happen in 30 seconds…
There is a .25 mile path near a lake where I live. I was walking it back and forth to get a couple miles in when I first moved here. Its very pretty, lake on one side, woods down a hill on the other side. At the end of the path is an old dam used in the past to run energy for the old textile mill nearby (now converted to condos). One day I was walking my path, some people were swimming, sun bathing etc. I walk past a group of men to my right standing in a circle doing ? not sure? Seemed ritualistic. to my left were women and children, I think connected to the men. I noticed but thought nothing of it. I walked down to the dam and turned around to complete the loop. As I headed back, the group of men were coming down the path splayed out across the path, in a threatening way. Most people walked to the side and we nod or acknowledge each other as we pass by…innocent walkers. But these guys were purposefully walking toward me. I knew I didnt want to go back to the dam…dead end. And I didnt want to go into the woods even on the trail because it was too secluded. So I walked straight toward them with confidence (on the outside, shaking on the inside), made eye contact with the presumed leader who was deciding if I saw what they were doing in their circle (??). I smiled and walked through them and kept on walking.

No altercation. But here’s the thing…this state is making me jump through a hundred hoops to get my LTC so I did not have my gun. I didnt have mace at the time (I do now). it was me, my cell phone, and my keys. Not good. It could have been worse. I think my confidence helped me out of that one but I had no choice. I walked may bad a** through them, a gang I presume.

I called the police that week to find out their procedure for the LTC and told them why I wanted one. The cop asked why I didnt call them when it happened. Well, nothing happened technically. They didnt do anything illegal. I just didnt feel safe. Since then I notice cops sit in the parking lot more often.

I made some mistakes for sure but it worked out. I swear I have angels watching over me…

Great job being prepared and deescalating a situation before it got ugly.