The Power of Suggestion - What the Eye Sees

So I open up this article: 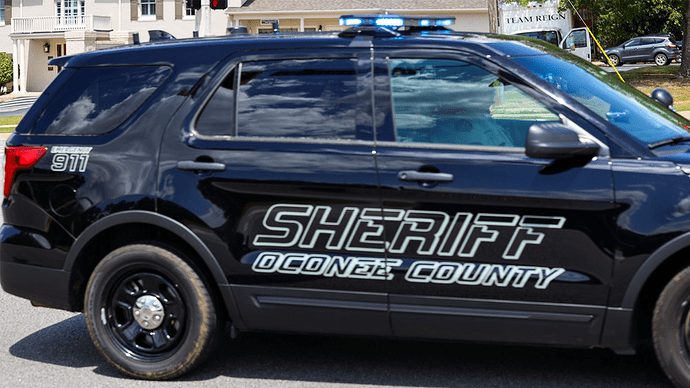 A staff member at a Georgia primary school was arrested and fired after she left her purse with a gun in it on school property. She was not a teaching staff member.

And what is the first thing I see? Donald Trump. 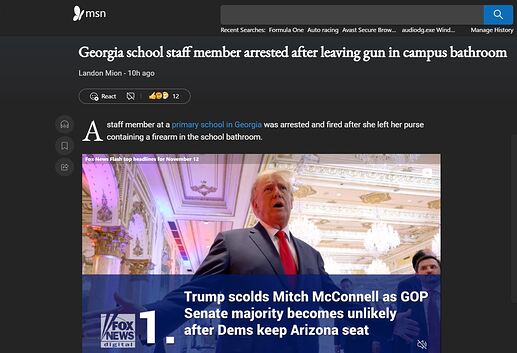 My wife studied psychology and worked in that business for a long time. It’s a well used tactic to influence people with “First Sight” effects. Pictures on walls, fish tanks, wall colors, end panels at stores. It’s actually pretty effective. So I see a headline about a gun, click on the link and before I read a single word I see The Donald. Is it possible that the media are trying to influence the unknowing citizen?

In what way, is the question here? I’d be scratching my head, as I am now. Because what I see and read are dueling narratives and mis-messaging. In other words, what I see “in a flash” and what I read does not quantify. By accident, design, or nefariously intended, it totally blows.

Edit: To demonstrate what I mean while not being critical at all; I just visited another topic on “this board” that captioned the Celebration of Marine Corps Birthday. That’s cool, which suggests that any commentary would be on that point, and any graphics would be commensurate with the Headline, By-line, caption, or subject matter. Instead, what I see is graphic of a box of Crayons. Go figure? So, it would seem that I’m a little dim, or there’s some privileged commentary that I am not privy of. So, until I have been read in, I draw a blank about the whole attempt of the post, which makes me more apt to move on without attaching any regard for what was displayed. Maybe I shouldn’t do this, but I don’t have anything else to consider.

Don’t over think it my friend.

In the press afflicted by TDS (Trump Derangement Syndrome) most imagery and conversations will be around the same subject.
Human brains however, are remarkable at tuning out the noise.

It’s an inside joke

@Mike164, let me clarify. I was speaking in support of your statement; meaning, their juxtaposition doesn’t quantify. Except it being mistake, it could point to some other intended messaging. I just can’t figure out what exactly.

Rarely never said to their face.

Crayon eater is a derogatory term relating to low intelligence. Dog faces use it to feel superior to Marines. How ever the Jar heads embraced the term and laugh it off. For the other services it’s like like the N word. They get a perverse thrill mocking true warriors. I mean who wouldn’t want to be in one of the big services as they display their identity crisis through constant wardrobe changes. Marines remain the few, the proud concerned more with the men and women in the uniforms. I have 2 friends that are Navy veterans that talk of their time in the service. As a Marine veteran, I was in the military. Do you understand the distinction? I’ll close now with a Semper Gumby. And let the other service representatives tell you how brilliant they are.

Children in kindergarten are commonly given crayons to color drawings with. If they can color within the lines they are sometimes rewarded with a gold star next to their names. Some of the children… the not so smart ones … will occasionally try to eat the crayons.

“Developmentally challenged” individuals will sometimes eat the pretty crayons to, but I will not sully the good name of the Marine Corpse by implying they ain’t smart. 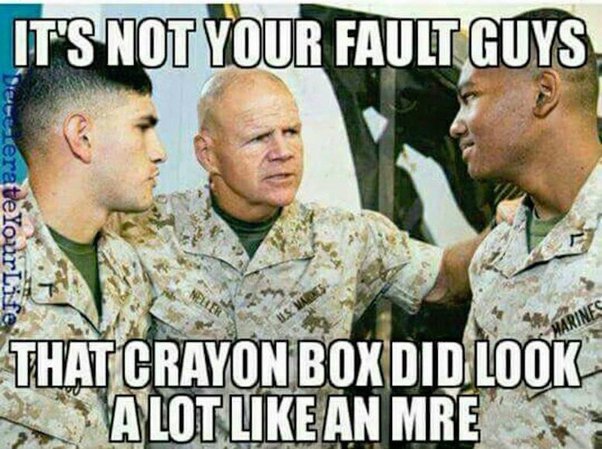 Maybe I was a little quick on the key board.

I know people that are easily influenced by these kinds of subtle, on purpose techniques.
Have you ever been across the desk from a “Sales Force” of 2 people? Watch very closely, see if one of them is mirroring you, hand placement, breathing patterns, eye blinks, foot movement… It’s all along the same line, plant ideas subliminally, draw your “client” in with subtle suggestions. Police interrogators are experts at these things and it appears, the main stream digital media are pretty good at it as well.

For those who may ask the next obvious question. 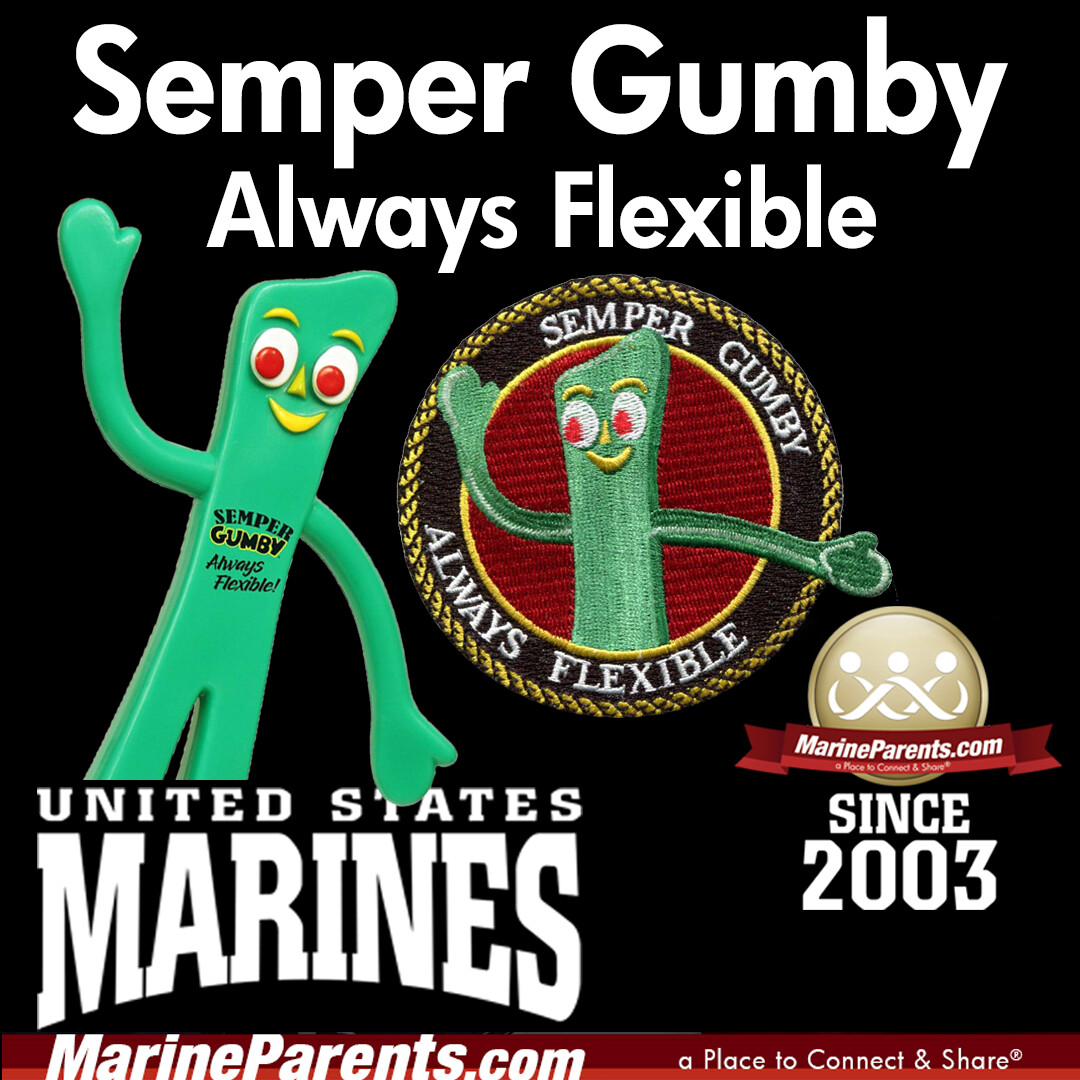 Gumby, as an original toy and character of a television story, was created by Art Clokey. The design is copyright to the Clokey family who has granted permission for Marine Parents to use the image in “Semper Gumby” products and T-shirts. To shop for Semper Gumby, visit our Eagle, Globe, and Anchor Shop, The EGA Shop. Our Semper Gumby is an officially licensed product.

was created by Art Clokey

Unfortunately, Mike, it’s not foreign to me at all. I’ve had some similar experiences.

But as it pertains, there are those organizations that spend big money to ingratiate themselves with a populace by employing tactics that are perceptibly familiar that seeks to win the hearts and minds of a people (in my opinion should not be employed on our citizenry), because at the very earnest it seeks to deceive through sound, voice, and imagery. But oh, what a wicked web we weave when we first practice to deceive. A lot of them now are being put on the carpet, and others are pursuing new career paths, and then some…have received a new permanent address that is managed by the state, federal, or civilian agencies. They may get by, but they don’t get away.

Not many of us regard things cerebrally, Mike. Not that I’m trying to take my tin foil hat out of the closet, but that’s how we miss it, as you’ve mentioned. We don’t examine what we rest eyes on or apply our hearing to. I have learned to cruise by what makes absolutely no sense.

How many times will you watch the TV commercials where the verbiage doesn’t match the imagery? How many times will you watch the Dog family driving mini vans, before you go down to the dealership and pick you out one? Or medicines that are advertised as the latest and greatest but also tells you real fast that it may kill you, but don’t worry about it, get yours today! Only to later be made aware of the class action suit which says, “Call Us Today at 1-800-D**-FOOL.”

It’s an inside joke

What he said. If you aren’t a Marine or served in a Marine unit. Or know someone who was 1of the 2.

BTW there is no such thing as a (former) Marine. Once a Marine always a Marine. In the Marine Corps there are Marines, non Marines, and Marine adjacent. Marine Adjacent are those from other services that have served in Marine Units.

Myself, I am Marine Adjacent.

To me it is about discipline. I don’t know what it means to be a marine. I imagine it means something different to all marines. Thanks for your service.
To get back to the OP’s post, I agree politicians will use any means of get votes. Emotions, subliminal messages, what ever gets them elected because if they don’t get elected they can’t bring peace on earth.
In my reality it is up to each individual to bring peace on earth. Kumbaya my lord.

So they first thing they did was search her purse?
I guess that’s not abnormal. It’s like unattended baggage: have to make sure it’s safe, try to identify who it belongs to, etc. It just caught me off guard; I learned as a child to never, ever, ever look in a woman’s purse.