I just read about this on Facebook and I would say the same exact thing said here that was said there.

“Good Luck! Please show me the lawyer that took on this case. They must not have ever read the Constitution or the former SCOTUS ruling(s) on this same type of lawsuit.”

The lawsuit says the Madison, North Carolina-based company should never have sold a weapon as dangerous as the Bushmaster AR-15-style rifle to the public.

So when are they going to sue alcohol brewers for people drunk driving? Or car manufacturers for making cars that can break the speed limit? 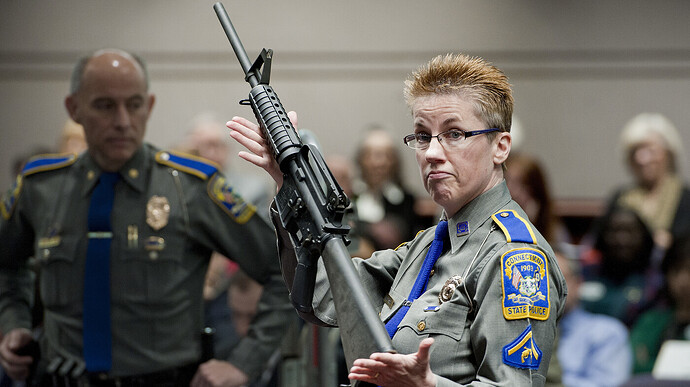 The gun-maker had appealed to the highest federal court after the Connecticut Supreme Court allowed the lawsuit over the 2012 school massacre in Newtown, Conn., to go forward in March.

Sandy Hook was a great, great tragedy, period. Me being a single father, I don’t even begin to know how those families of the babies feel/felt.

That being said, I don’t know how in the world you can sue the gun maker??? And the Supreme Court would not even HEAR THE APPEAL… How can this be? The right in any court case is the right of the plaintiff AND the defendant to both have their say and their defense. You have to hear both sides in order to make a fair and just decision. This flabbergasted me when I just read it… If us 2nd Amendment advocates were ever in a more trying time, I don’t know, in my lifetime, when that was.

Man we all lost today.

This move could be detrimental to firearms manufacturing. Next up ammunition. This definitely undermines the 2A.

Or was this specific to gun companies only? At this point it’s a win for attorney’s (Bloomberg I’m sure will foot that bill), I guess we’ll have to wait and see what the final ruling is now that the trial can go forward (or if Remington settles).

This is a ridiculous case, how can you blame the makers of an inanimate object? Like @Dawn said we need to sue car manufacturers for drunk drivers, the silverware makers for making people fat, and last but not least cleaning solvent makers for causing slip and falls.

So when are they going to sue alcohol brewers for people drunk driving?

Hey, lets not stop there now!!

Since we are at it, we must sue any company producing, mind-altering, cancerous causing, a motor vehicle of every kind but not limited to motor vehicles but ATV’S and Boats pushing us to ban sharp objects, oh wait… its not a chemical, product producing, manufacturing, fire-arm companies of any sort causing deaths, of company, but its a people problem.

So who is the one we must go after?
Well, he was God’s most favored Arch Angel…his name is Lucifer, Satan, the Devil, Father of all lies and the accuser of the brethren (us). That is who we must sue, oh yeah that case has been DISMISSED Judge ruled inHuman Kinds favor!

**A good advocate to know is Jesus! Pick up the phone now, “One call That’s ALL!” You will hear how they needed salvation and thus eternal life was rendered.

Paid for by the Christ Came to Save you Association! He has billons of clients who he represents all around the globe, find one near you…today!

This IS utter crap, they’re trying to sue all firearm manufacturers out of business

Disclaimer: I am not a lawyer (I seem to be writing that a lot lately).

From the article (emphasis mine)…

It also alleges Remington targeted younger, at-risk males in marketing and product placement in violent video games
…
“We are ready to resume discovery and proceed towards trial in order to shed light on Remington’s profit-driven strategy to expand the AR-15 market and court high-risk users at the expense of Americans’ safety,” [Joshua Koskoff, a lawyer for the Sandy Hook families] said.

My very limited understanding is that part of the reason this is allowed to proceed is that the plaintiffs are arguing about the marketing of the product. What most people are thinking of (including Remington in their defense and asking for the case to be thrown out) is the Protection of Lawful Commerce in Arms Act (PLCAA) which basically says “if it’s legal to own, you can’t sue me for selling it”. So what these crafty anti-gunners have done is found a loophole (like the gun-show loophole, only it’s real this time) where they can side-step the PLCAA by suing them for something else besides selling “dangerous items”. And what they are attempting to do is say “Remington made these young, pliable, naive young men think they were badasses and made them want to go shoot up a school through their marketing”.

From one of the briefs submitted to the Supreme Court:

Respondents, who are plaintiffs below, allege that petitioners violated the Connecticut Unfair Trade Practices Act (CUTPA) when they knowingly marketed and promoted the Bushmaster XM15-E2S rifle for use in assaults against human beings. Respondents allege that the illegal marketing proximately caused their injuries, which arise from the terror, pain and suffering, and death of the victims of the Sandy Hook Elementary School shooting.

The Protection of Lawful Commerce in Arms Act preempts certain civil actions against manufacturers and sellers of firearms and ammunition. But it expressly does not prohibit “action[s] in which a manufacturer or seller of a [firearm] knowingly violated a State or Federal statute applicable to the sale or marketing of the product.” …

(list of all the docs around the case, for those who like reading legalese)
The other aspects of the case around “it’s too dangerous” and anything else related exactly to the selling of the firearms will get chucked out the window during trial. However, I’ve never seen Remington’s marketing and I don’t know how likely it is that they can convince a judge/jury that it is responsible for enticing an “at risk youth” to go commit a bunch of murders.

Regardless if it succeeds, you can expect a torrent of similar lawsuits all based around marketing. No one would be safe. Firearms, ammo, accessories, parts manufacturers… video games… basically anytime someone stands there with a firearm in an inspiring pose. I wonder if they’d go after movies, since the movie industry is lefty, but films like John Wick, American Sniper, etc seem like prime targets.

They’ve found a way to sue that doesn’t get immediately thrown out of court. They can entangle the gun industry at large in tons of frivolous lawsuits even if they eventually lose they won’t care. The anti-gunners have deeeeeeep pockets. Bloomberg alone could sink pretty much every manufacturer by himself in the legal fees they’d spend in protracted lawsuits.

I wonder how Roberts voted?

There was no vote. They refused to take the case which let the lower court ruling stand.

@Dawn I guess I can call my lawyer and file the two lawsuits against both of my automobile company. When I was driving down the road, I got a speeding ticket. Therefore, I blame the auto maker for this “flaw”. I know…I know… This is outrageous and simply hilarious. I am ashame of our SCOTUS for even wasting the tax payers money on this lawsuit. The litigation team stands to make a lot of money on this lawsuit (hundreds of thousand of hours working and filing appeals, etc.).

Your kid gets enamoured in games like “Fast and Furious” decides to go steal a sports car, gets in a high speed chase, maims several people and kills at least one. What do you do? Sue the game producer.

Your kid listens to gangster rap, decides a life of drug dealing and violence is for him/her so when they finally get in that shootout and kill a cop what do you do? Well, sue the rapper of course!

You are a completely irresponisible parent and buy your 16yo the latest 600-700hp road monster from XYZ car company. Kid decides to go weaving through midday traffic on “the loop” at 160mph eventually killing themselves and maiming, killing several others, what do you do? No problem sue the car manufacturer!

Now since this case revolves primarily around how the Bushmaster was advertised, let’s go after the ad companies as well. We’ll sue them into bankruptcy because yes, your ass actually looks big in that skirt, and no, that cologne doesn’t really turn a 300lbs basement dwelling neck bearded troll into the sexiest man alive!

The anti gun crowd was ecstatic over this decision of course but how many of them considered even for a moment the possible future ramifications?

Indeed.
If the court says a manufacturer may be sued and held liable for the actions of an individual, that would mean all automobile crashes regardless of cause, speeding, drunk driving, negligence, texting, … are the fault of the automobile manufacturer.
It would also mean that bat manufacturers are liable for injuries caused by individuals who use a bat to attack another.

The court has declared that an individual is not responsible for their actions, the item or tool they use is.

You sue the game manufacturer, the game programmer and coder, and the manufacturer of the car… but you dare not consider holding the kid responsible for their actions.

Why not sue them all, for their advertising…

Indeed, and they should start with the automobile manufacturers, and the auto unions… they make and market vehicles that can exceed the speed limit, which automatically puts them in the category of violating the law, and through advertising they show vehicles racing and doing doughnuts, and making high speed passes and other unsafe and dangerous maneuvers, all the car companies should be sued, based on this very case precedent.

The lawsuit is on how the Bushmaster rifle was marketed. Car manufacturers HAVE been sued on this premise before. That’s why the car commercials say “Professional Driver, on a closed course” at the bottom. I agree the whole thing is exploiting a loophole in a law. It will be interesting to see how the suit actually goes. It’s just the anti-2A forces way of making inanimate objects look like a problem.

I think that is one of the scariest things I’ve ever read, @Kevin29.