...diagnosis and treatment of mental illness could have "decreased violence"...

@KillJoy Poppycock on what? The study? The results? Seriously, I’d like to understand why; please elaborate.

Psych told me years ago, don’t try to understand crazy.

If you understood why a person went batshat, you’d be crazy, too.

Yet every nut gets a week of 24 hour news coverage with morons trying to understand his motivation.

According to the American Psychiatric Association:

Mental illness is common. In a given year… nearly one in five (19 percent) U.S. adults experience some form of mental illness…

Seems like a rather broad brush to associate a given occurrence. I was once told by a Sociology professor that 60% of people could be diagnosed with a mental disorder. As an example, he mentioned people that wash their hands a little too much might be showing signs of obsessive behavior.

I’m willing to bet, that even more mass shooters wear underwear. I think an investigation into Hanes and Fruit of the Loom is in order.

On a more serious note, I do believe that we need better, and more successful treatment for people with mental illnesses. Additionally, I support research that aims to do this.

Agree with @Scotty that we need much better treatment and support systems for people struggling with these issues.

@KillJoy Poppycock on what? The study? The results? Seriously, I’d like to understand why; please elaborate

The people that posted after you basically conveyed my own thoughts. Technically speaking I’m mentally ill. But I’m not homicidal. I think the report should have shown most (really all) mass shooters are homicidal. That’s not the right correlation that should be made. Those liberal socialists are trying to setup a study to support red flag law which are unconstitutional. They’ll use it to ban guns from private ownership. That’s why it’s poppycock.

Mental illnesses are health conditions involving changes in emotion, thinking or behavior (or a combination of these).

According to this definition, when my boss makes me angry, and I shout or throw something across the floor, I’m mentally ill.

It’s interesting that at the time there were three comments, there was only a single click on the link. So at least a couple were commenting without even reading the article.

The study didn’t claim, or attempt to claim that people with mental illness have a tendency to be mass shooters (or homicidal), but rather most mass shooters (of those who were alive post-incident) were diagnosed with a psychiatric disorder, 18 out of 35 with schizophrenia that included the belief that they were receiving messages from demons and seeing hallucinations ordering them to “kill, burn, or destroy.”

I don’t understand your normative statement about what the correlation should have been, nor the conclusion that this is an attempt to ban guns. I think that’s a big jump, and based upon suspicion rather than evidence. This wasn’t a pop psych article in Psychology Today; it was an appropriately dispassionate presentation of a study and results.

I’m willing to bet, that even more mass shooters wear underwear. I think an investigation into Hanes and Fruit of the Loom is in order.

This is flippantly dismissive of a serious issue.

So I’ll just ask this, what does cause a mass shooter to kill 3-4+ people? What’s the root cause behind their acts?

Mass shooters have a screw loose

? Get outta town! Who’da thunk it? Those Ivy League schools…man, they really are the tip of the educational and research spear, ain’t they? Wonder how much it cost to come up with that pearl of wisdom? Learn something new every day.

It’s interesting that at the time there were three comments, there was only a single click on the link. So at least a couple were commenting without even reading the article.

If you right-click the link, it does not show as being “clicked”.

Ah. Thanks for that. I primarily read on my phone, so I wasn’t aware of that option.

psychotic symptoms including the belief they were receiving messages from demons and seeing hallucinations ordering them to “kill, burn or destroy.”

I know some news anchors and legislators that were sending exactly this kind of message, and frankly, some of these folks could be mistaken for demons.

You could spin this study into society failing the poor ill folks, and needing more psychologists in schools etc. applications of taxpayer funds. I don’t like that. Mass shootings need to be categorized. There is nothing medically wrong about gang culture, or successful attack by enemy foreign. The remedy for that is long prison terms, police work, and strong borders.
Does society need stronger psychiatric help institutions? You bet! However, in current political climate, it is an effort that short-circuits itself. The conversation is impossible if they turn away from homeless problem, and permissive school policies.

It seems as though a lot of the high-profile mass-shooters had known mental illness. Or at the very least, they had someone asking for help on their behalf. That’s part of the story template I’ve come to expect, along with the discovery that the shooter should not have had firearms. I’m curious where that gap is, between suspected of having a psychiatric illness and being formally diagnosed with one. By the time someone snaps and kills people, it’s too late to point out the obvious behavioral issues.

Short of implementing something from the Minority Report, I dont know how to answer this question.
For instance, you have a person at work in management role, and they are snappy, high-strung, and there are rumors of that person seen smoking a substance in the parking garage at work. Dangerous, not dangerous, what say you.

I don’t know. It seems like different people have different ideas about what kinds of indicators we need to look for. The thing I hear most is always changes in behavior, which is why close friends and family play such an important role.

It’s always heartbreaking (but sadly predictable) to read the part of a mass-shooting story where the perpetrator’s family was trying to get help.

Well, the law protects people with disabilities. It’s difficult to get law enforcement involved if a law has not been broken. Families probably don’t want to commit their own for many reasons. If acknowledging ones mental illness didn’t have dire negative consequence people might be more prone to seek help. A diagnosis impacts things like Life Insurance and employment. It’s a conundrum.

If acknowledging ones mental illness didn’t have dire negative consequence people might be more prone to seek help.

Yes, that is a huge problem. We can go seek help for all kinds of physical issues and there are no lasting consequences once the wounds heal. There are even some legal protections when physical issues remain. But a simple visit to a psychiatrist or a psychologist can affect someone for years. And family members who notice the problem may not know how to get help. 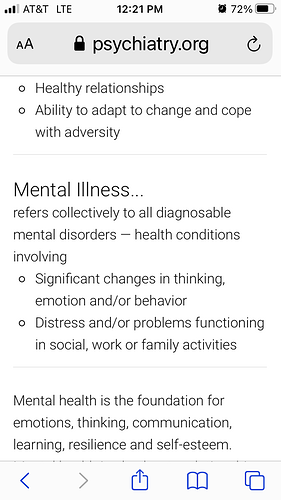 The problems with this
1.Who decides which mental illnesses are “dangerous?”
2.Those same decision makers have politicized illness

Remember when Obama wanted to use mental illness diagnosis to dictate gun confiscation? The way the bills he wanted passed were worded, your grandparents that have a hard time managing money, would have been denied rights. And to be fair, Trumps support of red flag laws was in the same ball park. If you are involuntarily admitted into a mental institution, you will be stripped of your 2A protected rights.

IMO, you come across as having a chip on your shoulder. I hope you either work or volunteer for an agency that helps or works with those in need. If not, I’m sure there are plenty of institutions that exist in your area. Hands on experience rather than pointing out articles or calling out dark humor might soften your edges. Or maybe you give latitude to those around you because you “know them,” and want to point fingers at people you don’t know that make similar comments out in the ether.

I’ll also add, depending on your phone browser, you can hold down on the link, and it will ask if you want to open the link in a new tab. This is similar to right clicking on the computer.

So I’ll just ask this, what does cause a mass shooter to kill 3-4+ people? What’s the root cause behind their acts?

Obviously you read but didn’t “read” the article. You said yourself that 18/35 had:

the belief that they were receiving messages from demons and seeing hallucinations ordering them to “kill, burn, or destroy

This is a very clear and precise description of a symptom that, according to the article and related study, seems like a good place to start. Is this something that deserves your attention or are you asking what causes mass shootings while ignoring your words quoting the article you linked.

Linking this to mass shooting, as the title does, is a cop out. If the same person is/was abusive to people, abusive to self, abusive to animals, etc. then focusing on mass shooting is flippantly dismissive of the underlying problem and the harm that is caused to that individual and those around them everyday.

Just as important, titling an article as such can create prejudice and fear of those with mental illnesses. This can further push away those that would seek help, that are willing to give help, or those that might befriend, work with, live around, or just be neighborly to someone that might be showing signs of mental illness.

Exactly what is your purpose with this discussion?