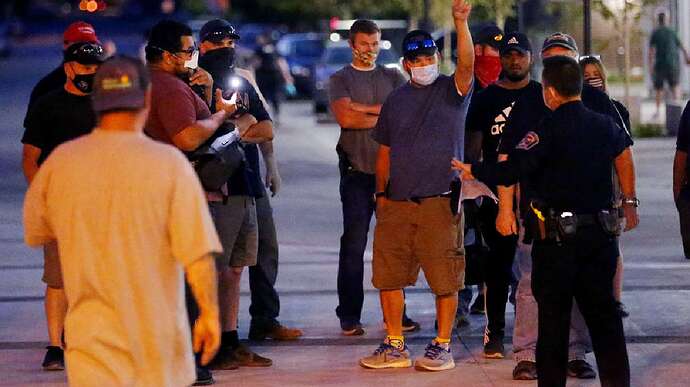 Man charged with pepper spraying protesters did not act in self-defense, Utah...

A Utah judge ruled Tuesday that a man charged with deploying a stun gun and pepper spraying Black Lives Matter protesters in 2020 was not acting in self-defense.

Schroerluck at one point said, “Let’s have fun with this, I haven’t tried it yet,”

What he did doesn’t sound like clear cut self defense either. But that’s a strange thing to say for someone who is supposedly in fear of being harmed.

Ignorance of the law is no excuse whether he was right or wrong if the judge says he broke the law he was found guilty. We can’t know all the laws but if we use a weapon we should know the laws governing that weapon.

Well not found guilty, Yet. This is a new piece of Utah law where it goes to a hearing:

"In such hearings, the decision about whether someone acted in self-defense shifts from a jury to a judge.

If the judge decides that the actions were in self-defense, prosecutors must prove with “clear and convincing evidence” — a high legal bar — that the person did not act in self-defense or was not justified in the use of force"

It was all part of our constitutional carry laws that passed last year.

I like the sound of this law. Could serve as an extra layer of defense against clearly over zealous prosecutors.

Didn’t help this guy though it doesn’t look like he deserves the extra protection without a lot more facts coming out in his favor at trial.

If you resist “peaceful protestors” any word and any fact of your prior life will be used against you. We get that.

Theoretically speaking, if one finds himself in the middle of an angry terror mob, that person has reasons to fear for their life, by definition.

We can’t know all the laws

That’s funny (in a different way)… An officer arrested a man in a little po-dunk county in Missouri about 2 years ago for carrying a concealed weapon… The prosecutor chose to take him to court on a felony. When they appeared before the judge- the prosecutor was severely reprimanded because Missouri had passed Constitutional Carry the year before and the man was released. The prosecutor’s response was “we can’t know all the laws”-- So one man can get convicted for not knowing the laws while someone who should know the law gets a free pass.

I just found this ironic.

Another side line here, it’s been a long time from
Black Lives Matter protest on Sept. 16, 2020,
to a court ruling on April 25, 2022.
The wheels of justice turn slow very very slow.

Third District Judge Vernice Trease… also specifically cited that Schroerluck was armed while the others were not.

It doesn’t matter in a self-defense scenario IMO.

However, the circumstances show so far that he was the agitator.

Trease said that it was obvious that people involved in the protest did not want Schroerluck there and tried to get him to move in a different direction. “It appears to me, frankly, that at some point, this is something that may arguably be viewed as mutual combat”. Trease specified that he could still present a claim of self-defense to the jury.

Nicholas Bradberry, the man says he was hit with the Taser […] was trying to get Schroerluck to move away from the protesters.

We all know how peaceful those “protesters” are. We also have seen them maliciously use pepper spray, bodily fluids, frozen bottles of water, etc., etc., against others and suffer no consequences.

So, this idiot requested a justification hearing. The decision about whether he acted in self-defense shifted from a jury to a judge. The judge ruled that he didn’t act in self defense and the case will go to a jury trial. However, she said he could still present a claim of self-defense to the jury.

I’m surprised that he can still claim self-defense to a jury, since the judge has tainted that claim with her decision. The jury will be well aware that the judge has already ruled against him and her comments were put in the article. It will be interesting to see the outcome.

To my knowledge, this is the first Utah case that the judge ruled like this. We are all watching to see how this turns out.

That a jury of peers can effectively overrule the judge sounds excellent to me.

Leaving a decision in the hands of a jury is a real crap shoot. In fact the odds are probably better at the craps table than in the jury decision room. Personally from where I sit, if the quote is accurate, the guy cooked his own goose with his mouth. “It is better to remain silent and be thought a fool than to open it and prove it.” or as the specification sheet used to say, “or words to that effect.”