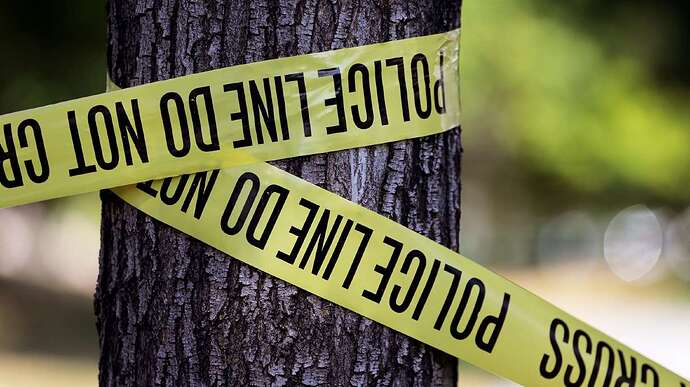 A 5-year-old boy died of an accidental self-inflicted gunshot wound on Sunday in Smithfield after finding a gun that had not been put away following a camping trip, according to police.

What in the hell is up?!?! It’s like nobody tells these folks to secure your firearm ALL OF THE TIME. Don’t leave a firearm, loaded or not, laying around anywhere, especially when little people are around or might be around. Damn!

No training? Too much comfort? Lack of thinking?
Unfortunately the innocent paid the highest price.

A sad story that can happen to anyone. It’s possible someone can get charged over this incident. We pray for that family and for the good Lord to bring them comfort.

It’s possible someone can get charged over this incident

Even not… for a true Parent, no legal consequences are needed to be punished.

Hard to imagine a worse punishment than loosing my own child due to my own negligence! Nothing you could do to me would make me feel worse.

When not being actively used for responsible purposes, firearms should either be carried securely, or stored securely. Especially if there are children around.

sad story that can happen to anyone

Sad, for sure. Happen to anyone? Doubt that. Leave a loaded weapon around because of lazyness or perhaps forgetfulness, what a horrible thing to live with.

It is a terrible story. I suspect that what you’re experiencing is seeing it covered in mainstream media, not that it is happening more. Where there’s an agenda…

Definitely agenda driven news. More kids drown in backyard pools than die from firearm accidents. But you wouldn’t know that unless maybe you watch the local news in Phoenix during the summer.

Though hopefully covering these sad stories will remind others to be vigilant and avoid these tragedies.

Spoke up enthusiastically about the responsibility of owners securing their firearms always when I first became a member of this community and one of the usual suspects here swarmed me with his minions saying something to the effect that requiring people to secure their firearms was an affront to the 2A and grotesquely un-American.

I never said anything about a requirement. But that never stops the Knee Jerks.

I do think people who are stupid enough and negligent enough to let something like this happen should go to jail for first-degree murder.

This type of incident also provides great political and PR leverage for the anti-gun crowd.

Not a single good thing comes from an incident like this.

And it will continue to happen until the pro-2A community works to change the culture of indifference that some seem to harbor when it comes to showing basic responsibility.

People are too damn preoccupied to let responsibility get in their way. Look how many times we hear of children dying in hot cars, drowning in pools and getting access to loaded weapons. They not only had a serious responsibility for securing that firearm, but they had an overwhelming responsibility for that child.

We do live in a distracted and preoccupied world @William226. And how some of these tragedies are allowed to happen is beyond me. But I think it is important for all of us to remember that none of us are perfect and we are all only one distraction or preoccupied thought away from screwing up.

Whether it is driving a car or handling a firearm, one wrong choice or action can cost innocent people’s lives.

In my experience the biggest habitual screw ups fall into two categories. Those that don’t have a clue and those with a lot of experience who think they are incapable of screwing up. I think it is important for everyone to approach every activity with the realization that we are capable of imperfection.

@Mr.Plastic , I understand your frustration especially with folks with cavalier attitudes. But I wouldn’t convict this man of first degree murder. This does not seem premeditated in any way. I do not know if this was a family of careless yahoos who left their guns sitting around all the time or devoted parents who secured their firearms every one of the other 1850+ days of this kids life and for whatever reason might have failed to properly lock the case this gun was in this one time? If they are the former I hope they are charged with manslaughter. If they are the later they will live the rest of their lives hating themselves for their one mistake.

I personally am not a fan of loaded guns that aren’t being carried or are not stored in a quick access safe. I even pull my firearms out of the quick access safes and store them in a sturdier safe when I’m away on vacation. I don’t like the idea of the wrong people getting hands on my firearms. But it is a free country and folks should be allowed to live with the consequences of their actions unless their actions are directly and repeatedly threatening the lives of others.

I always try to learn from and avoid the screw ups others have made. I may work harder than most to avoid mistakes but I am fully capable of making them even on my best days.

During several of my travels I’ve stopped at fast food rest stops on the turnpikes. At a McDonalds I watched a couple sit in a booth with a little boy. They put a happy meal in front of him and they buried their faces in their iphones. He tried to talk to them a few times and even show them something and they never once acknowledged him. They talked to each other a few times and when they left he hurriedly closed his food box to keep up with them. This type of preoccupied activity is common anymore and generations will follow these wonderful examples. There’s going to be a lot of distracted thinking coming down the pike.

Maybe the answer is an APP that will guide people through what used to be normal activity so they won’t miss any of the important steps. They will already be looking at their iphone so it won’t be a distraction. It could even include selfie steps to document the important stuff and sound an alarm until it is done. Selphie taking kid out of car, selphie securing firearm, etc, etc. I think that’s the direction we are heading anyway.

I hate seeing things like this. I think I’d want to die if my kid had done this due to my negligence when she was a child. It makes me angry as hell and grateful at the same time.

A tragedy for sure. It is not different from child left in a hot car, or a child popping a lid from medication bottle, or household chemical, or tipping a boiling pot… I don’t think you can prevent any of this with 1st degree murder charges, and it is baseless to even propose a charge like this. Guns are not special as far as accidents happen. Not unless you are with MSM and have an agenda.
Gotta watch your little kids, think ahead of what mischief they can do.

Years ago, my 5 year old son was almost the subject of one of these. He went over to play at a friends house (from daycare), and the older brother said “Want to see Dad’s gun?”
Mike had been taught what to do–he left the room and asked to call home.
We came and got him, found out what happened, and talked with the mother. She had no idea the boys knew where the gun was (unlocked revolver).
From then on, we asked all of his friends’ parents if they had unlocked firearms in their homes.

Glad you taught your son what to do and glad it all worked out. Little blessings like those are a reminder of the benefits of the path of the Righteous Man.

Thank you, sir. Eddie Eagle program from the NRA. GREAT way to teach kids how to deal with it.

Especially not that recent PSA “daddy do we have a gun”?
My answer to that is, damn right we have a gun, now let’s discuss your role and any questions you may have.

And before we go any further, this is no a toy, please don’t ever touch it no matter where you find it, call me or any responsible adult!
I see that phone permanently attached to your ear, use it!

With 100,000 percent increase in new gun owners, PSA ads should be being run by our community as a whole on all networks every 30 minutes!
It’s a question I’ve repeatedly asked myself, why doesn’t the NRA, USCCA, 2AF or any gun friendly association buy airtime just for this purpose?

This is quite rudimentary but all my kids (now adults) all my grandchildren (some young adults) all have signed and understand the ramifications of false statements. A promise is your word, now put your money where your mouth is. 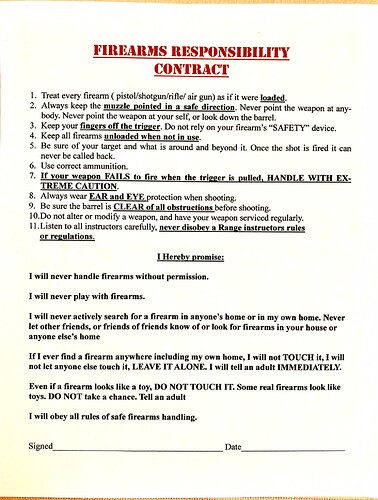 Feel free to copy this and use it.

If I were smart enough I would propose a bill to Congress. I would blow off the Supreme Court like he just did and run the ad any how.
Run the ads, save a life! I don’t see the problem with this???

I never understand how parents aren’t charged just because losing their child is “punishment enough.” I recall an incident in my area several years ago in which a woman was involved in a minor fender bender, but the driver air bag deployed and killed her toddler who was sitting in her lap. The mother was not charged. I don’t get it.

because losing their child is “punishment enough.”

… it is not this. Menthal punishment has nothing to legal consequences.
If prosecutor finds the reason to charge parents… he will do this for sure. But in most cases these are accidents not murders.