What are opinions on mounted lights on a pistol? I’ve heard some say they would only carry a separate light (I like to have two hands on my gun). Other issue, do you illuminate with the gun pointed down as to not flag any unwanted target.

Just wanted to hear some input on this.

I’d love a pistol mounted light that I could activate upon request (push of a button).
But, if you train with one your muscle memory may train to always turn it on when you don’t want too.

One of my EDC has a Varidian light system on it, it automatically comes on, or the laser comes on, or both, upon drawing from holster. That is nice, but once again what if I don’t want to expose myself.

I think Crimson Trace makes a light and some others but I could never find a holster that would accommodate them. So, it’s back to what I’ve trained with. Harries.

This technique is named after Michael, a pioneer of modern practical combat shooting. The most popular of the hands-together techniques, the Harries Flashlight Technique was developed in the early '70s for use with large-bodied "police flashlights."...

I have both. A streamlite TLR-4 on my gun when it’s in my nightstand, but I take it off for pocket carry.

I’ve also got a 1040 lumen flashlight in my nightstand drawer next to my gun.

Then a little 150 lumen light in my multi tool case on my belt.

I have never used a mounted light and prefer keeping it in hand to be able to control it separate from the weapon.

I also have both. My bedside pistol has a Streamlight TLR 8 mounted. It has constant and momentary on modes. I have mine set up to display the light while also projecting the laser dot. Since I can easily control the light, I feel it is the best of both options. It also lets me keep both hands on the pistol.
The light is 500 lumens, and in my mind a defensive weapon in its own right. It does limit your holster options right now. At this time I would have to order a custom holster for around $100 to keep it mounted full-time.

I’m old fashioned, but to me the weapon light just gives the bad guys an aiming point in the dark. Also using the light on the weapon means you’re pointing both at the same point. Instead, I keep a very bright flashlight on the nightstand right beside the pistol. If needed it is held as far from my body as possible while the handgun is held strong hand and centered where it can easily be aimed as needed.

One thing I have trained on is holding the pistol low and away, using the laser dot only to direct my fire. I have managed to get a real good zero on the laser. I could keep most of my body concealed and, while peering around a wall or door, take only my right or left hand and deliver accurate fire. In this circumstance I could fire with only exposing my hand and about half or less of my head. Just something I have trained on lately.

I’m thinking of buying one. I don’t plan to put one on my carry gun. I don’t really see the practicality in that. I have a home defense full size Gun set up I would like to get a light for. Right now I have a flashlight separate next to it, I would prefer to have the gun in both hands if I needed it.

Like any other tool, context is important, and training with those tools in those contexts is important.

My HD firearms all have lights mounted (pistol and rifle). I have a myriad of independent flashlights available, including on the nightstand.

My EDC firearms do not have lights mounted on them. 99.999% of the time I have an EDC flashlight on me.

When I’m out and about, my EDC light gets used for illumination. I definitely don’t want to go around flagging everyone/everything if the only light I have available is on the firearm. I don’t oppose flashlights on an EDC, I just don’t personally use them.

At home, though… If I pick up my firearm, it’s because I’m at least considering there is a lethal threat. And I’d like as many hands on the firearm as I can, which is why I dont have a seperate light in that scenario. There are a great many myths around using lights indoors. YouTube has some good videos if you can’t/don’t want to take a low-light class.

I subscribe to the “you can’t have too many lumens” philosophy. Some folks will say you’ll blind yourself, but with just a teeny tiny bit of practice you know where your mirrors/reflective surfaces are, and putting a substantial amount of light downrange has some obvious benefits. If they are blinded, they are not returning any sort of accurate fire. If you leave the light on constantly and walk around the house, then sure maybe an intruder would take aim at the source (since they aren’t blinded). The proper way is to use quick bursts of light, you know where all your stuff is and should be able to recognize what is “different”, then continue moving.

Other issue, do you illuminate with the gun pointed down as to not flag any unwanted target.

You can point the light down at the baseboards or up at the ceiling for “umbrella lighting”. That will illuminate a lot without directly pointing at anything. Of course, if you live in an apartment building and have neighbors above/below then you may want to adjust.

Aaron Cohen w/Sage Dynamics has some really good videos around low-light. If you have a few minutes check them out…

Explaining why you can never have enough lumens

Using a Handheld light only…

Using a Weapon Mounted Light only…

Transitioning from WML to Handheld…

I keep the weapon mounted light at home. A pocket light leaves the house with me.

I know this is old, but this video reminded me of this post. It’s a story where the weapon mounted light ended a break in (possible any flashlight would have worked). 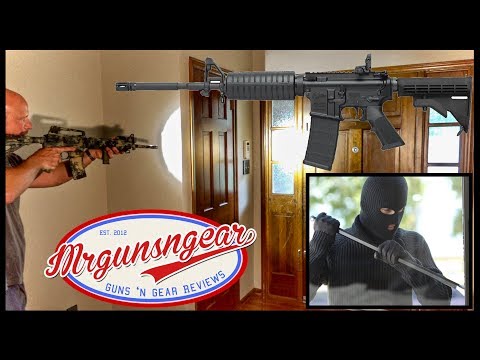 Have you been able to find a Holster for you weapon? I have the TLR-8A and I’m not having any luck. I was going to take a training class where I need a holster, but haven’t been able to score any yet.

Yes sir I did. I ordered a custom holster from Black Point Tactical. It is an OWB Kydex rig. They offer IWB as well. I have not gotten mine just yet. They take 7 to 8 weeks to be delivered. They are needing an additional 1 to 2 weeks due to Covid. They are in Georgia. They also make holsters for Sig. Great reviews. I will post a review when I get mine next week.

Thanks, I’ll check them out. I just found some from Legacy Firearms, but they are a bit expensive. Of course at this point my options are so limited I may have to break the bank. They are about 8 weeks out as well - bummer.

How do y’all feel about a rechargeable fun light? I’m looking into this one. It’s well liked,