Something a little different tonight. I was putting a new stock onto a Mini-14 today. I thought to rubber band the MantisX to the forend and see what that would look like.

Here’s the first ten trigger pulls from a rifle I haven’t shot in probably 35 years (don’t actually recall when I last fired a long gun of any kind). 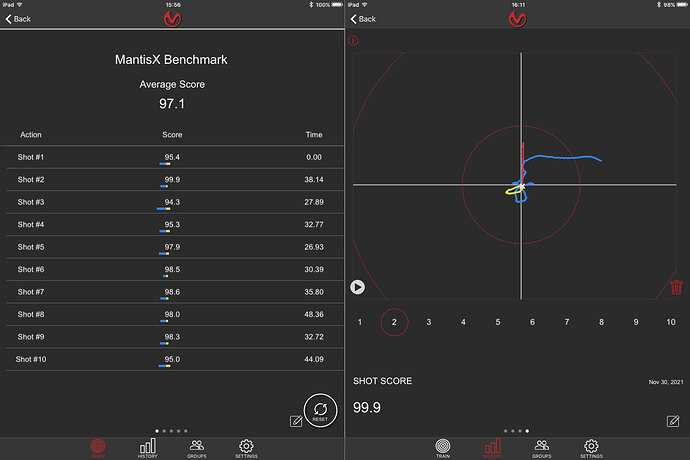 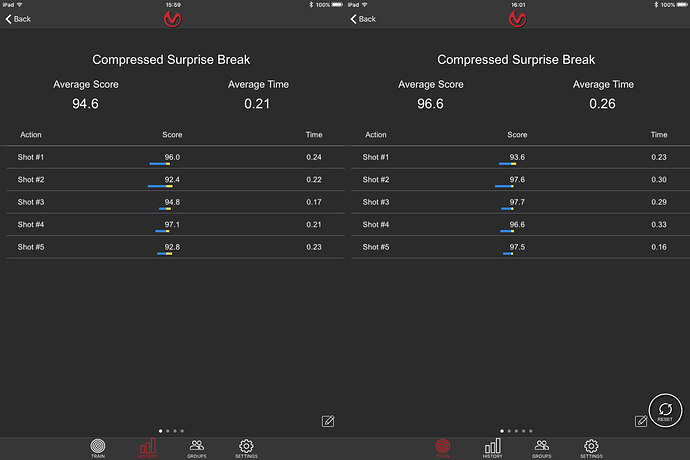 Conclusion:
It was worth trying, but MantisX doesn’t seem to offer much for a long gun in dry fire, if you already know how to hold it and have some idea how to run a trigger. Maybe in live fire if the paper and timer don’t tell you enough.

Did you read the trivia about MantisX, that on one of their first prototypes, they ran, I don’t know, twenty rubber bands around the unit to hold it to the gun?

Glass of Water? Piece of Cake. Ok, not really, it was exhausting — and it wasn’t the shooting that was tough, but the racking! I think I possibly held my breath through the whole thing. Didn’t spill a drop though.

It may have helped that I practiced something like this on a road trip with my wife a couple of months ago, balancing an orange on my head for 100 miles, driving through Texas. 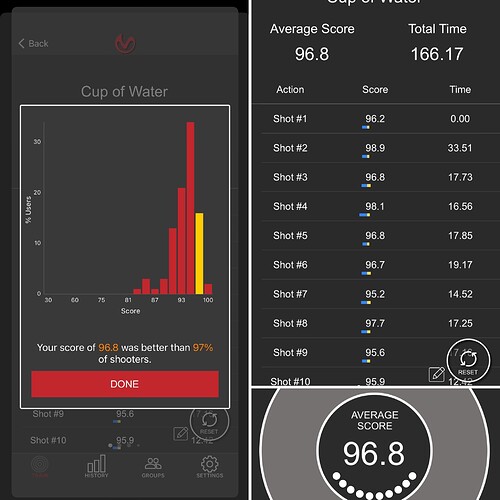 Maybe, sounds vaguely familiar… Not sure how massive their prototype might have been (or if they were testing with live fire). Just a couple the mailman drops off was enough for my exercise. I’ve also used painter’s tape for strapping it to a magazine I didn’t want to sacrifice for an adapter — worked as good as anything.

…balancing an orange on my head for 100 miles…

I had a friend who had a dent in his head. How do you balance a spheroid on an ovoid?

I did this Glass of Water once, and neither failed nor found it much fun. I set the glass down to rack, then figured out where my flat spot was again for each shot. Cheating, I guess. Probably took me half an hour.

Good shooting! Let me know if that skill ever comes in handy.

I can see more practical application if they asked us to dance a jig while shooting (and keep your score above zero).

Let me know if that skill ever comes in handy.

I doubt that I’m going to find myself in this configuration during any self defense scenario. I took the challenge more as a test of calm and balance. It won’t be one of those “practice until you don’t get it wrong” drills.

How do you balance a spheroid on an ovoid?

I had to go get a tooth pulled before I got around to Jumping Jacks today.

Before leaving I briefly joined @Alces_Americanus in his “Close, but No Cigar” championships.
I don’t get a repeat on this every other day, so couldn’t pass up the brag chance. 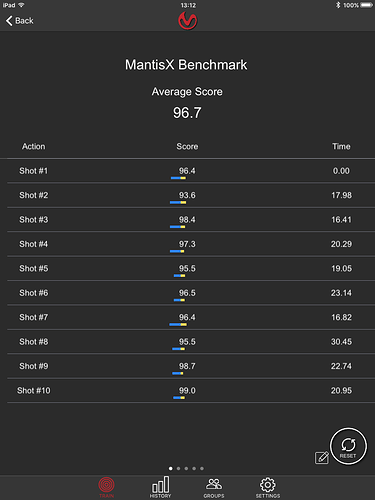 Look for me back in the regular pasture tomorrow.

Nice shooting. It’s hard sometimes to pull yourself back after missing a shot (though, really, is 93.6 “missing???”)

Look for me back in the regular pasture tomorrow.

Surely not chewing your cud after the tooth episode!

No, for me a “miss” would be below 90 on a shot I know I can hold over 95, or pretty much anything under 85. As often as not, I’ll blame those on the voodoo inside the damn machine anyway. Pulling up a blown shot is about as hard as being consistent for ten. Finishing slow fire on a high score or rising trend is unusual for me. Excellent first shots seem pretty common — which I guess is a good thing.

My goal on the Benchmark is any average 95.0 or higher. You’re the one who thinks ten shots ≥95 is a plausible goal. I just

and carry on. I do try to be ready when

No cud for me. Liquid in; liquid out for a bit. Try not to think about it.

I guess today’s challenge comes in especially handy (no pun intended) if you’re Rick Deckard, and you’ve been chasing around a drippy, dilapidated apartment building with Roy Batty. 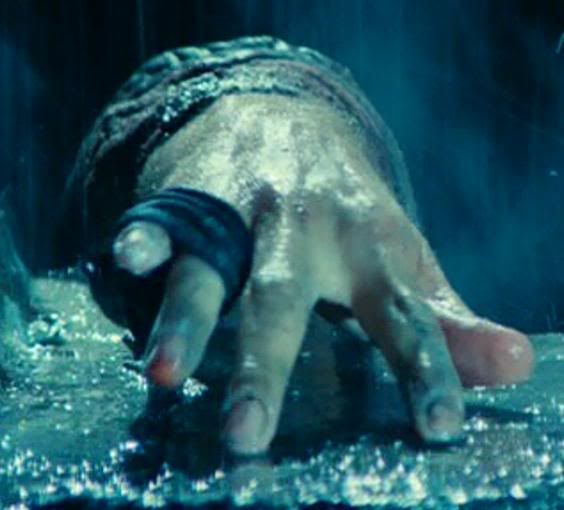 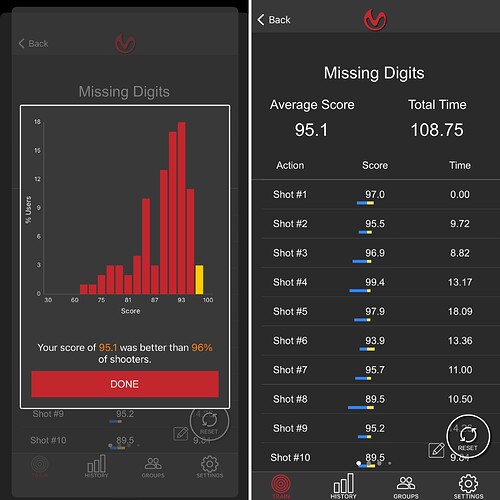 You found the motivation!

Were we were supposed to shoot with only two fingers and thumb of strong hand?

Or could we use weak hand, plus three fingers?

I couldn’t tell from the instructions. So I ran it both ways. Turns out that it didn’t make a lot of difference… 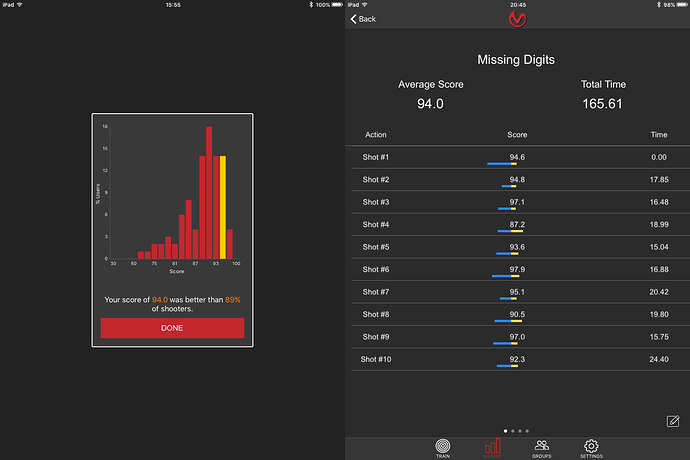 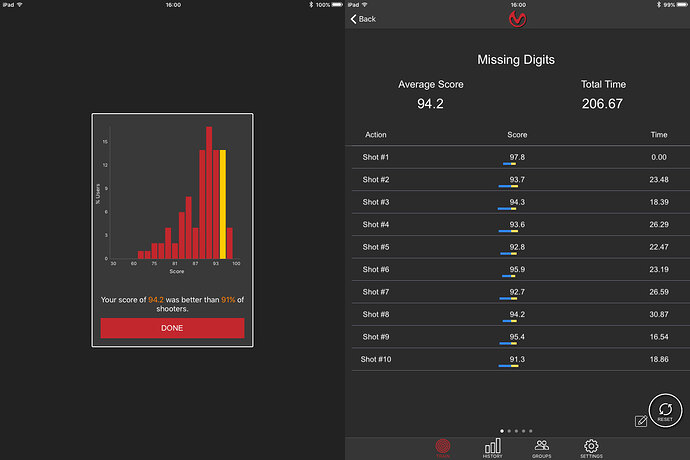 I suspect that recoil recovery and maybe pain would be bigger deals with live ammo. Benchmark today was not appreciably better

with the second hand or the extra digits. Used up all my mojo yesterday, I guess.

I am looking at getting the their Laser Academy system, as well as the Blackbeard for AR’s. They look like they will be excellent dry fire training tools! Does anyone have experience with the Academy or Blackbeard yet?

…with the Academy or Blackbeard…

I don’t have an AR, and my old iPad won’t run the Academy software.

I understand that you can download the Academy app for free, and it works with any laser cartridge and U-print-em targets. To at least get a feel for what they’re up to — I think in-app purchase for full function of the app.

Maybe somebody with product experience will pipe up.

Hey @Brandon_USCCA, I have the Laser Academy app, and a Pink Rhino laser cartridge — the only purchase I needed to make. The system is fun to use, and MantisX has free targets for download.

There were some issues with cartridge alignment in the barrel. MantisX created a calibration feature, but I haven’t used the system since that was released so I can’t say how well it works.

I will say the folks at MantisX are always innovative, and provide great support.

I think it’d be great to run each app (LA and MantisX) on separate phones at once to compare how shots are recorded and where they hit. Maybe a third phone to record video also.

(You can’t have too much technology.

I took the Mantis to the range today. I have to be honest, the system is all “neato” and everything. But honestly, I’m thinking that it goes against my personal thought process of “Don’t let perfect get in the way of good enough”.

I shot very well today at the range. All of my hits were in the cardiovascular triangle. Many were closely grouped. I worked on my trigger reset, drawing and shooting on the move. All from what I consider DGU distances. I took a few peeks at the Mantis app on my phone after each string and found myself getting a little too focused on the minutia. Too little trigger finger, tightening fingers, et al. And all the while, my scores on Mantis were anywhere from high 80’s to a 97 in a few instances. And then once again, going back to the target … all were well grouped in the cardio-vascular triangle.

And I was looking at my target and absorbing all of this I asked myself to get back to what I want to teach my students regarding defensive marksmanship.

I removed the Mantis Evaluation from my list of offered services. I think that for me and for those that I have instructed over the the years, Mantis is better suited for dry fire when the range isn’t practical or finances won’t allow.

Allowing perfect to get in the way of good enough isn’t for me. And good enough is really all anyone will ever need in a critical incident.

Stay safe out there,

…the system is all “neato” and everything.

Somehow I missed @Frank73’s post when it went up. But yeah, pretty much what I see.

Juggling MantisX at the range seems to be just a hassle with little clear benefit — and my regular exercises usually need to be adapted for it, so it makes kind of a day off from consistent progress tracking. There is satisfaction in confirming live and dry fire are about the same, but is that of value if target and timer can tell you the same thing?

I don’t find the “coaching tips” useful in understanding the previous trigger release. Once I figured out what the device wanted, I was shooting in the low 90s from the outset. I do see where group scores are posted that some folks do have consistently low and erratic scores regardless of speed/pace — and some who don’t match dry fire with live ammunition. But I’m not in contact with those folks, so I’m not sure what might be going on.

Maybe without a clear understanding of handgun biomechanics (and therefore receiving low scores without understanding why), a person would be helped more by the tips. I don’t know whether MantisX feedback would assist that same person learning from a live coach/instructor. I’m not in that trade.

I do perceive MantisX has improved my real time shooting for defensive results. Not by allowing real time defensive shooting, but by coaxing me into a more disciplined operation of grip, trigger, posture, and such. It’s a high tech Dot Torture or Wall Drill.

If a person believes those kinds of untimed precision exercises build useful defensive proficiency, MantisX can reduce the sometimes grim tedium of skill-building. For someone who believes defensive skill can be acquired by shooting only defensive targets at defensive speed at defensive distances, the device might not bring much to the project. The value I get from it is in dry fire, not at the range.

Anyone chance to see this, the latest exercise on the Mantis Laser Academy app?

(It is too a Christmas movie)

Don’t try it … next to big glass exterior wall

I’m a new shooter and was looking for a way to practice dry fire that was meaningful and would help me learn the basics of my stance, aim and trigger pull without hearing ‘cha-ching’ every time I pulled the trigger. At the same time, range time for me is limited due to work and location and obviously the cost.

Enter Mantisx for me. Somehow, I won a $250 gift cert from Mantis for signing up to the news letter (shocking as I literally never win anything) and decided to get the X10. I also have a laser cart so I grabbed LA.

At this point, I only have a bout 1000 rounds through it (100 of them live fire) so I figure I’ve saved about $250 in ammo (yeah… haven’t found the best prices for ammo yet and don’t have alot of money to buy in bulk… suggestions are welcome)… But at the same time, I feel like I’ve been able to get comfortable with my grip, aim and especially my trigger pull… all things that I feel are well suited to a system like this.

I also pair this with LA at home so I feel I’m getting some benefit and don’t feel like I’ve wasted any money or time. Doesn’t mean I will skip the range or any training with an instructor, but at least when I’m there, I’ll have some kind of base behind me and feel like the $$$ I’m spending are worth it.

Something funny happened tonight. But first…

Welcome @Christopher379. We were sharing a fair bit here for awhile. Help us liven it up again!

Ok, back to tonight’s MantisX practice. I set up my X3, connected to my phone, and watched the thing calibrate. Then I shot this:

Whoa! What the heck??? My first shot (as interpreted by MantisX) was a 46.2. My next wasn’t much better. They were, however, oddly consistent as you can see.

I’ve never seen this before. Clearly, the calibration failed in major way.

We talk sometimes about whether we trust the device or not. What I’m wondering now is if it can fail big, can it fail small as well? 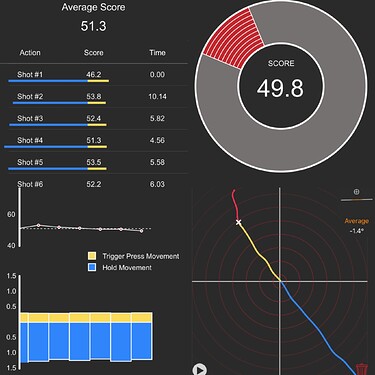 After turning everything off, I restarted and it calibrated again. FWIW: 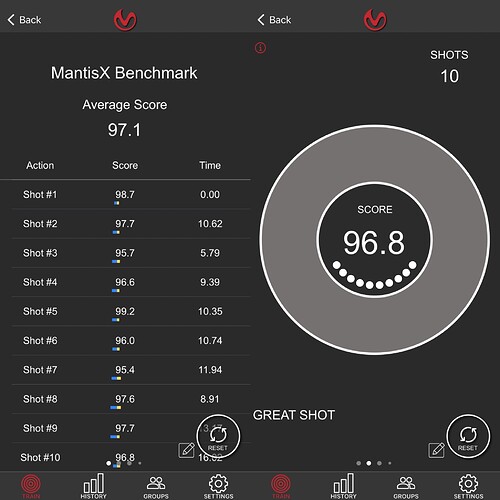