Is lead fouling that big of a deal?

I just brought the Sig P322 three days ago but not before I looked at some reviews. One complied of lead fouling after 500 rounds. Personally I clean and oil my guns after 250 rounds or less. I run first Hoppes #9 thru the barrel, cleaning and oiling the rest of the gun letting Hoppes soak in the barrel. The I run my brush thru it and then running more Hoppes in it and a final dry patch in it. By the way the P322 is sweet to shoot and found out Sneaky Pete seems to have a holster for it. You have to be a little careful loading the mags as it is double stacked or else you will have misfeeds. Also Sig test fires the gun before they send it out, at plus in my book.

I use copper wool I forget who makes it but you can find it at the grocery store near steal wool. Get the kind that is not steal coated with copper because the steel might scratch. I wrap it around a old brass bore brush and run it through the barrel. Congrats on the new gun.

Lead fouling is a problem concerning accuracy. It doesn’t build up in the rifling evenly and adversely affects the bullet’s spin when it leaves the barrel.

Some people say they shoot copper bullets to clean out lead.

From the video I saw regarding this Sig322 issue, the concern was more with the barrel specs being undersized therefore physically scraping material off the bullet, leading to quicker, heavier fouling of the barrel then “normal” with other 22lr pistols. As we all may know, a .001 mis-sizing can lead to problems.

Some people say they shoot copper bullets to clean out lead.

I’ve read that too. I’ve read others who say that’s nonsense. Gotta love the interwebs. Everyone has an opinion.

I shoot a lot of lead. I strive for a .001” oversized lead bullet. Lead is soft and easily squeezes into an “undersized” bore.

What you absolutely don’t want is an undersized bullet which allows hot propellant gas to blow around the bullet.

I’ll wager that any ammunition that functions properly in the firearm will be fine.

22 long rifle is a heeled bullet which swells up to bore diameter after it’s fired. Pull one apart and see for yourself!

Here are the videos I’ve seen about the leading of a Sig322: seems a bit excessive after a couple of magazines

I have a GSG Mosquito with 3000+ rounds with no appreciable lead build up using a myriad of ammo brands and configurations.
Only time I noticed leading was on my CMMG insert after shooting several hundred Rem. Thunderbolts. jacketed rounds don’t seem to cause any issues.

I noticed leading was on my CMMG insert

Exactly!
You’re pushing bullets made for a .222” barrel down a .224” barrel. Plus the long running start the bullet has before it hits the rifling in the barrel.

Lead fouling can be a big issue. I traded a cheap shotgun for a 4" Ruger SP101 22lr. Got it cheap because there was no visible rifling in the bore. Accuracy was nonexistent. Took some work but I got the lead out and it shoots fine. Birchwood Casey makes a lead cleaning cloth that works. I cut patches and ran it down the bore after wire brushing. It will also clean the black carbon of the cylinder face. 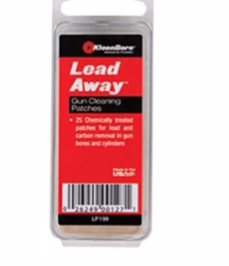