If ATF comes for ARs -- Another View

I have been around and used firearms for going on 60 years. I’ve pretty much fired everything from a .22 revolver to a .50 cal M2. But what I can’t understand is all the hysteria about the ATF taking your ARs. I know of no State or Federal proposed legislation that would include AR/AK seizures. And even if it were proposed, the chance of it being passed and signed into law is about as remote as catching a falling star.

Honestly, it seems like some of you have been told a scary bedtime story and you believe it.

First, a confiscation law would have to be passed. It would not go into effect until SCOTUS ruled on it. With the current makeup of the court, that’s got about as much chance as a snowball in hades.

Second, how would they know you have an AR/AK? The Background Check database doesn’t hold that information but for a short while. However, I do know several AR/AK owners who constantly brag to anyone who listens that they have one. It will be easy for ATF to get their AR/AKs. But the rest of the owners whose every conversation doesn’t revolve around their firearms will be hard to root out.

I’ve shot IPSC, IDPA, and SAS. A Colt Peacemaker, Winchester '73 and a Coach Gun are all I need to defend my home from bad guys. If I need more than that, I’m in the wrong place at the wrong time.

I hope you’re right sir. I hope that I’m overreacting. I certainly don’t mind admitting when I’m wrong. I’ve felt for awhile that outright disarmament was the endgame. It seems to me that a single-sweep, all encompassing confiscation would never work, while methodically banning certain things over years could work.

BUT, like I said in the beginning, I hope you’re right!

Despite what I might want to believe about possibilities in the U.S., I also realize that things that have happened in other countries can also happen here.

With the passage of Red Flag laws and the proposed taxations, those are simply small steps to an eventuality.

I agree with the latter. I too hope I am overreacting. I wonder how many other individuals in countries like Cambodia, Russia, Germany, Yugoslavia, etc said the same as you. “They won’t take our guns,” or “do you know what they would have to do to take our guns.”

While I understand the huge undertaking that would have to occur to perform a gun confiscation, the amount of talk about it by the radical left, including POTUS does shed a but of concern on the issue.

Do I think a confiscation is likely, no. Do I believe it is within the realm of possibility, yes.

The fact is they are talking about about it and history has proved that bad stuff happens when it occurs.

First, a confiscation law would have to be passed. It would not go into effect until SCOTUS ruled on it.

That’s incorrect. The Supreme Court gets involved when an active law is challenged, not before it goes into effect. Congress could pass a “scary bedtime story” law and it would go into effect immediately upon the President’s signature.

I remember Obama saying the government could figure out what guns a person had buy the charges on credit and debit cards. A federal law could also be passed to force gun dealers to give up the records on gun purchases.

The fact that you would never be able to use the gun without facing prison time and loss of all gun rights is the goal they are after.

Any confiscation law signed by POTUS would be immediately appealed directly to SCOTUS. It is my belief they would take the case. Either that or issue a restraining order preventing implementation until the case could work its way through the Federal court system.

Either that or issue a restraining order

In the meantime, the law would be in effect. None of what you posted invalidated my comments.

I said nothing about “Antifa, BLM, Aryan Nation, Klan, Skin Heads, 3% and others…”

Apparently, you don’t understand what a restraining order does. It stops any and all actions associated with the statute it is issued against. While the law would be “on the books”, the Federal government would be prevented from implementing it until SCOTUS made a final decision.

I was not responding to you

First, the conditions in America are in no way similar to those in “… Cambodia, Russia, Germany, Yugoslavia, etc…”.

Second, please provide a reference to POTUS ever saying he would like to see confiscation of semi-automatic AR/AK type guns. I know of no instance in which this has happened and would love to have the source of that information to add to my facts in this regard.

I hope you’re right sir. I hope that I’m overreacting. I certainly don’t mind admitting when I’m wrong. I’ve felt for awhile that outright disarmament was the endgame. It seems to me that a single-sweep, all encompassing confiscation would never work, while methodically banning certain things over years could work.

BUT, like I said in the beginning, I hope you’re right!

Thanks for the reply… Right after mentioning BLM & Antifa is the phrase “come to prominence.” The groups you mentioned are well-known (especially in the South) but I would argue that by and large they have been underground.

As far as what Antifa & BLM actually do… You have your perspective but I have a different one & that’s ok.

You seriously have a problem with Red Flag laws??

I agree. BLM started off with good intentions, then Soros gave them 100 million and it has been all down hill ever since. Funny how after the election , you don’t see or hear much out of them now.

Apparently, you don’t understand what a restraining order does. It stops any and all actions associated with the statute it is issued against.

Of course, it does… or should. What I feel you are missing is the time between enacting the law and the issuance of the restraining order.

You can believe the conditions are not similar to those in the countries listed but it does not mean they won’t get there. Anticipate for the worst and pray for the best.

To say a confiscation could not happen in America is ridiculous because it could happen anywhere.

As far as confiscation, read the following: 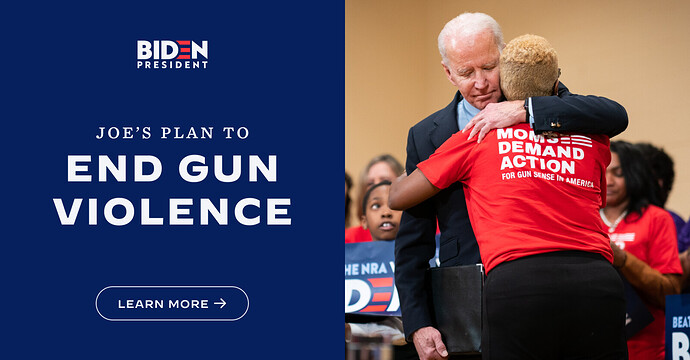 Joe Biden's plan to end gun violence will tackle America's gun violence head on, and treat it as the public health epidemic it is.

If you don’t think items in this are round about ways to confiscation, please think again. Plus, Beto O’Rourke plainly said he was going to take our AR’s and AK’s, then when Biden was nominated as the candidate for the democratic party, he said Beto was going to help him with the “gun problem”.

I am not saying it is going to happen, but could it happen, sure. Anything is possible. I would rather fight for my rights through non-violent appropriate means like being an advocate, contacting reps and senators, and supporting groups like GOA and AZCDL, then sit by and hope it never happens.

And take a look at this.

'Bingo': Biden says he's coming for your guns if you have an assault weapon

During an interview with CNN's Anderson Cooper on Monday, former Vice President Joe Biden said that he intends to ban assault weapons if elected president, and he would accompany it with a national gun buyback program to eliminate as many existing...

Sounds like he wants them off the streets to me

Actually, there have been numerous cases recently of Federal courts issuing restraining orders within hours of this or that filing. Several have been taken directly to SCOTUS. I believe that would happen in the case of a confiscation law.