How many legal and tactical errors can you spot? 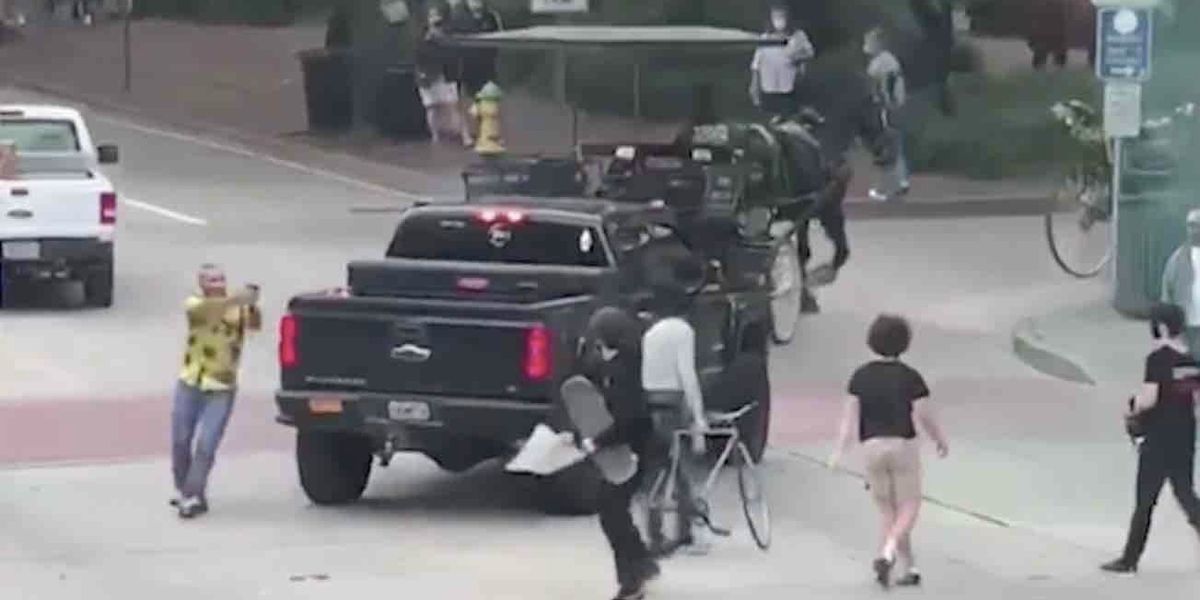 The motorist was charged

The driver should have been given the benefit of the doubt seeing the rioter are acting with impunity these days.

Isn’t that brandishing? IMO-From what I seen in the 1:07 video on the link he tossed a smoke grenade/pyro into the crowd of peaceful idiots laying down on the street. Shouldn’t he just drive around the dummies laying on the street rather than stopping the truck, getting out and ready to engage without provocation? I may have missed something.

First off, why not back up and avoid going by the crowd in the first place? Next option would be to go around the crowd. No need to engage if you can get clear.

If they’re lying down, they’re not moving to block you. No need to draw or toss a smoke grenade. Now if your vehicle gets immobilized, the greade might come in useful to try and disperse the crowd and create concealment to facilitate an escape on foot.

Once the crowd dispersed, sticking around to argue with witnesses is also a bad idea. Who knows when the crowd will come back and they’ll be out for blood. Get somewhere safe while your passenger calls 911.

And maybe people are fed up with the bull

and are willing to take the fight on the offensive. He was obviously prepared to do so.

Lets wait to hear the drivers side of it… There needs to be some laws for drivers to defend themselves with these road blocks becoming more common and more dangerous. Peaceful protestors have a right voice their opinion, but they don’t have a right to detain motorists and make them listen to the protestors message. I would say give the police 10 or 15 minutes to arrest anyone blocking the road. If the police don’t act you turn on your flashers honk your horn and move forward at 5 mph. Protestors can either move or get run over. If anyone in the mob is openly displaying a weapon (gun, knife, bat, etc) or makes a threat that the driver records then they can hit the gas and do what ever it takes to get clear.

Makes absolutely no difference what he did or didn’t do, he’ll be hung by morning. Bad guy wins, good guy looses. Always!
Since all this started I haven’t seen any good come from people doing the “RIGHT” thing. No one is doing the right thing, the better question is what should he have been doing? Quarantined in his home, don’t move until this is over, stay safe, order in, avoid living life! Don’t shop, don’t eat out, don’t bbq, don’t go to school, don’t visit family, become sheep, stay where you are. Wait for the socialists orders, they will tell you when you can move about the country. This country will never be the same, we are living the new normal!

First of all, he instigated the situation by throwing a smoke grenade in the middle of them. Self-defense can not be used if you escalate the problem. Escape, evade, de-escalate are requirements to initiate before you can think about pulling your gun in self-defense.

In my opinion he should’ve never thrown the smoke grenade because they were just laying there, and besides he had already gone around them. The driver brought this upon himself. That’s why the protesters reacted the way they did. As a responsibly armed citizen you are not the aggressor and in this case the driver of the pickup was.

If he threw the smoke grenade first then your right he escalated the situation. I think we should wait to hear his side of it based on not being able to see what was happening on the passenger side of the truck as he was going around the roadblock.

It was an illegal road blockage. From what I saw, I would have called 911 to report it and moved on.

calling 911 would have been a joke… the police would have laughed at him… I still say give the driver the benefit of the doubt.

calling 911 would have been a joke… the police would have laughed at him… I still say give the driver the benefit of the doubt.

I don’t disagree - regardless, that is the course of action I believe I would have taken based on what I see in the video. I hope the police would not find it comical, but if they did at least I would have a record for CYA.

On October 3, 2020 a Decatur man was arrested for aggravated assault after pulling a firearm.
15 protestors were blocking an intersection and the driver in his pick up attempted to drive around the protestors.
Cell phone video shows the truck stop and a green fog colored smoke grenade was thrown from the vehicle into the street where the protestors were lying in the intersection.
People began to scatter but one person threw a thermos at his vehicle and a second starting hammering his passenger side with a 10 speed bike.
The driver existed a vehicle with what appeared to be a gun in hand. The crowd quickly dispersed

except for the individual that hit his truck with the bike.
The passenger door opened and a woman encouraged the man to get back in the vehicle and they drove off.
2 parts to this :
To any in Georgia, This WILL NOT be another Chicago, Seattle, Portland, NY or anywhere else! We’re not putting up with it! If the City of Savannah does not want people defending their right to travel unaccosted by protestors with no permits in intersections then bashing people’s vehicles with devices - then arrest those 4 that met with the police to give details on the driver / vehicle, otherwise accept what’s coming! Georgia law says you can protect your habitation and the vehicle is considered as an extension of your home.
The other take away from this is the vehicle dispersed a smoke grenade first, but again…
Be mindful politicians… This WILL NOT be another Burn Loot Murder City!
We’re NOT putting up with it!

This might be a bit more effective if you sent it to the editorial pages of the newspapers that covert hose areas. No snark intended or sarcasm . Just a voice from the

I work in private security and and can state with certainty that unless there is a danger to myself, my ward or their property I have no legal authority to engage unless the suspect is engaged in a felony. This means the subject is putting a civilian’s life at risk and even then I have to be positive that all criteria are met before I engage. If I get the victim to safety, if I can deescalate the situation or distract the subject and allow police to get involved I had better do those first and only engage as a last resort.
Georgia has the Castle Law as well as Stand your ground. In this case though, the driver engages the protesters first by throwing the smoke canister. He initiated the conflict. This where many gun owners can find themselves in legal trouble. The driver has the right to defend himself, the passenger and his property but a permit nor the laws I mention allow for creating a situation and for the purpose of escalating it. The driver by his own actions was looking for a conflict instead of avoiding one.

But them we also have a case where a person defending himself, is arrested and the antagonists/attackers are still free. So law and order gives way to anarchy. Trying to pretend we are not at this stage its just lying to yourself.

First, while private citizens are NOT law enforcement, and should not attempt to enforce the laws, the ‘protesters’ (Terrorists… as they are not …NOT… protesters once they start violating laws, and it is ILLEGAL to block traffic … illegal to block roads, and violates the right to freedom of movement of all.)… being in the street, seem to think they are fine to do so…
The motorist appears to have thrown a smoke grenade or some device into the crowd (they act out, he responded) and they turned it violent.

Once it became violent, he has a right to defend himself, and they were using weapons.

Now, to deal with the issue as we probably should, he was going around them, and should have kept going and NOT thrown a grenade.

Third… but, we all know the frustration of lawlessness when law enforcement and the leftist politicians in control of them, REFUSE to enforce the law, and allow terrorists to run amok.

Not sure he should have gotten out, but then, he should sue the city for the city allowing his rights to be violated by the terrorists in the street. He may sit in jail, but he will have money waiting when he gets out.