How Many Guns Does A Normal Person Have?

You’ve probably heard this one before:

“How many guns does a normal person have?”

“No, a gun enthusiast has fifteen.”

“No, people obsessed with guns have hundreds.”

“No, psychos seldom own guns, or maybe have one or two.”

“No, a normal person has about five. We already covered that.”

I was at a weekly wrap up with some co-workers before the Thanksgiving weekend, just shooting the breeze, when the subject of guns came up.

And I’m just sitting there, looking at my gun database on my iPhone, counting my current inventory, and keeping my oh-I-so-want-to-tell-you mouth zipped shut, as I imagine their jaws dropping to the floor to learn that there’s a CCW right under their noses.

“He once told me they are tools, like saws. Different kinds for different things. I don’t know how many different kinds of guns there are but I would have to stop and count how many saws I have so maybe it’s like that?”

@Alces_Americanus Great listening to the women’s conversations, and the temptation to join in BUT it’s ALWAYS BEST TO BE SILENT

As I indeed was.

I guess I would be an “obsessed gun enthusiast” then.

“Who needs more than one gun?” the first woman asked. “Who even needs A gun??”

Who needs more than one pair of shoes?

You cannot use a 30.06 to shoot ducks and you cannot use a shotgun to shoot an elk. Then you cannot conceal a 30-30 but you can conceal a 9mm. A 22 is good for small critters but not good to try to stop a bear. So at least five guns needed for these factors. That is not even to start the list of guns that are fun to shoot or guns that you just want!

Folks like to collect all sorts of things, sometimes it makes me laugh. Why would anyone try to figure it out? Just beyond me…

I will not even allow a number of guns I have to figure in or to determine my normality. i will have as many as I want to have and still be just as normal as if I had none.

This topic can be merged with one from last year. Search “How many guns do you have?” A lot of responses on the topic.

Your post reminded me of Larry Potterfield’s wife Brenda in his commercials.

I think he shot whatever those shoes are made of

What is the average, BTW? I keep hearing there are more firearms in the U.S. than there are people. I don’t know if that’s true, but it would mean the mean average American owns at least one firearm. It might be more interesting to know how man firearms the average firearm owner has, eliminating non-owners from the count.

Are there reliable estimates for these?

I guess you could check the ATF registry.

Not saying I’m under this pillow because you make me nervous dad but you have a lot of guns! 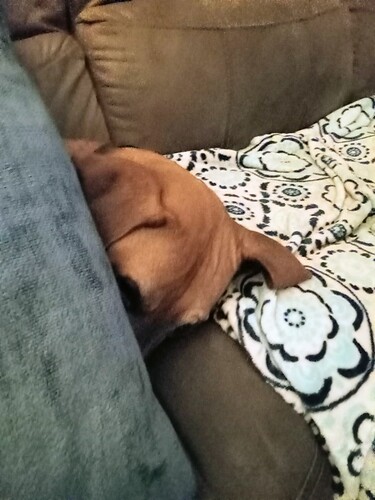 I am pretty sure best guesses are that less than half of Americans own firearms. By that I would say the average American is not a gun owner. But there are a fair number of gun owners who own enough to make up for that on the totals.

Also it seems that the best guesses still put individuals or households at somewhere in the ballpark of half.

Then again, a lot of gun owners are “I’m a gun owner, but [here is all the gun control I support]” so there is that as well