Hotel is private property and as such they absolutely have the right to restrict firearms on their premises. Mister underwear gun owner just made responsibly armed citizens look like a**holes.

That’s a crock… safety my butt, where was the “SECURITY MANAGER” in 2017? Sure may not have been same hotel and the shooter at the time wasn’t attending a convention, the point is, they had NO reason to forcibly enter the room!
They could have been more cordial, maybe when they knocked he should have declared his allegiance to Biden!
If the guy was a true monster, he would have opened fired on them! He DID NOT have a weapon on their precious private property, so in essence he had already complied with their killing field zone!
Me, I would sue them into the ground. Unlawful search, with absolutely NO probable cause!
These are typical Gestapo tactics, you can read about it in any history book that hasn’t been burned or shredded by the left!
Can you spell FASCIST? It’s going to be a bumpy ride!

Maybe we are on the wrong side!

They could have been more cordial

Hmmm, I don’t know about that - the hotel employees seemed fairly restrained. Mister Underwear was the one saying “go f*** yourselves” several times.

He didn’t have a gun with him.

That “knocking” / felony search warrant banging on the door at 11pm has the same ring ( no pun ) as “wake the f##k up, now!, or we’re breaking in”. Courtesy is a two way street!
In essence they called him a liar as soon as he opened the door!
They made an accusation that was baseless and wrong!
This is how it looks and feels at 11 o’clock! In your underwear! 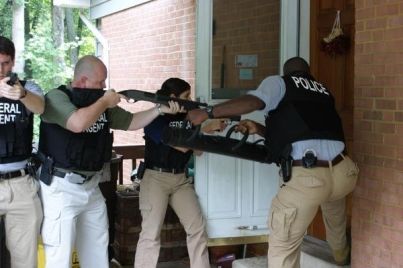 Not at all. He did not have any firearms in his possession. The hotel took drastic action in the middle of the night. Why? He stated he had no contact with anyone at the hotel until that point. Going to a gun range is not probably cause, neither would they know that he was there, unless they followed him or someone at the hotel knew he was there. Regardless, he was not armed and they had no rational reason to suspect that he was - as they did not give any reason.

Take your words into consideration if/when this happens to you.