He walked Clearwater Beach with an AR-15. Is he a menace or a martyr? 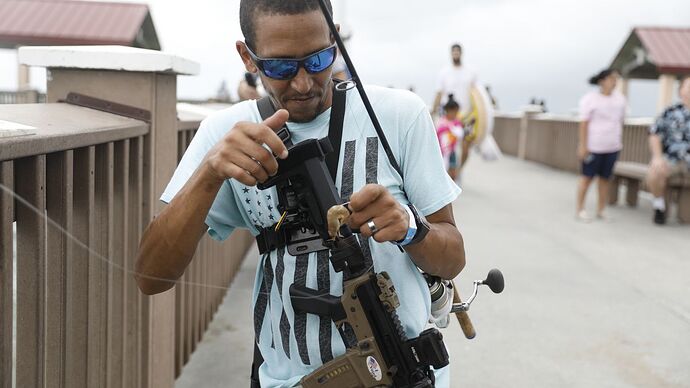 He walked Clearwater Beach with an AR-15. Is he a menace or a martyr?

The tactics used by Michael Taylor, a gun-rights “auditor” with a YouTube following, are legal. Whether they’re in good taste depends on who you ask.

Legal, but not very bright

I think there are much better ways to advance 2A rights. Maybe taking new folks to the range, teaching some gun safety…

What he’s doing pales in comparison to actual crimes committed by BLM and Antifa.

For me it’s a lawful stupidity.
Such behavior doesn’t do anything good for 2A supporters.

I didn’t say that. I merely wanted to shake his hand.

The same guy “organized” an open carry fishing day at the jetty near my house on the Atlantic side of Florida a couple of years ago. I personally chose to stay away from it. The local news stations covered it and showed a number of folks open carrying mainly Glocks, but there were a couple of nice looking 1911’s shown on TV as well.

I personally conceal carry when I go shore fishing. I do sometimes open carry on my boat because it is more comfortable, but CC while I’m at the dock launching or retrieving the boat. Technically I could open carry going into the bait shop, the grocery store to get ice, drinks, and snacks, but I don’t perceive that promoting responsible gun ownership.

If he enjoys the hassle of it all, then let him enjoy it.

Edit: Due to saltwater exposure, I select one of the more “economical” sidearms to carry fishing. I can’t see risking the corrosion on a 1911

Just throwing this out there…

You all know it wasn’t that long ago concealed carry was “only for the criminal element” right?

I will never understand this whole “only idiots open carry” mentality some of you espouse.

The 2A is all encompassing, it’s not “my way or the highway.”

Done properly, Open Carry allows a person to be an Ambassador to the 2A community. But you gotta have the right mentality, be calm and polite.

It also hinges on support from the 2A community, unfortunately there are those of you who are straight up FUDDS.

It also hinges on support from the 2A community, unfortunately there are those of you who are straight up FUDDS.

Dude, I hope comedy isn’t your main source of income, because you just flopped here!

If I lived in an open carry state then I would open carry. If I’m going fishing, my primary purpose is to bring some fresh food home - not waste my time creating an attraction and having people calling 911 to take away from my fishing time. Besides that, it’s hard to carry anything gun related besides a speargun in a wetsuit at 100’ down, which is how I do a lot of my fishing.

Silly however I doubt there have been any mass murders carrying a fishing pole. I may be wrong

I’m saying stop bashing open carry. It’s immature at best. It does nothing for the 2A cause but create division among our own ranks.

So no, there was no comedy involved. I was pointing out the drama, which is the opposite of comedy.

Guy did that here in Salt Lake City. But, he called the cops before he went to the mall, told them it was a 2A display and that the AR would not be loaded. The cops showed up and watched the general public freak out, and would explain to them that it was totally legal.
To the point though, making a public display by open carrying 2 guns with the intent of attracting the police attention so you can video them and post it on social media seems rather stupid to me.

making a public display by open carrying 2 guns with the intent of attracting the police attention so you can video them and post it on social media seems rather stupid to me.

That’s not the sole intention. He’s testing the laws because we won’t challenge big guvment.

At least, send him a thank you card.

Well said, as i enjoy carrying open or concealed on a regular basis, it just matters what kind of a mood im in.

not a menace by any stretch, and reading some of the above comments, I would like to add that the public freaking out is due to ignorance and media bias, and I would think that actual exposure to a guy like this might open some of their eyes and calm them the eff down with their “omg itzagun” hysteria.
Made me laugh awhile back, going for a work related eye exam before my shift, wearing my “Winnie the Pew” T-shirt which has that loveable bear depicted as an M4 carrying infantryman, and getting comments from two young women deep in blue state territory; “Oh, I love that shirt.”…it’s how your portray the message that counts.

Hi @spence, maybe calling people “FUDDS” wasn’t directed at me, but I felt like it was. I knee-jerked and immaturely called you a comedian – I apologize. Calling each other names alienates people and rarely if ever inspires either person to consider the other’s perspective.

“Right,” or “wrong,” there’s a lot going on here, driven by many different interests. I agree with @mattm that the public freaking out is caused to a great extent by media and how it shapes people’s perception of what they’re seeing.

Why do people get nervous, panic, freak out when they see a civilian open carrying a gun in public, but don’t have the same reaction when they see a military or LEO doing the same? As long as they’re following the law, objectively there is no difference.

But perception, and bias, driven by one interest or another, does exist, we can say it shouldn’t, but that doesn’t change the fact that it does.

Just because it’s legal, doesn’t make it right, and what I mean by “right” here is: Does this further the interests of those who support the 2nd? I would argue that it does not, but rather Taylor is getting in people’s faces to prove a point, and not to increase, or improve support for gun rights. I think his actions stand more of a chance of revoking the carrying while en route to fishing law than gaining more support for open carry.

Should officers know the law, and not be handcuffing him on misguided suspicion? Of course. He’s not committing a crime. Is the media guilty of unbalanced reporting, whipping up “gun violence” stories while ignoring or even suppressing those where a gun saved lives? You bet. But Taylor isn’t a babe in the woods here; he knows he’s causing civil discomfort at the very least when he walks the beach like this. Sure, he’s allowed to by law, but that doesn’t mean he’s being a good citizen, community member, or person.

he called the cops before he went to the mall, told them it was a 2A display

This guy in Florida also informs the police first. He also carries copies of the statute(s) involved to provide to responding officers. I had watched a few of these types of videos several years ago. Some are well-prepared, and others clearly just do it to try to get attention. The issue this particular man is addressing is the lack of knowledge of the laws by the LEOs, it isn’t to be confrontational, but unless one is carrying, it is difficult to inform the officers concerning those laws.

He does a good job at not trying to cause any issues, but to inform the officers. Most of the time, once they understand the laws, it becomes a non-issue. A couple times the ignorance of the police officers made it more of an issue than it had to be. But the officers were still wrong, and eventually let him and his friends go as they were abiding by the law.

The biggest issue I see in my state is that OC is legal, but like many here, believe it is wrong to do so. There are numerous reasons as to why someone would OC. I understand that OC with a rifle is likely to get you more attention, but that still does not make it wrong (illegal).

I had an encounter that might be a good analogy to the OC issue. On vacations that involve air travel, I do not take any firearms with me, but I always carry knives, and when we hike or walk trails, I carry a large Bowie knife in a sheath attached to my belt. One time after getting back to the resort, I did not remove it before I walked to a local store a few blocks away. Evening had just turned to night. On the way back, there was a crowd of young adults blocking the sidewalk. As I approached, I was about to step into the road to pass, but one of the youths moved everyone out of my way. The only thing I could figure is that he noticed the knife I was carrying. It seemed he was more intimidated by me (not my intent), than I was of them (I was unconcerned). Nothing illegal occurred, and we all survived the encounter unharmed.

I also could relate a story that the president of the VCDL told to an audience, wherein he happened to be carrying OC, and an encounter that appeared to be turning South resolved itself when the perps noticed he had a firearm.