He didn't get away with it - Got love the Redneck 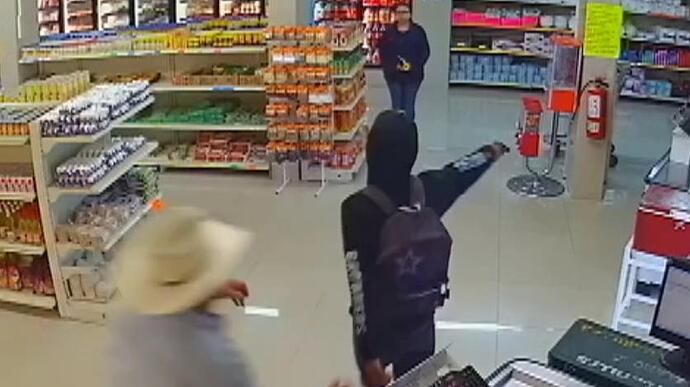 A man waiting in line at a Mexico butcher shop took advantage of an armed robber’s momentary distraction to jump on the criminal's back and disarm and subdue him.

It’s almost comical. The guy wrestles with him, he drops his gun, he get’s away and then runs for the door, that’s when I had to laugh…

The man in the cowboy hat took a great risk but it worked out in his favor thank God. If I am not mistaking it looks like a revolver and it was cocked at the time. The woman behind the counter took a bit too long to get on the phone and cool the authorities. This perpetrator started out fully clothed and finished out with no shirt and just his pants. A humorous video. Thank God that the other 2 men in the establishment helped out cowboy in this situation because it could’ve been tragic…

The two things that made me laugh were, when he runs for the door the way the guy catches him by the throat and body slams him and the woman had to untangle the phone wire instead of grabbing a cell phone…

Yea, do you see him concealing it in his pants?

Wow. I could write a six page report, single spaced, here; on each of the six players in this scenario; It cannot be made up.

If I could only write eight sentences it, it would be:

I had to watch it twice because I was laughing too hard.

Cleanup on aisle 3!
I could watch a perp get clotheslined all day long! Love the takedown!
Bad guys better take note, we’re beginning to enjoy taking you out!

Who in the h3ll uses a corded phone these days? Dam, the robber came in, cocked the revolver and then took his finger off the trigger, good finger discipline! It’s a miracle the gun didn’t fire when knocked out of the perp’s hand. Robber had his finger off the trigger, I can see why the cowboy went for it. Nly wish the cowboy had a gun-to drop the robber.

wish the cowboy had a gun-to drop the robber.

Except, perp had his back to the cowboy. Just going by the USCCA book, cowboy should have escaped when the perp faced away.
He probably shouldn’t have been in the store to begin with!
Are we beginning to see the danger in this?
If good people aren’t willing or able or need a lawyer to protect innocent people, society is finished!
Drop that f@#$3r, twice!

I’ve noticed that as well. Everybody is afraid of getting sued. The left have turned our justice system into a form of punishment.

Punishment for us, freedom for them.