Amazingly, our governor kept a campaign promise and signed constitutional carry into law when it hit his desk.
Miracles never cease.

Speaking of miracles……now we need to work on concealed carry in places of worship being simply allowed, not up to the leader. As a Catholic, I’m restricted by our archbishop. Reckon I probly ought to send him a letter like I do every other leader who needs to get their heads right.

As a Catholic, I’m restricted by our archbishop. Reckon I probly ought to send him a letter like I do every other leader who needs to get their heads right.

Jesus did not mind Peter being armed, He only wanted Peter to be more judicious in when to use it. [John 18:10].

now we need to work on concealed carry in places of worship being simply allowed, not up to the leader.

You’re making me think on this one. (Stop it!)
I want to carry any place I want to carry, but I also respect private property rights. Religious property falls into that category. I don’t have any influence on your archbishop, but I don’t think the state should, either. This is a place where the 1st and 2nd Amendments meet. If I were a lot smarter, maybe I could come up with a resolution for you.

But in the meantime, congrats on the constitutional carry!

Our church in Pickerington has an active safety services team that is always looking for qualified shooters. And being a non-denom, we are twice the grace and half the guilt.

I’m not a church goer but I do know that around here, the LDS Church “official” position is no firearms in the building. I’m guessing most people probably comply.

Hmm, Indiana right behind you.
How many states does that make, now? 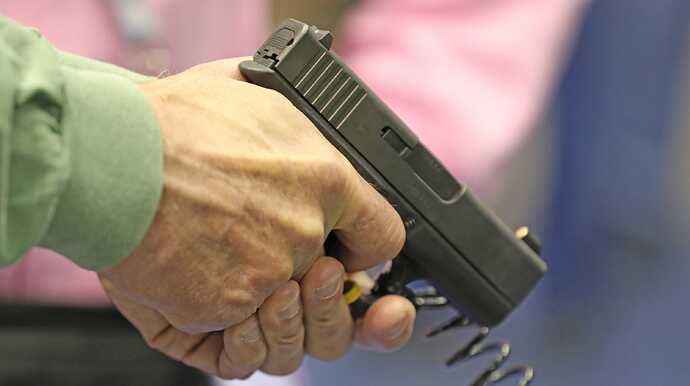 Gov. Holcomb signed a bill that eliminates the license requirement to carry a handgun in Indiana, despite opposition from state police head.

What does your church think about concealed carry in the church by members who are not on the security team?

Now you’re making my head hurt.
Does the church belong to the archbishop (i.e. institution) or the congregation?
Would you respect direction from one more than the other?
How much variance from team to team?
Don’t see that the Jesus God would care — Matthew 5:9

I agree that the state should have no authority to permit or deny — but the street outside belongs to Caesar, so you kinda gotta get there first.

Does the church belong to the archbishop (i.e. institution) or the congregation?

This gets complicated, and you can answer it in terms of property rights (which gets hairy- see the recent splits in the United Methodist Church) or in terms of religion (which can get even more complicated, since each religion is different, and each individual in that religion may have a different opinion).

I wouldn’t attempt to solve that problem, and no one here should really care what my opinion is. I just think it shouldn’t be the state’s business. If a religious organization has to hire outside lawyers to operate, something’s gone wrong.

Ok, I had a misinfotmrned/uninformed pastor.
I contacted the ArchDiocese and the pastor may give written permission. Apparently mine wasn’t up to date on this.
However, we also have a parochial school on the property that requires the principal to also grant permission, in writing. I’m retired so I have the time to shake it all out. Hell I’ll create the forms and a vetting procedure for them if they wish.

Thing was, if I abide by the law, and I do, and am in church unarmed while a shooter comes in. Let’s say I coulda stopped him before my spouse was killed, and I walked alive from the incident. That’d be all kinds of bad for everyone involved who prevented my ability to respond with legal lethal force.
Thank God all needs done now is some red tape sorted.

As for the right to self defense in a place of worship, my rights shouldn’t stop when I cross any doorway of any building. If it’s private property then I’m I won’t go in if u feel I can’t carry. But, fact is my being in a room while armed simply increases the level of security, no charge. If a place doesn’t have armed guards then no carry signs are, in my opinion, a simple way to tell me I’m not welcome. So be it.

Our Pastor and church security team acknowledge that we have more people carrying than not during service. We just don’t make a big deal about it. No sense in causing a scene if people are behaving themselves.

@MrBulldog Welcome to the community, we are glad to have you here.

Good question. At the front door, I have come across a few guys printing, and we have a discussion with them.
have found a lot of off duty cops that way.
Also, we have found a lot of people who don’t know the law. In the past, they thought that a CCW license gave them the ability to carry in church. Not in Ohio. We tell them of the law and quietly ask them to return their firearm to their vehicle.
And again, for people with the right spirit who are willing and able to pass a background check and an OPOTA qualifications course, there is room for help on the team.

Smiddy, If it was me, I’d ask that cleric why he just doesn’t have his congregration put up signs in their houses declaring them to be ‘sin-free zones’? Does he think that would reduce sin?
argh