Teens show us the way not to test it:

A Florida Teen Was Killed As He And Another Teen Took Turns Shooting Each Other While Wearing Body Armor, Police Said (msn.com)

Yeah, we have agreed on other threads, that Charles Darwin’s theory really works these days.

The bigger scarier question is what where they doing with a form of body armor and what was the plan if they succeeded?
Think we should have let them play cops and robbers and cowboys and Indians with BB guns, paintball, and air soft, now they have real guns and BODY ARMOR?
I had my dads lawn chair as a fort!

Have you ever watched the show, Jackass?

No, is it for public consumption?

NO! It’s to far beneath my intelligence level.

That is why you haven’t done stupid stuff like these Jack As shooting someone in body armor. And that is a good thing!

Kinda interested to know more about this “body armor”. I’d like to know it’s not the same brand as my own!

I’m with Jerzy, seems like these two are out to prove some people are just too dumb to get through life. Its very sad to see kids of this age not having enough ‘common sense’, which is apparently becoming much less common, not to shoot live ammo at each other. Interested to know if the parent and guessing/hoping gun owner, had ever talked with these kids about guns or gun safety or even just a conversation long enough to know they shouldn’t be able to handle a firearm. Another case of why you should always keep firearms locked up if kids are involved in your life.

I am definitely SMH over this caper. OMG what is the world coming to. There are so many other things they could have been doing instead of that. I don’t care if it was the greatest body armor ever made I would not wear it to test it.

one of the shots at Broad struck him in an area not covered by the vest.

The documents said that the boys had played this dangerous game before, but the bullets were stopped by the vest.

"The biggest misnomer is that they’re bullet proof because they’re not. They’re ballistic vests and they’re rated on scales of what type of bullet they’ll stop.”

Florida Teen Dead, Two Others Charged, After Shooting Each Other in Body Armor | Newsmax.com

Florida Teen Dead, Two Others Charged, After Shooting Each Other in Body Armor | Newsmax.com

Also some vests are only rated to stop single hits and even the multi hit rated vests will only handle so many before failing.

Do have to wonder what kind of firearm safety education these kids got growing up and how they got their hands on their “toys”???

I think I need to find a way to take a proactive approach to gun safety.

I think I need to find a way to take a proactive approach to gun safety.

Show them this:
Carabinier’s Breastplate from the Waterloo Battlefield - napoleon.org 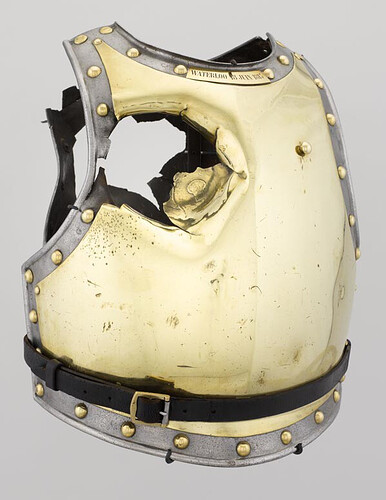 I can still remember when the Prez of (I think) Point Blank body armor would shoot himself in the chest with a .44 Magnum at trade and gun shows. That was called standing behind your product. As I recall he had to stop due to the legal beagles and because he became worth that much and he was 60 plus back then.
Body armor testing is one thing these but knuckle heads are beyond the pale.

Oh and by the way gun grabbers how did a couple of teenagers get a 9mm pistol and ammo?

Body Armor is not designed to take multi hits with high powered weapons,nothing is in fallable! Since the advent of any one can obtain body armor,I have started training for head,neck and groin