I had watched those videos of how ATF made their decisions but is totally wrong in their actions!

The White House is looking into the matter.

The article is short, so I’ll put the relevant bits here:

On Saturday the White House told the Washington Beacon that the administration would be looking into the ATF’s actions in order to ensure Second Amendment rights are not being violated.

The White House said, “The White House and leadership at the Department of Justice are reviewing this matter to ensure there is no interference with the ability of law-abiding citizens—including lawful firearms manufacturers—to exercise their constitutionally guaranteed liberties.”

A 60 day reprieve until after the election: 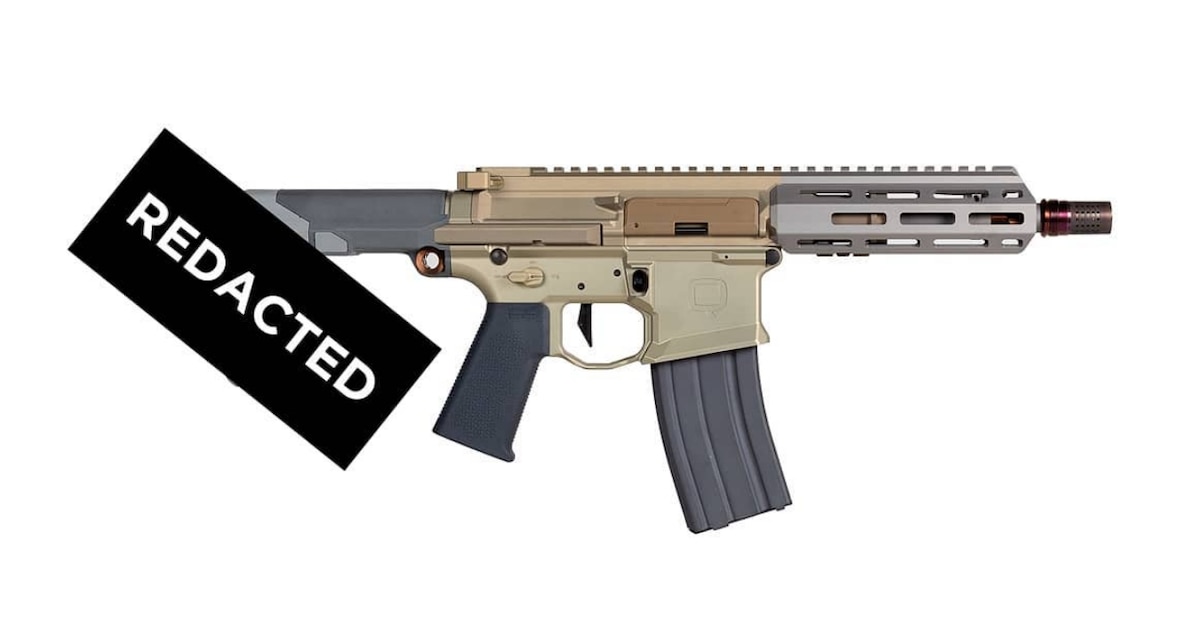 New Hampshire-based Q announced Wednesday that federal regulators have given the company's Cease & Desist order over its Honey Badger pistol a 60-day suspension.

I am quite surprised the ATFE even moved against an AR platform of any type since they had to eat crow and admit that an AR-15 is not even a rifle or a pistol (by their own legal definition) and let a guy go because of it. No I don’t think it is a political move but I have run across several ATFE agents that know less about firearms than they do about computers or cars. To quote a friend of mine “The badge is the power, the holder of the badge is supposed to be mindful of that.”

Check out the status of the ATF vs Honey Badger: https://bearingarms.com/cam-e/2020/10/15/atf-order-honey-badger-pistol/

Kevin Brittingham (owner of Q) holds a Q&A with Military Arms Channel. TLDR -> he’s not super happy about the situation

Thanks for the video! Good one to ponder on the outcome of our Second Amendments which I hope will not be eroded by the ATF, We would have to push for lawyers of gun owners to fight the battle for our freedom. Don’t vote for the Democrats or they will take your guns forever from you all! Wake up and we must abolish Soros’ world order and his Democrat minions! Train and we might have to fight ourselves someday down the road like George Washington dared the British!

Update from AmmoLand. They do not mention a source, so take with a hefty grain of salt…

Q, LLC is the only company to go public that the ATF sent it a cease and desist letter over a firearm with a pistol brace. Multiple sources have confirmed that the ATF has served additional companies with similar cease and desist letters. The ATF believes that certain manufactures have pushed past the legal boundaries of what is considered a pistol brace.

While AmmoLand News was able to verify that the ATF has recently sent out letters to other manufacturers it has not obtained the names of the targeted companies. It is not clear if these companies have received their cease and desist letters or if they will get the same 60-day stay as Q, LLC

AmmoLand News has been able to verify that the ATF has recently sent out letters to other manufacturers but has not obtained the names of the targeted companies.

I don’t know of any other company that is as attached between brace/firearm as Q is. Every other pistol maker that I can think of, just uses one of the existing braces from SB Tactical or Gearhead (for example) in their builds. So it is possible, that this ATF ruling is unique to Q.

Where there is smoke, there is fire. And from the beginning of the Q ordeal, there were rumblings that other manufacturers had also gotten letters. If you go back further to Congressman Matt Gaetz’s letter to the ATF in June which mentions manufacturers in the plural more than once this adds more credibility to that suspicion.

Some unwitting manufacturers, who supposedly failed to comply with these hidden standards, have already been forced by ATF to recall thousands of firearms for destruction from innocent customers. Other companies are currently being threatened by ATF to halt sales and recall existing products or face criminal and civil penalties.

Many tech companies, when issued subpeonas for access to people’s email (this is what Snowden leaked) were legally bound to “not tell anyone” about these searches. So there is some precedent for not discussing ongoing enforcement. Not saying its a good precedent, but its there nonetheless.

More news broken by Military Arms Channel (MAC), and reported on by several other guntubers. He posts an email from Wiley Rein a law firm specializing in the firearms industry. They note that the ATF has changed their rulings on pistols for importation. Basically this has expanded from just Q to all pistol firearms like an AR or AK pistol because they are now adding a subjective component on whether or not they think it is fireable with one hand. If it’s not a pistol… and its not a shotgun for rifle either… then it’s an Any Other Weapon (AOW) and falls under the NFA. Wiley Rein also emphasizes that because the rulings are private no one can know whether or not they have an AOW without submitting it to ATF for a ruling.

The ATF is generally skirting the President’s Executive Order by saying (verbally) this is not a final determination and is subject to change.

URGENT: PLEASE SHARE THIS IMPORTANT MESSAGE! This was sent to me for sharing (see link below). The law firm of Wiley Rein is one of the largest law firms in the firearms industry and represents a...

Text below for those of you who don’t use Facebook

This was sent to me for sharing (see link below). The law firm of Wiley Rein is one of the largest law firms in the firearms industry and represents a number of major manufacturers in their dealings with the BATF and regulations. This is NOT a joke nor is it speculation. This is a stark warning of things to come and I hope it prompts you to take political action.

This letter is about several things but primarily it is something you should take very seriously because of recent actions by the BATF that will affect any owner of AR15 pistols, AK pistols, HK pistols, etc. Yes, this means your Saint AR pistol or your Draco. That’s exactly what the ATF is targeting.

There are several things of importance in this email.

First: It goes against the Trump administrations Executive Order mandating such regulatory practices cease. The BATF has lead the charge is thumbing their nose at the President and his DOJ under the leadership of Attorney General Barr.

Second: Any firearm that has a barrel length that is too long, or the firearm is too heavy will be considered not importable by the BATF. No more pistol versions of rifles will be importable.

Third and the MOST IMPORTANT: Through unwritten interpretation of regulations and through private correspondence with unspecified companies, the ATF has capriciously and arbitrarily decided that ANY AR15 pistol, AK pistol, HK pistol, etc. is an ANY OTHER WEAPON (AOW) and thus is subject to the NFA and taxation. Any company who produces such firearms for sale in the United States and any consumer/owner of such firearms are either manufacturing or in possession of illegal AOW’s. This is being retroactively enforced. It does not matter if you bought a previously approved firearm. The only way you can be for certain you are not in possession of an illegal NFA item is to personally submit your AR15 pistol, AK pistol, etc. to the ATF for a determination. This can take up to a year and any letter given to you is only for you.

The ATF is getting around the EO’s by claiming they’re not making any permanent determination and their decisions are in essence fluid and subject to change.

When you were willing to hand over bump stocks, we warned you it was not about the bump stocks, it was about HOW they were doing it. This is why Gun Owners of America and I are suing the federal government. When they started talking about reclassifying braced pistols as SBR’s, you laughed and said people who bought them were stupid. Now, as we warned, they’re coming for your regular AR15 and AK pistols. Is it so funny now? WAKE UP!

Contact your representatives TODAY and tell them you will NOT stand for the ATF making such capricious and arbitrary rules thus turning millions of Americans into felons over night. Sit silent now and you will have no one to blame but yourselves for what comes next. GET POLITICALLY ACTIVE.

We are all in the “wait and see” camp. The only info you have to go on right now, is previous public ATF declarations that said X or Y brace is legal in Z configuration (LOP, OAL, etc). They are not making any public definitive stances against it, they are only ruling on whatever pistol they happen to be looking at, one at a time.

At some future point, ATF can come back with a blanket statement “All SB3 braces are illegal” and then we are all potential felons (literally millions of people).

Until then, as mentioned in one of the videos above, a local LEO sees your Banshee thinks its illegal, notifies ATF, then ATF comes in and looks at it and says “yes that’s illegal”. Its a case by case basis.

The best we can do right now is talk to your representatives. Very likely, GOA, NRA, etc will have another link for us all to contact them in an automated way but it might be a day or two. Even anti-gun representatives might be a little more open considering its election season (hey, we can hope right?).

You beat me to it! I was going to post that email I got from GOA too!

And also just posted, a shorter version with just MrGunsNGear

Well looks like I just might pull the trigger on an M-1 carbine in 9mm it is not an evil black gun. Lol

Just how long is your M1?

Is ATF Giving Trump An October Surprise Of Its Own?

A new interpretation of an old regulation could cause big problems for gun owners.

I do not understand the political play here. At all.

The top brass at ATF is supposedly anti-trump.

So if their goal is to help get Trump out of office… why anger Trump’s base? No one with any sense will blame Trump for the ATF’s actions, nor would they think it will get better under a Biden administration. So why ensure that those people will vote for Trump by making them angry and/or afraid? This seems counter-productive to their goal.