Are there any states that allow a felon to buy a gun?

Does anyone know? Really, I thought that I could find the answer to this question somewhere on USCCA but I don’t think anyone knows the answer.

I think this is on Federal level, not State’s. 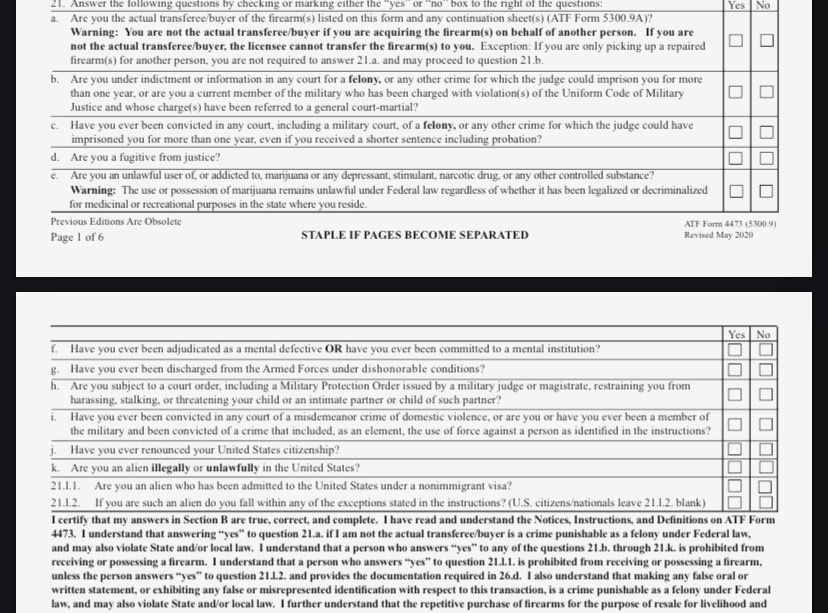 Not to put to fine a point on it, felons no don’t buy guns, they steal them. That’s not an official answer it’s the logical answer. If the elections go awry, murder and rape will be legal, just make sure you legally own yours!

If you answer YES to 21c you are prohibited from receiving and possessing firearm.

“Non-violent” convicted felons can possess and carry firearms in Indiana , but they can 't " buy " them because federal law overrules that. "Violent felons " in Indiana include murder, voluntary manslaughter, battery, kidnapping, rape or robbery. People convicted of domestic battery can 't own guns in Indiana .Feb 22, 2018

Federal law prohibits any person “who has been convicted in any court of, a crime punishable by imprisonment for a term exceeding one year” from possessing firearms.
18 U.S.C. 922(g)(1)

In many states and by federal law a crime punishable by imprisonment for a term exceeding one year” is considered a felony.

Non-violent felons can appeal to the court to have their voting and firearms rights re-instated. Otherwise, the answer is no, felons are disbarred the RKBA.

I am given to understand that in a number of states, anyone 18 or older may purchase muzzle loading black powder antique/replica/reproduction arms over the counter without any background check. This would include rifles, shotguns, and revolvers of the “cap and ball” variety. Carrying may be a different matter.

I remember a time when you could find a revolver blister packed with balls, caps, powder and grease hanging on a hook in sporting goods stores. Everything you needed to get started in one convenient package.

Annecdotal advise only. No warranty expressed or implied regarding the current accuracy of any statement. End user shall be solely liable for use or misuse of information presented here. YMMV.

anyone 18 or older may purchase muzzle loading black powder antique/replica/reproduction arms over the counter without any background check.

Yes, the ATF does not consider them firearms. However, your state’s laws might still make it illegal for felons to possess them.

I believe no felons can by firearms and I believe it’s in every state.

So this does bring up a rather interesting question. Many states like Florida are pushing to allow felons to vote. Would that mean they would automatically have a valid argument for having a judge grant exceptions?

If a State is found to have convicted someone falsely and that conviction is overturned or is rendered as “never happening” ( States use various terminology to dissolve the conviction), then that felon’s record is as if it never happened and they without question has all rights restored in such a manner that there is no longer a question that the said person be identified or considered a felon nor do they have to declare it in form 4473.
There have also been cases where convicted felons albeit for non violent crimes have been able to petition to have their rights restored. I’ve read several stories / cases pertaining to this. The percentages are extremely low and heard in a limited capacity basis. Meaning there’s no magic door or answers.
In most cases it’s nearly impossible but it has been done.

A question regarding restoration of rights.

If their rights are restored, how does that impact the federal system and law.

I believe because it shows up in their record that they were once a felon.

In Kentucky, in order to have firearm rights restored under federal law the charges must either be expunged or a pardon granted. As long as a criminal record shows a felony, federal law prohibits possession.

This should be corrected.

If it was a state charge, and the state reinstates the rights, the federal government should have NO authority or say in the matter.

If it was a federal crime, then it would and the felon would need to petition the federal government for the restoration of rights.

Federal or state, no matter the situation overrides any law for the possession of owning or carrying of a weapon by a felon is illegal. Personnel are updated in the federal database upon being deemed by a judge to have committed crimes that pertain to the law that make it a federal offense to own or possess a weapon, i.e. domestic violence, being committed voluntarily or involuntarily to a psychiatric facility, convicted of a misdemeanor or felony that prohibits a person from any handling of a weapons. Even falsifying the paperwork is considered a felony and carries with him a felony charge.

Welcome to the family brother and you are in the right place at the right time.

" As spelled out in Chapter 44 of Title 18 of the United States Code (U.S.C.), federal law bans convicted felons from possessing firearms or ammunition. (The U.S.C. is a compilation of congressional laws organized by topic and subtopic: Title 18 defines federal crimes and criminal procedure, and Chapter 44 (Sections 921-931) covers firearms.) It sounds straightforward enough, but when you unpack how that federal law works and factor in the complexities added by state laws and high court rulings, a much more complicated picture begins to emerge.

According to Section 922(g)(9), no one “who has been convicted in any court of a crime punishable by imprisonment for a term exceeding one year” may own or possess a gun. This rule covers all felo"nies, but does not apply to state misdemeanors that carry less than a two-year sentence. It also exempts several kinds of felonious white-collar crime, as well as felony convictions handed down in foreign countries [sources: 18 U.S.C. § 921; 544 U.S. 385; Williams].