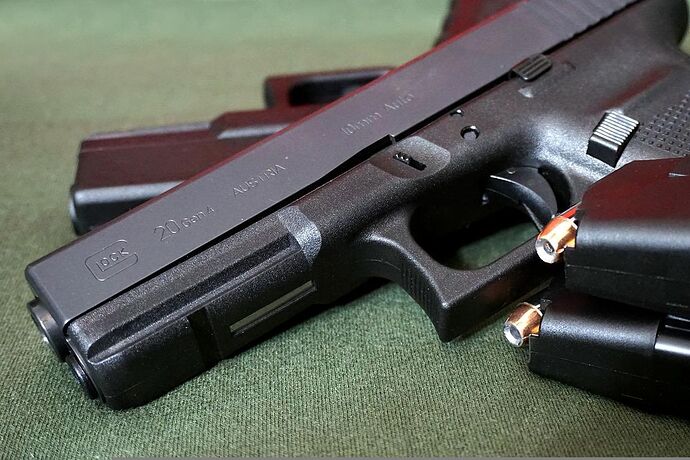 He was the good guy with a gun. The problem was he shouldn't have had that gun in the first place.

He’s in trouble with the law, but he’s alive.

This reminds me of our frequent conversations about carrying in a gun free zone. If you need a firearm, you’ll be glad you have one, but you need to know in advance that you will have some legal trouble.

A convicted felon with a stolen firearm is the manager of the restaurant? Sounds like my kind of place…

I’d say there is a pretty big difference between a prohibited possessor (convicted felon as in the article) compared to a legal owner who chooses to carry into a posted or legally defined gun free zone.
Still, it sure seems like the prosecutors could work a leniency deal on this fellow.

In many cases, a person who legally purchased their gun, but carries somewhere defined as gun free, is in fact committing a felony, also, in which case the only difference is whether or not the “legal” owner has been caught and convicted yet

As an aside, I don’t personally agree with convicted felons being denied the Right to keep and bear arms once their incarceration (actual physical custody in a secure facility) is done

I feel weird about this one, too. If someone has “paid his debt to society” (whatever that means) and is safe enough to release from prison, then why not restore that person to full citizenship? Unless the sentence specifically states that part of the punishment is the loss of voting rights or 2nd Amendment rights or whatever, it makes me uncomfortable that we send someone back into the world but subject him to second class status.

I don’t know, I suppose some people will say that if they don’t like it, they shouldn’t have committed a felony. But it just feels uncomfortable denying someone their full rights unless those specific rights have been abused (i.e. you can no longer vote because you committed voter fraud, or you can no longer own a firearm because you used one to rob a bank, etc.)

I concur. Once the sentence is served and square with the law, I think these rights should be restored.

I agree that someone paying their debt to society has already been punished and should be able to resume their citizenship with full rights. However, I think there are so many things wrong with our “prison system” that I’d be very hesitant to take any action on this until we can fix the issues with recidivism.

A violent convict that comes back out has paid their “bill”, but with our current system; can we fix the issue of them not going back to violence, and now we have allowed them to legally arm themselves?

It is a very complicated and many layered issue, and we should explore all avenues, but I’m sure there is not an easy solution.

If someone has proven themselves that unsafe, it makes no sense to let him and be like “no don’t go robbing any more liquor stores please” and expect that prohibition from having a gun will stop that.

Also, of course, way too many things are felonies, I would wager money that everybody in this thread has committed at least one felony they don’t know about.

I used to work a security job where I witnessed dozens of felonies, personally, in a single day sometimes. I’m pretty sure not one of them knew.

I mean, who would guess that a pocket knife with a 2.5" blade on a college campus (even in the parking lot while going to a sporting event) is a felony?

I would wager money that everybody in this thread has committed at least one felony they don’t know about.

The common phrase I hear is “3 felonies a day.” Critics say that is hyperbole, but many people acknowledge that the average “law-abiding citizen” unwittingly violates many laws just by living their life.

If someone has “paid his debt to society” (whatever that means) and is safe enough to release from prison, then why not restore that person to full citizenship?

I would agree with this in theory but the problem is that likely thousands of violent criminals who are clearly a threat to society are released every year. Often long before they pay the full price for their crime. Likely tens of thousands over the last couple years.

My workaround would be that all criminals would regain their voting rights after their sentence was over.

I think so too, except- as in the previous example- perhaps someone who has been convicted of an election crime might lose their vote as part of their sentence.

Sounds fair to me. Though I would go with a similar opportunity for them to be able to prove they are reformed and deserve to get their vote back at some point after serving their sentence.

U.S. Marine veteran, licensed to carry concealed, intervened and subdued an attacker in Baltimore. He didn’t even use his firearm, but because he had it on him and was within 100 feet of a public building.
After Marine veteran makes rescue, Baltimore police file gun charges against him | Fox News

The problem with all you posting about “once he has served his sentence” don’t know how the criminal “justice” system works. A felon released from prison rarely has “served his sentence.” Most felons are released on parole before the end of their sentence. There are terms and conditions when released on parole. One is to not possess or be in the area of any firearms. Another is that they are subject to search of person, vehicle or residence at any time by any law enforcement officer. There is some question whether a code enforcement officer is “law enforcement” but in CA they can be “safety members” of the retirement system which allows them to retire just like cops and firemen and a whole raft of other bureaucratic occupations that in my opinion are a stretch as far as “law enforcement.”

In CA, and I can’t comment on any other state, once a felon has been paroled and has completed his parole period and IF he commits no other crimes, he can petition the superior court after a certain period which I think is 5 years but if that is the million dollar question call somebody else, to be declared “rehabilitated”. Once declared as such he then is relieved of all penalties associated with being a convicted felon. He can vote, he can hold a government job. He can qualify for a military pension if eligible. But it is my understanding under federal law, he is still a convicted felon for purposes of possessing a firearm. (I believe it also includes anything that can be construed as a weapon but am not sure about that).

The Supremes in the black muu-muus in DC have questioned that. Would you believe Sotomayor is the one who raised the question during oral argument on another matter? We may see a challenge to that provision of federal law argued and at least one Supreme whom we would assume would think otherwise thinks it is excessive punishment, so there would be one vote in favor of abolishing that provision of the federal law.

But bottom line is that very damned few felons make it five years after being off parole before they commit another crime and are back in the cycle once again.

One is to not possess or be in the area of any firearms.

What is the difference between “allowing” them to be armed and not? We read daily of felons using firearms in the commission of crime. Somehow I doubt they are worried about any resultant “additional” charges for being a felon in possession of a firearm.

I don’t think any of us were referring to convicted felons who are continuing to serve their sentence on parole. Personally, I was referring to a person who had served (past perfect tense) a sentence and was now a free person, but faces restrictions due to the fact that s/he has a prior felony conviction. From my perspective, this is a completely different situation than a convicted felon who is still serving out a sentence, whether that’s in a penitentiary, on parole, as a condition of release, or a specific measure in the sentence.

It is an additional charge to be plea bargained away. Theoretically, the punishment for felon in possession is additional “must serve” time. In CA the “must serve” time was five years. That means that you must serve a full five years before you start your sentence for the crime you may have committed while armed. During that five years you are not eligible for parole review. It was a true sentence of five years. That was also the first allegation tossed when bargaining for a plea deal.

The feds have a similar crime on the books only it is eight year and ten years must serve. The only problem with that is that it is never prosecuted, at least in SoCal. In the 1990 the NRA actually provided funds for Operation Exile in, I think it was Roanoke, VA. they paid for an extra Deputy AG to prosecute felons arrested with a firearm. They were sentenced to federal prisons at great distances from VA, WA, CA, TX, MN, etc.It had a very salutary effect on felons in possession, Arrests for same dropped dramatically. Alas, it was discontinued after a year or two as costing too much money. SAY WHAT? It costs too much money to keep a felon off the streets, the primary purpose almost of government, to protect society in general from predators?

I wil quit there. My diatribe about felons who recommit is too long to recite here. It was what made me quit working in the court system. I was too outraged by what was going on. The courts don’t look kindly on employees who denounce the system in open court and I had to quit before I was so outraged I denounced what was going on while court was in session. Sometimes discretion is the better part of valor.

it was discontinued after a year or two as costing too much money. SAY WHAT? It costs too much money to keep a felon off the streets, the primary purpose almost of government, to protect society in general from predators?

It was Richmond, VA, and the death knell was due to it being “racist”.