Another Pro-Self-Defense Group is Censored on Social Media

As you know, I spent last week in Arizona attending the Well Armed Woman Conference. I had a great time getting some amazing women who were all about helping others be able to defend themselves and their families (sound familiar?).

In today’s political climate, I was disappointed by this announcement, but not surprised by it: 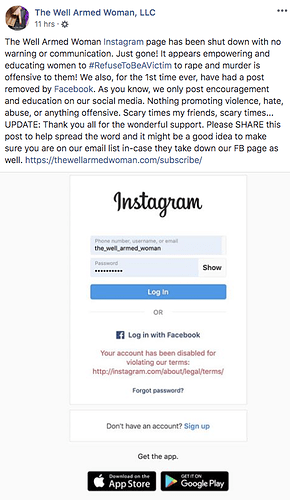 Which other groups you follow have been censored on social media?

Truly sorry. I am not really on social media so I don’t really have a horse in the race.

This is one of the reasons I don’t Facebook either… they can do as they choose and there’s no redress.

I rant ON Facebook ABOUT Facebook all the time.
I point out to them how they keep taking down posts that do not support their chosen political point of view.

I am actually surprised I have not received a ban or ended up in Facebook jail from some of my very pointed and blunt observations about their bias dealings with things that are perfectly LEGAL.

I’ve been to Facebook jail a few times. I’ve lost count of how many Pro 2A groups, and conservative groups have been shut down.

I’m shocked as well, @DBrogue! It looks like Facebook is censoring TWAW’s posts and going through older posts as well.

IMO Facebook is constantly moving toward the extreme left with their policies and views.

I use this with my friends often. 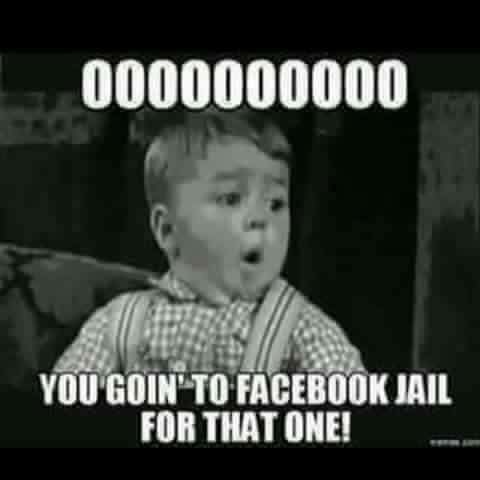 I was at a WAW event tonight and they said that the WAW Instagram page was restored this afternoon… I don’t Instagram but you may want to check. Also said it was restored based on a significant uproar, so maybe complaining did some good.

And on the other hand, Facebook removed photos (or posts?) from Carrie Lightfoot’s account with pictures of guns in them from YEARS ago… yes they reviewed her whole history of posting, it would appear. 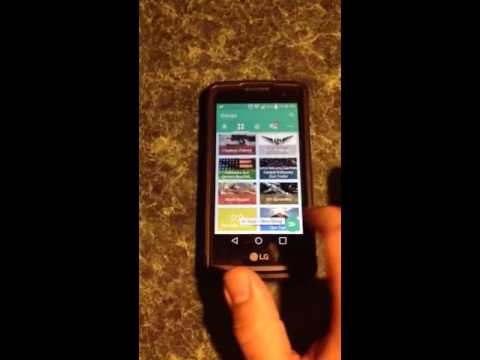 @KillJoy , what happened? Was there something specific about the post or was it just auto-flagged and removed?

Maybe you are being flagged by infiltrator sheeple who want to sabotage us.

I’m not sure. I could locate where to contact a moderator so I just made a couple of posts to get help.

I tried posting about that school shooter in Texas. My wife and daughter wer a mile away and there was another threat coming their way. My wife’s a teacher and my daughter’s a student in the same high school. Arlington TX

Let me check into it for you @KillJoy. If you posted in the Misc category - all of the topics in that category get reviewed by moderators before we post them. (We had a spell where there were more off-topic conversations on the Community home page than on-topic conversations.)

UPDATE: I believe a PM was sent to you about the thread you’re referencing. Please let us know if you have any questions.

As I said I do not tolerate censoring. My post was very informative, non political and relavent. School shootings are relavent. I may have place it in the wrong place by mistake but you @moderators could have moved it to the correct place. But you also censored my posts trying to explain. So. You lose 3 members for that not counting my wife. My two sons are on board with me.