Another Patriot Arrested for Free Speech

You have to ignore the first paragraph of assorted fecal matter to get to the story. 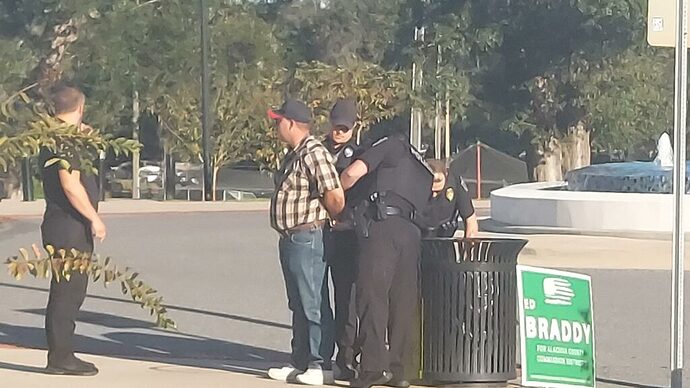 FL Patriot Arrested for Exercising 1A Right to Protect 2A Rights - Where Is...

FLORIDIAN’S FIRST AMENDMENT RIGHTS WERE VIOLATED AS HE ATTEMPTED TO PROTECT OUR SECOND AMENDMENT RIGHTS! var vvWindow={sitePadding:20,selectors:{main:’vv:main’},stripSelectorPrefix:function(){for(var i in...

I “clicked here” and it reopened the article. Perhaps the grievance is already filed?
Hoping the charge gets dropped and payback occurs.

Perhaps the ACLU will join him in a lawsuit against the police department that violated his 1st amendment protected right.

"This is about Chris Rose of Alachua County. Mr. Rose is a devout Florida Patriot and Freedom Fighter.

Well, this past Thursday, Mr. Rose was in front of the 20th Annual Ronald Reagan Black Tie & Blues Jeans BBQ, informing attendees that approached him that gun free zones don’t work. At no point was Mr. Rose disrespectful, argumentative, combative, or mean-spirited.

I was there with him, informing attendees that gun free zones don’t work and that they need to push for Constitutional Carry. But again, this is about Mr. Rose.

Someone inside the event didn’t like the sign Mr. Rose was holding and had the City of Alachua Police approach Mr. Rose to tell him to leave because it was a private event.

Again, the private event was INSIDE THE BUILDING, not outside. It was then that Mr. Rose and a few officers from the City of Alachua walked back toward a field next to the parking lot.

According to Mr. Rose, he had a twenty-minute discussion with law enforcement. And at the end of it, a supervisor in the department contacted the City Manager and confirmed that the sidewalks were not part of the event and Mr. Rose could be there peacefully.

Mr. Rose went back to where he was standing, at which point, he was told to leave by someone from inside the event again. Mr. Rose stood his ground and said “no.” He would not allow his First Amendment rights to be squashed, especially after being told that he could be there. That is when a different police officer detained Mr. Rose and charged him with trespassing." 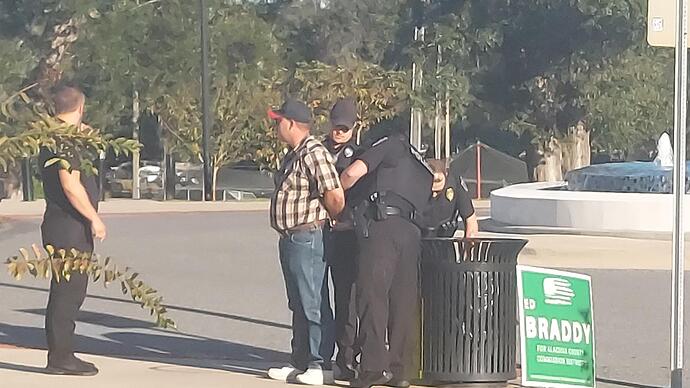 FLORIDIAN’S FIRST AMENDMENT RIGHTS WERE VIOLATED AS HE ATTEMPTED TO PROTECT OUR SECOND AMENDMENT RIGHTS! A great injustice occurred this week against a gun rights activist here in Florida. And with your help, I know that our loud voice – speaking out...

What payback? The charge is tresspass, a misdemeanor, no less unjust and annoying, but lets not expect more than the judge giving arresting officers a stern look as dismisses it.

Bottom line; I think people are starting to get it and taking steps in the right direction.
After a series of violent deaths on the subway raised concerns about safety in New York City, Gov. Kathy Hochul and Mayor Eric Adams on Saturday announced a plan to increase the presence of police officers in the transit system.

but lets not expect more than the judge giving arresting officers a stern look as dismisses it.

He was arrested for trespassing for being on a public sidewalk exercising his 1st amendment right. That could be a federal offense and the officer could possibly be sued because it is well established law meaning the officer loses qualified immunity-- as it should be.

If so, I hope it happens. Dont be like Gestapo!

Though personally I doubt anyone will sue.

That’s already been done, breathing on a public sidewalk without a mask.

I looked at a public sidewalk by mistake, can someone bail me out?

What’s next, breathing on a public sidewalk?

I think that’s already been done… 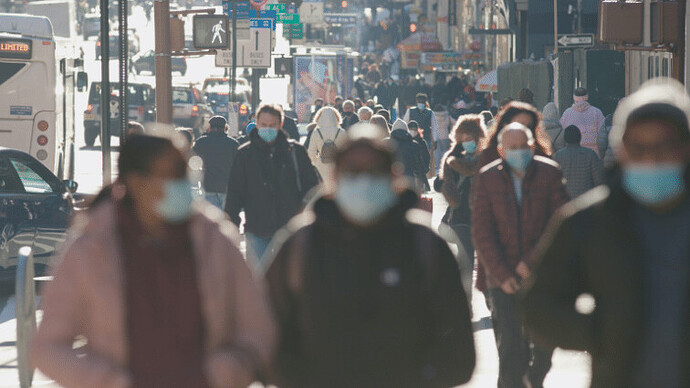 That’s already been done, breathing on a public sidewalk without a mask.

oh shoot, I should’ve finished the thread before opening my mouth.

@mattm Did you click on “Source link” after “Thank you” at the end of the letter? It’ll take you to the site to respond to the case.

Thank you, that worked…at getting me on another list

…oh well, such is life

We need to stand strong together all across our country.

Good bet the arresting officer was NOT an Oathkeeper.

“Oath Keepers, an organization for peace officers and soldiers who adhere strictly to the letter of the Constitution and swear not to obey any orders that they believe to be unconstitutional.”

Who Are the Oath Keepers? - Patrol - POLICE Magazine

an organization for peace officers and soldiers who adhere strictly to the letter of the Constitution and swear not to obey any orders that they believe to be unconstitutional.”

Wait… isn’t that already part of their oath? I guess I’m not clear why any officer needs to take an additional oath to uphold the law and to disobey unlawful orders.

Agree, but as in this case some CHOOSE to not follow their oath, the first one they take.