“Are you worried that when you sell these kits somebody will do the unimaginable with them?

“Are car dealers worried when they sell a car to somebody that they will run it through a crowd of people?

“Do you see those as the same?”

“So don’t you feel guilty about posting this video?” Should be the next question.
So don’t I feel guilty when someone gets shot or run down by a car? Yes i do that is why I carry a gun to protect people and drive defensively.

Wow, what a bunch of bovine excrement. The sheriff claims the only people that manufacture firearms for personal use are criminals? So, all the people that I know that have built firearms for personal use are criminals? How is that all of them passed background checks, own numerous other firearms that were purchased through FFLs and all have permission slips from the government “allowing” them to conceal carry? Apparently their criminal conduct is just as apparitional as their “ghost guns”.

The ATF agent was just as bad. Not only did he not explain how serial numbers prevent crime, he openly admitted that prohibited people are not obeying the law and are obtaining firearms. But somehow a firearm with a serial number will stop that? Hmmm, what about all the millions of firearms used in crimes that have serial numbers?

Then one of the most obtuse statements, we need federal laws on “ghost guns”. We have laws on personally manufactured firearms, and criminals are not “allowed” to manufacture nor own them either. Have federal and state drug laws (and including international laws) prevented the distribution, sale and use of “illegal” drugs? But serial numbers on personally manufactured firearms will prevent criminal use of those firearms? The vast majority of firearms used in the commission of crimes have serial numbers… Oh, yes, I forgot, this law is the one that criminals will obey…

So, all the people that I know that have built firearms for personal use are criminals?

It certainly seems to be the goal of the anti self defense crowd to retroactively declare that anyone who has ever legally built, bought, or owned a firearm be declared a criminal and punished accordingly.

Not sure if I’m missing something, but this does not look like an at-home kit that they are trying to stop. I’ve never seen a “Ghost Gun” kit with a metal lower. This looks like it was a “Ghost Gun” from a serial number being filed off… 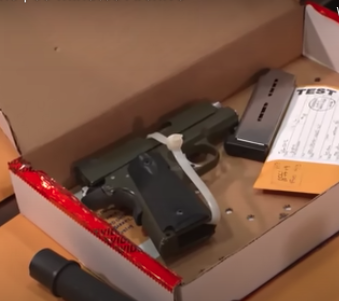 You can get lower receivers that are metal.

That is one of the sneaky little intentionally misleading things going on regarding “ghost gun” propaganda. Pump the numbers up by counting anything with damaged/destroyed serial number

Raw unfinished 1911 frames as well. A member of this forum has made a few beautiful finished pieces.