For some time now, I’ve been wanting a 5.7x28, specifically one with a threaded barrel as im waiting on a can that is for 22lr but rated to handle 5.7x28.

With the threat of 114 passing in Oregon, I may have only a short time to pickup some new platforms and their mags…

The carbine is nice but having another pistol would be nice also as it could be carry concealed (i know, thats a big platform to conceal).

Other downside, its another kind of ammo I would have to buy and is still very expensive.

The other thought, is to just stick with 5.56 and go with a small platform such as the JAKL, benefit there, a caliber i already own, same mags, less expensive ammo, larger platform, cant use the .22lr supressor but it gets a few hundred FPS faster.

Given 556 I already have, I’m leaning that way but im curious on others opinions…

A perk to the JAKL, if they finally release the 300BO upper, if our 114 gets passed. I may be able to get the upper…

I think it depends on your individual situation. I have a 5.7 handgun and I love it, but I can’t afford thousands of 5.7 rounds for training. It’s simply too expensive for me right now so my self-defense firearms are 5.56 and 9mm. They are more affordable and proven to be reliable.

I will be finishing my 300BLK build soon and that ammo is more expensive but can be used for both self-defense and hunting.

5.7x28, 'cuz more money for less performance is how we roll!

I got all hot and bothered when the Ruger 5.7 came out. I got over it. Now glad I didn’t jump. A 6.5 Grendel upper has been on my mind, but ammo price keeps me mainly on the NATO rounds, along with lots of .22 lr 'cuz plinking and .45acp, 'cuz 1911 and big barreled pistols…and God

I admit the 5.56 is more readily available. It’s cheaper to shoot. I have a FN 5.7 pistol and carbine. Loud and fun. The 5.7 virtually has no recoil. Decisions-decisions. I got the PS 90 carbine at a very reasonable price and my wife loves the 5.7 pistol, go figure. I think these things are best weighed by want and then need. Everything can have a purpose but that decision is yours. Good luck deciding. I like both.

A perk to the JAKL, if they finally release the 300BO upper

Not sure about the laws in your state but it’s relatively easy to swap barrels/calibers on a normal ar upper. Had to look up the jakl and I don’t know what all is standard ar compatible.

As far as short barrels are concerned 5.7 is the winner as far as gunpowder intended for short bbl applications. It thrives with True Blue which will work in normal auto loading cartridges. 300 blackout does well in shorter barrels. It works great with Hodgdon H110 powder which is appropriate for magnum revolver cartridges. The worst cartridge for short barrels of the three you mentioned is 223/5.56 because it requires “rifle powder” which is too “slow” burning for any normal pistol or revolver cartridge. It sacrifices a lot when fired in short barrels. You get a huge muzzle flash and a ton of noise.

That’s my two cents of input.

Good time to bring this link up again.

The 223 in a 5” barrel is slower than a 5.7 in a 5” barrel. Plus the 223 uses about four times as much gunpowder which just becomes blast in the short barrel.

While I love my Ruger 57, the ammo cost keeps me working with my 9mm handguns, simply because of price.
I only take the 57 out for fun once in a great while.
If the ammo came down in price I would definitely be spending alot more time with it

If the ammo came down in price

That volume won’t come up, though.

And there is literally 0 chance it will even sniff the kind of volumes 9mm and 5.56 have. Pipe dream.

Think the 5.56 makes much more sense from a cost and effectiveness standpoint. You could always take the money you save on expensive 5.7 ammo and put it towards a 5.56 rated suppressor if you want that option as well.

In addition to, and to reinforce what everyone else has already posted:

I like the idea of interchangeability of ammo in both handgun and carbine, but the price is still high. I buy enough expensive ammo (.458 SOCOM, .300 AAC) so adding a new more expensive caliber is anon-starter for me. However, I have been giving serious thought to buying a 7.62x39 AR-15 upper just to take advantage of the cheap ammo.

But do whatever your lifestyle, planning, and wallet supports.

NOW, don’t get me wrong. YOU have to decide what you NEED this for. If it is a want, do whatever tickles your fancy. But if this is a NEED, I’d go for very common calibers.

Id recommend against the 7.62x39 upper for an AR, even with specialty mags, there can be feeding issues, you will suffer from broken extractors and likely need an enhanced firing pin and hammer spring to fire steel case unless you are going to run nothing but brass.

So $30 of parts to upgrade and ten minutes to install?

Broken extractors? Was it overgassed? 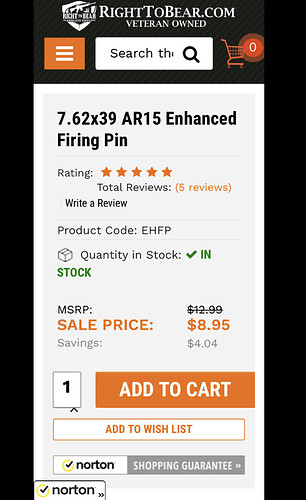 Not overgassed, given the tolerances of the extractor, they have little meat and are prone to breaking more, especially with steel case…

Plus they stick casings a bit easier, especially if your get your cycle rate up…

I did like the 7.62x39 uppers but ended up selling them for an actual AK and I love the AK more for that caliber… 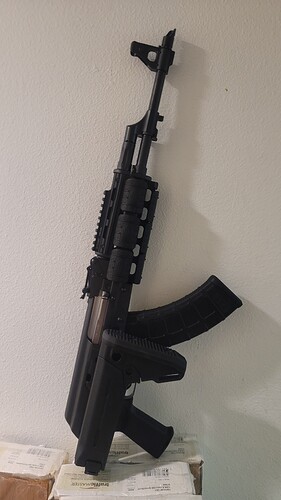