Would you have intervened, or maybe even used a weapon here?

Kids gets beaten by random adult on the bus. Would you intervene?

(Maybe let’s just skip past the “I wouldn’t ever be on a bus in LA” comments.) 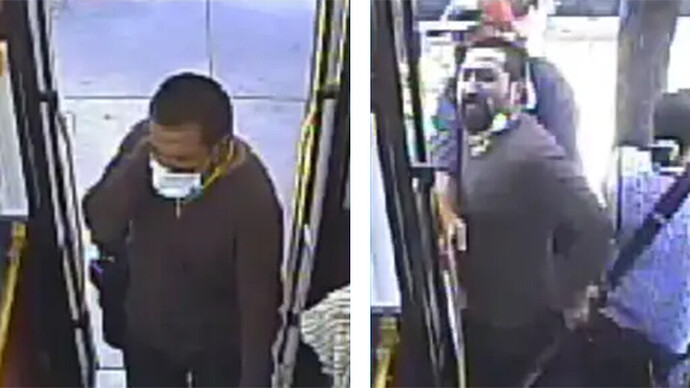 California boy, 12, attacked on bus in Long Beach, says no one tried to help

A 12-year-old boy in California was punched multiple times in an unprovoked attack Sunday while riding on a bus to visit his grandma in Long Beach, according to his father.

Intervening vs using a weapon are different things. Would a reasonable person think the child’s life is in danger? Was the man slapping and pushing the kid, of did he strike him with closed fist, etc. The article doesn’t mention hospitalization, so… I’d guess, weapon use was not justified.

This is not to say, someone should have yelled at the grown man, and stuck a camera in his face demanding he stops. Since it appears we have a bus full of cowards here, we don’t know if attacker would back off or escalate.

“The guy sucker-punched my son and hit him right in the face and just got to whaling on my son for no reason and of course, this is disturbing,” Brown said. “My son tells me that the guy then grabbed his shirt and slung him around to the other side of the bus and continued to beat on him”

Presume it was a bunch of face punches…

I cannot honestly presume that, because a bunch of face punches is a bloody business, and there would be an ambulance taking the boy to ER. We have a case of poor reporting, as usually.

But for the sake of argument, an adult striking a young child (12) with a closed fist in the face multiple times, presents a danger to child’s life. I believe a reasonable person would agree. So, if that were the case, you can and should protect a child from being murdered by an adult criminal.

Ok article states boy was sucker punched. A grown man attacked a child. The cowards did not attempt to stop it. Child beater walked off bus. Someone asked if they should call 911. REALLY… . They have bad guy in custody. How do these people sleep at night?

It’s hard to believe that people like this are free to walk the streets. I am angry that no one on that bus did nothing to help that child. That boy could have been killed by some psycho and those cowards could have out numbered the attacker and brought the attack to a stop. I could not stand by and watch this. What ever happened to people doing the right thing.

I suspect that anyone with a pulse would be upset over this, but the litigous society we’ve created nearly prevents anyone from stepping in. Many, me included, would be concerned about the harm I would be putting my family and friends in for being involved. It is pretty sickening that this is what an advanced society looks like.

be concerned about the

Surely there are times when a person can not be concerned about themselves & takes care of the business at hand.

Yes, but everyone isn’t wonderful (despite what the Ds might tell you). If you’ve ever had one of these low end losers try to take everything from you or from your family, you may feel differently. it isn’t a bravado contest with no repercussions, sadly.

Man beats child on bus, eventually gets taken into custody, then gets bailed out by Harris’ Freedom Foundation, gets right back on the bus, rinse repeat.

Definitely 100% would have intervened. That situation posed a life threatening scenario for the child victim and others on the bus. Any of those blows could have resulted in a deadly outcome. Infuriating.

At least, the attacker was wearing a mask when he boarded the bus

Seriously now, I definitely won’t sit there quietly as if it’s not happening. I definitely would at least say something and hope it doesn’t escalate from there.

Bravado no don’t think so. Sometimes even a guy like McFly has to stand up & take a risk.

“Police said he was arrested without incident and charged with child cruelty, assault, battery, and other public transportation-related charges.”

Notice he wasn’t charged with attempted murder. It seems dubious whether lethal force could be utilized to stop the attack. Kicking the guy in the nuts, absolutely!!!

Hell yes I would intervene. It’s sad that a bus full of people watched, but no one would do a thing about it…

LA area buses used to be a part of the RTD, and acronym for Rapid Transit District. Yet having to ride the bus for middle school we better called it the Rough Tough and Dirty.

Fast forward to today, it can be a wretched ride filled with scum and villainy.

The LA county Sheriff’s will sometimes ride on the trains looking for valid passes, with K-9 units all tac-geared out.

I can’t understand why no one would jump to the aid of this child. Yet these days it seems that people are less likely to do anything to help.

The question posed is: " Would you have intervened, or maybe even used a weapon here?"

Yes I would have intervened with hands only. Drawing a weapon on that bus at that time for what was described at the moment would not be something that I would personally do. It’s very telling what our society has become by the non-actions of the rest of the passenger and the driver.

My question is, maybe I’m missing something here, why did the father not intervene? If it were my child I would have stepped in without hesitation. Now, would I step in if it weren’t my child, I would like to say yes as we all would, maybe try to devert the perps attention. They are in California, so likely if you step in, with their crooked laws he could file assault on whoever stepped in and win and they spin the whole thing to be your fault.